On Not Fearing Infinity: Theodore Roethke’s “The Far Field”

There come times in every life when we turn a corner. Big notable birthdays, graduations, jobs. Recoveries from accidents, addictions, illness, broken relationships. Blinding insights into Where We Have Erred and What We Must Do.

The resilience these losses require.

And then we come to facing the loss of our very own selves into the great beyond, there to be grieved over by others (or so we hope!). The living, breathing, animated self we were, now gone silent and still at last..

At one level—and early stages of life—we can barely imagine a world without us in it. But the imagining impinges on us as we age, those notable birthdays becoming all the more notable still. And somewhat confoundingly, the gap between them seems to grow ever shorter, the days and months racing by even as our bodies and minds move at far less than the racing speed we once knew.

Fortunately, there is a remedy available for the foreboding thoughts our own demise can engender—simple grace. Not of the religious type, dispensed by some deity of infinite compassion and forgiveness, but a grace of our own making, a “simple elegance or refinement of movement,” or “courteous goodwill.”

Similar to the kind of grace exuded by the poet Theodore Roethke (pronounced “Roth-key”) in one of his final poems, “The Far Field,” published in the volume of the same name in 1964, a year after his untimely death from a heart attack at age 55. 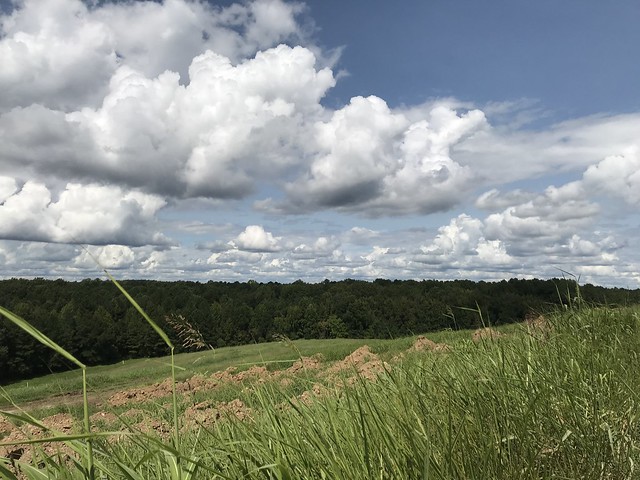 Roethke’s poems range far and wide, from odes to the natural world to memories of romping through the huge greenhouses his father and uncle made their living at through Roethke’s boyhood in Michigan. From reflections on his mental illness to love poems and nonsense rhymes suitable for children.

“The Far Field” shows him at his most elegiac and reflective, a man looking back at his life “with his feet before the fire/In robes of green, in garments of adieu.”

This imagery of regal acceptance and peace stands in contrast to the sad fact that Roethke, like many artists, had led a life of inner intensity and sometimes unbounded exuberance. These manic-depressive episodes could entail fevered creative periods alternating with alcoholic binges and hospital stays.

Did he perhaps sense his time here would not be long even at the relatively youthful age he was when writing this meditation on death?

Well, he was certainly imagining it, reflecting a deep immersion in feeling and the words he wrung from it in some of the most gorgeous imagery ever conjured about the end of life.

The poem, printed en toto below, is a bit longer than the ones usually discussed here, but its images and rhythms carry us effortlessly through its four sections and 10 stanzas, our senses fully engaged from the get-go. Roethke is nothing if not a friendly and musical accompanist to the joys, quirks and questions that propel our lives.

The first stanza reveals the narrator’s repeated dreaming of journeys, one of them out a long peninsula, alone, with no traffic, snow dotting the windshield, the road turning from blacktop to loose stone, the car finally coming to rest in a snowdrift where the tires spin and the headlights eventually darken.

It’s a potent image of impending death and the fact that no matter how many loved ones “surround” us at our end, ultimately we leave this plane alone, letting go in a literal sense of all the life we have ever grasped, mistakenly thinking it was ours to keep. The poem would be troubling were it not for all the uplift of memory and nature, sensory delight and spiritual questing that follow. Let’s read it now before returning for some concluding discussion.

I dream of journeys repeatedly:
Of flying like a bat deep into a narrowing tunnel
Of driving alone, without luggage, out a long peninsula,
The road lined with snow-laden second growth,
A fine dry snow ticking the windshield,
Alternate snow and sleet, no on-coming traffic,
And no lights behind, in the blurred side-mirror,
The road changing from glazed tarface to a rubble of stone,
Ending at last in a hopeless sand-rut,
Where the car stalls,
Churning in a snowdrift
Until the headlights darken.

At the field’s end, in the corner missed by the mower,
Where the turf drops off into a grass-hidden culvert,
Haunt of the cat-bird, nesting-place of the field-mouse,
Not too far away from the ever-changing flower-dump,
Among the tin cans, tires, rusted pipes, broken machinery, —
One learned of the eternal;
And in the shrunken face of a dead rat, eaten by rain and ground-beetles
(I found in lying among the rubble of an old coal bin)
And the tom-cat, caught near the pheasant-run,
Its entrails strewn over the half-grown flowers,
Blasted to death by the night watchman.

I suffered for young birds, for young rabbits caught in the mower,
My grief was not excessive.
For to come upon warblers in early May
Was to forget time and death:
How they filled the oriole’s elm, a twittering restless cloud, all one morning,
And I watched and watched till my eyes blurred from the bird shapes, —
Cape May, Blackburnian, Cerulean, —
Moving, elusive as fish, fearless,
Hanging, bunched like young fruit, bending the end branches,
Still for a moment,
Then pitching away in half-flight,
Lighter than finches,
While the wrens bickered and sang in the half-green hedgerows,
And the flicker drummed from his dead tree in the chicken-yard.

I learned not to fear infinity,
The far field, the windy cliffs of forever,
The dying of time in the white light of tomorrow,
The wheel turning away from itself,
The sprawl of the wave,
The on-coming water.

The river turns on itself,
The tree retreats into its own shadow.
I feel a weightless change, a moving forward
As of water quickening before a narrowing channel
When banks converge, and the wide river whitens;
Or when two rivers combine, the blue glacial torrent
And the yellowish-green from the mountainy upland, —
At first a swift rippling between rocks,
Then a long running over flat stones
Before descending to the alluvial plane,
To the clay banks, and the wild grapes hanging from the elmtrees.
The slightly trembling water
Dropping a fine yellow silt where the sun stays;
And the crabs bask near the edge,
The weedy edge, alive with small snakes and bloodsuckers, —
I have come to a still, but not a deep center,
A point outside the glittering current;
My eyes stare at the bottom of a river,
At the irregular stones, iridescent sandgrains,
My mind moves in more than one place,
In a country half-land, half-water.

The lost self changes,
Turning toward the sea,
A sea-shape turning around, —
An old man with his feet before the fire,
In robes of green, in garments of adieu.

A man faced with his own immensity
Wakes all the waves, all their loose wandering fire.
The murmur of the absolute, the why
Of being born falls on his naked ears.
His spirit moves like monumental wind
That gentles on a sunny blue plateau.
He is the end of things, the final man.

All finite things reveal infinitude:
The mountain with its singular bright shade
Like the blue shine on freshly frozen snow,
The after-light upon ice-burdened pines;
Odor of basswood on a mountain-slope,
A scent beloved of bees;
Silence of water above a sunken tree:
The pure serene of memory in one man, —
A ripple widening from a single stone
Winding around the waters of the world. 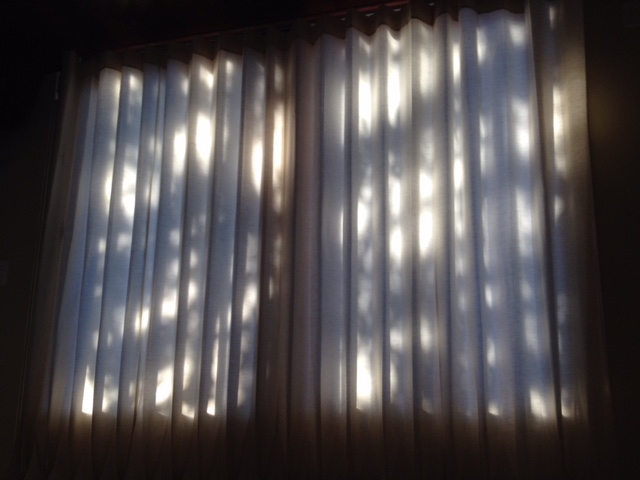 Part of why I have always loved this poem since coming across it some 40 years ago is the easy interplay between Roethke’s musings about the end of life and the ardor he exhibits for the elemental aspects of nature that fuel his poet’s heart. He will die, the narrator will, as did the young birds and rabbits whose mortal mishaps he mourned in his youth, but for which notably, his “grief was not excessive.”

Why? Because life goes on, the abundance of “warblers in early May” causing him to “forget time and death.” (If only for the moment.) 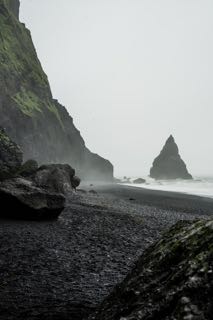 From his consideration of those warm-blooded creatures, we then behold Roethke in his childhood, lying “naked in sand…/fingering a shell,” using it as a jumping off point to contemplate the different states of existence, imbuing them all—animate, inanimate, mindful and mindless, and in his power dreams, even a fierce lion—with the reverence due all creation.

More than almost any of our poets, Roethke moves with ease from the playful to the cosmic to the concrete, a peculiar kind of secular religious poet prone to meditating on “the windy cliffs of forever,” which is a perfect example of him fusing images of the particular (windy cliffs) with the abstract and inscrutable “forever.”

Then there is “the dying of time in the white light of tomorrow” (abstract), followed by a succession of death metaphors with clear images (“The wheel turning away from itself,/ The sprawl of the wave,/The on-coming water”).

All of it just right for a man whose mind moves “in more than one place” and realm, “in a country half-land, half-water.”

Later, he states he is “renewed by death, thought of my death,” likening it to the profound sensory image of “the dry scent of a dying garden in September.”

And then the dying man, rising already, sees perhaps for the first time not his impending erasure but instead his “own immensity,” the project of building a Self finally coming to fruition in his realization that “all finite things” (such as himself) “reveal infinitude.”

Surely this is the mystical core of all religions: that what we do and how well we love within this finite realm is a matter of infinite importance. Literal takes on religion seek to reward us for that effort by punching our ticket to some celestial hereafter, but mystics such as Roethke have always harbored a vision both wider and more acute.

For them, the awareness of death sharpens everything in this life, brightening it to an almost unbearable, but therefore all the more precious, sheen. In that realm, all the heaven we could ever want is sprawled out before us, moment to moment…

As children, that can mean contemplating a seashell or allowing ourselves “to sink down to the hips in a mossy quagmire/Or, with skinny knees, to sit astride a wet log.”

Later, it means listening for “the murmur of the absolute” as it fields our questions about the “why of being born.”

With our spirits moving “like monumental wind,” we join with the universal spirit that animates and undergirds all life. In this world of the far fields and wild grapes and trembling waters, we do well to remember—or perhaps just claim for the first time—that every piece of it is laden with importance.

That very much includes ourselves, each of us “a ripple widening from a single stone,” heading for a rendezvous with the much larger and ultimately serene stream of existence that will forever be “Winding around the waters of the world.”

Field and clouds and dark curtain by Andrew Hidas  https://www.flickr.com/photos/andrewhidas/

6 comments to On Not Fearing Infinity: Theodore Roethke’s “The Far Field”