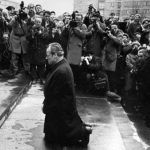 Just as we cannot truly love ourselves until we reckon with the whole of ourselves—our wounds, conflicts, vulnerabilities, aggressions both overt and passive—neither can we truly love our country until we have looked long and hard and beheld its shadows. This is where the “Love it or leave it” sensibility has always been so woefully off base, revealing a shallow patriotism, bathed in stagnant waters of denial.

To acknowledge faults is not weakness but strength and fortitude for the long haul, putting us in right relation with others and the world. This redounds ultimately back to ourselves, the circle of love, acceptance and forgiveness complete.

Yet here we are, 50+ years along, eight of them under a historic first black president—and the catalog of martyrs to the cause of liberation continues to expand.

Willie Brandt knew this, and he carried that knowledge into one of the historic moments in history in 1970.

Brandt was the democratically elected chancellor of West Germany at the time, and his task on that December morning was two-fold: to sign a treaty acknowledging new borders with Poland, and while he was there, to lay a wreath at a monument to the Warsaw Ghetto Uprising, a seminal event in Jewish and Polish history.

The uprising saw some 13,000 Polish Jews massacred in Nazi-occupied Warsaw, about half of them burned alive or suffocated in a systematic German torching of the ghetto where Jews had been relegated while awaiting their ultimate fate of boarding a train headed for Auschwitz.

As Brandt approached the monument, he suddenly and unexpectedly dropped to his knees, staying there for some 30 seconds, onlookers caught dumbfounded and cameras snapping like mad. The tacit apology, which Brandt always claimed was wholly spontaneous, quickly shot around the world as the kind of gesture both gracious and rare—a head of state asking for another state’s forgiveness in the most humbling and meaningful fashion possible.

Years later, he explained it this way in his memoirs:

“As I stood on the edge of the Germanys’ historical abyss, feeling the burden of millions of murders, I did what people do when words fail.” 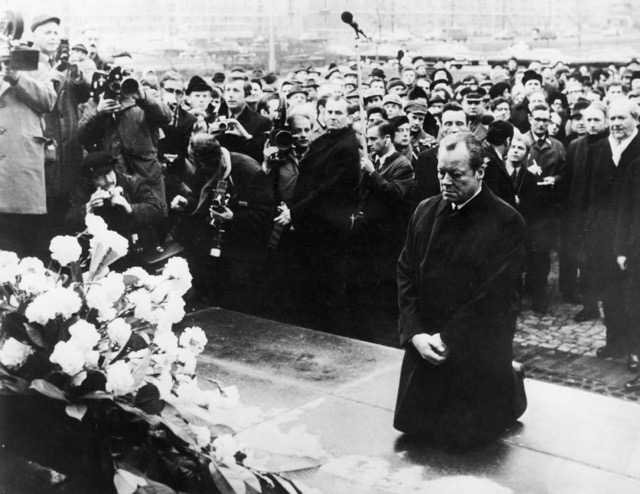 Gazing at the photographs and descriptions of the riots engulfing Minneapolis, Louisville and other cities the past few nights, fearing that the violence and desperation will only spread, I can’t get the photo that has spawned the most recent turmoil out of my mind. It’s of George Floyd prone on the asphalt, his face wearing the blankness of the dead, as a police officer casually keeps his knee on Mr. Floyd’s throat, looking up toward his fellow officers as if he were carrying on a conversation about the weather as the life underneath his knee expires.

It is surely one of the most heartbreaking photos in recent American history, recalling entirely too many others from eras we thought were part of our dark but perhaps distant past.

How forlorn that hope now seems in the wake of recent events.

Nearly 5 million people hit the Like button on this Instagram post below from basketball titan LeBron James a few days ago. The juxtaposition of “taking a knee” imagery could not have been drawn more sharply, pitting casual terror against reverence, unfeeling thuggery against a profound statement of conscience.

Former NFL quarterback Colin Kaepernick has been effectively blacklisted by the league’s owners the past two seasons for his quiet protest of taking a knee during the playing of the national anthem. Until yesterday, when former executive Joe Lockhart acknowledged the blacklist, no one would say it out loud, mumbling as if rocks in their mouths about his “style of play” mumble shumble “doesn’t fit with our system” grumble shlosh bumble.

This while players of zero experience and mediocre talent continued to be signed to multi-million dollar contracts.

Kaepernick, talented, still just 32, stays in shape in hopes of returning to the game he loves. Meanwhile, his Wikipedia entry lists him as “an American civil rights activist and American football quarterback.” On Friday, he offered to assist in the legal bills of protesters in Minneapolis who had been taken into custody.

It was the same day that Minneapolis police officer Derek Chauvin was indicted for the murder of George Floyd. He, like Kaepernick, has lost his job. 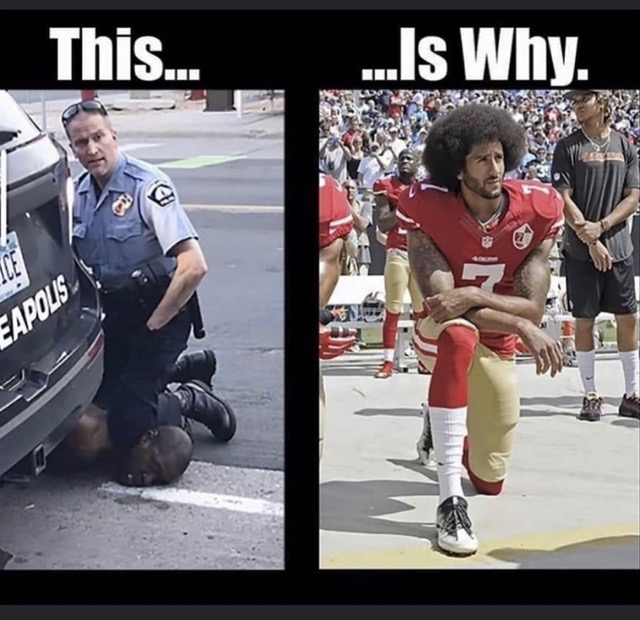 Almost 53 years ago, Martin Luther King, Jr. addressed the 11th annual gathering of the Southern Christian Leadership Conference, the civil rights organization he had founded with several compatriots and which he served as president until his assassination in 1968. The address, available in full here, was part celebration of all that the organization and the larger movement had helped accomplish with targeted boycotts and other actions seeking to secure a place for the “Negroes” in the political, social and cultural life of America.

It was also part forewarning—that the “work” was hardly done, many obstacles and much suffering no doubt still lay ahead, but that black Americans were nothing if not resilient and steeped in the hope that King himself marshaled and projected so eloquently through even his darkest days.

The speech is a bracing read these many years later, given the generally upbeat tone King effects in describing “dramatic” and slightly lesser successes in housing, education, employment, finance, and other matters his organization pursued amidst the kind of shutdown and shelter-in-place that black America had been forced to endure over the centuries.

Those successes were real, and have been followed by many others on the jagged and bumpy road of justice that African Americans have always traveled at their own considerable peril.

Yet here we are, 50+ years along, eight of them under a historic first black president—and the catalog of martyrs to the cause of liberation continues to expand.

Trayvon Martin and Michael Brown, Eric Garner and Philando Castile, Walter Scott and Freddy Gray, Breonna Taylor, Ahmaud Arbery and George Floyd. This is a tragically partial list of everyday people caught up by what increasingly seems to be depressingly ordinary, same ol’, same ol’ circumstances of dying at the hands (or knee) of police or self-appointed vigilantes.

King himself had attempted to answer that question in another speech about a year and a half earlier. It was at the conclusion of the Selma-to-Montgomery March for voting rights in 1964, when, in the soaring rhetoric of the black preacher he was, he intoned:

Was King, pictured in prayer below before he was to enter jail in Selma for an act of civil disobedience, right? Surely, he was right to live in hope, given the dread-full alternatives. But was he correct about that arc? 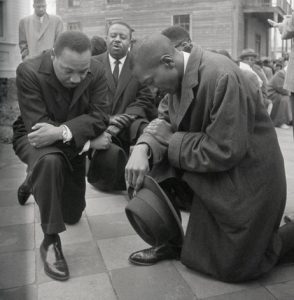 In this spring-becoming summer of 2020 that feels far more like a foreboding winter of discontent, it is difficult to see the moral universe bending toward justice in anything resembling a steady fashion. Certainly it didn’t for George Floyd, nor for any of the other casualties mentioned above.

And as we behold a nation already rent asunder and reeling from a toxic brew of extreme partisanship, raging economic inequalities and a pandemic that begs for calming, stable leadership, we are instead “led” by an unbalanced narcissist with the emotional makeup of an overbearingly petulant child. And this child-man wouldn’t dare dream of letting an opportunity for divisive demagoguery go to waste.

It’s hard to imagine things not getting worse from here. I personally have the same sense of deep foreboding that marked the most turbulent portions of the 1960s, the inner cities ablaze, righteous rage at injustice and oppression boiling over, there joined with opportunists of anarchy whose mindless destructiveness so tragically distracts from the legitimate grievances of protesters.

Richard Nixon capitalized on that anarchy to win two presidential elections. He did so by firing up his still-dependable base of fearful whites, some of them racists, others merely cowering in the fear whipped up by media imagery and a darkly artful campaign strategy suggesting Nixon was all that lay between “law and order” and chaos.

Still, Nixon was a mere piker, a milquetoast Protestant still capable of shame and thus constrained, compared to the twisted human being who sits in the Oval Office now, his Twitter finger ever at the ready to savage opponents wherever he finds them. (Given how fundamental they are to his self-identity, opponents are inexhaustible; he would create them out of whole cloth if they did not conveniently appear.)

Far from doing anything to quell the nation’s distemper, President Trump would much rather foment it, sowing additional chaos wherever he can, ratcheting up his rhetoric to prove his tough-guy bona fides and appealing none too subtly to his blindly devoted base who happily follow him into any abyss he chooses to enter.

The potential ramifications of this as summer and the runup to the election come are momentous and terrifying. A half-century ago, self-styled survivalists and gun zealots mostly had handguns and hunting rifles at their disposal to assert the self-defense they deemed necessary if rioters descended on their homes. In comparison, such “patriots” today are armed to the proverbial teeth, all manner of military grade weaponry close at hand, which they are free in many states to tote along on their daily errand-running through town.

Does anyone doubt that President Trump, watching and raging at his Fox News-tuned television showing continued disturbances and property destruction in multiple American cities, Sean Hannity sneering and bellowing from the screen, will not be sorely tempted to succumb to the itch of his Twitter finger and suggest none too subtly that the assault-rifle-toting “good people” he is always extolling might give the beleaguered local police forces a little backup assistance?

Perhaps I am alarmist, but given that the president has so relentlessly blown past my expectations over the past several years on just how deeply he will sink into depravity, I fear what awaits us. This nation is a virtual tinderbox that he is sitting upon, and the man is besotted with rhetorical kerosene and matches.

Or is it possible some figures as yet unknown, grasping fully what is at stake, will yet emerge to kneel in all solemnity, the moment ripe for hoisting the world on their shoulders and setting it peacefully down, doing “what people do when words fail.”?

One can only hope, as Dr. King never relented in urging us to do.

We can add Minnesota to this list, but truly, it is an entire nation’s illness, “all in it together…”

7 comments to Taking a Knee