That “Hope” Stuff: Inside Llewyn Davis and the Boston Bombing Survivors 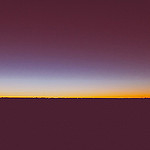 Few filmmakers convey the desolation of the physical landscape and its various reflections in the human heart as well as the Coen brothers. Their current film, Inside Llewyn Davis, takes this desolation to new (and cold!) heights in its portrayal of a marginalized, barely surviving folk singer wandering the unforgiving winter streets of Greenwich Village and Chicago in the early ’60s. Davis is homeless, which requires him to spend inordinate amounts of energy searching for a couch where he and his guitar can flop for a not-overly-imposing night or two while he awaits some kind of break or affirmation that his hope of making it in the music world isn’t completely misguided.

Among his many problems, though, is that even hope itself seems to have been beaten down in him by the time the film picks him up as a sad-eyed, occasionally mendacious soloist, pushing into his 30s with nary an asset nor credential to his name. His resume includes kicking around coffeehouses with one poorly selling solo album, and an equally obscure previous stint with a partner who threw himself off the George Washington Bridge as his own expression of the Coen brothers’ famous ennui.

What we don’t know is whether Davis ever possessed the kind of fierce idealism and native joy in his work that all artists require to see them through the troughs that threaten to swallow whole every last one of their aspirations. Clearly, if that spark ever existed, it is all but gone, so what we see on screen is a curious mix of stubbornness bathed in resignation.

Whether Davis ever catches a break, or summons the vigor to continue his musical odyssey regardless of continual rejection, or adapts his ambitions in order to create a satisfying, financially sustaining life in some offshoot career, remains unanswered at film’s end. But the signs are not good. 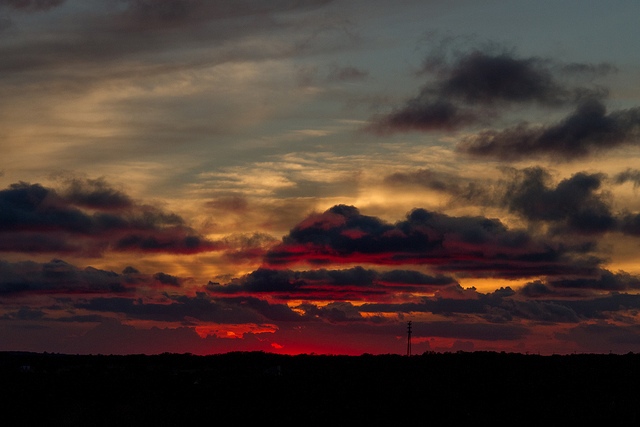 Which brings us to a People magazine story I have kept in a conspicuous place since coming across it last summer in an airport. The cover shows three attractive 30s-ish women, two on crutches with jeans that reveal missing left legs. They flank a third woman in the middle, taller, with her arms around the other two, wearing a knee brace on her left leg from which there protrudes an artificial prosthesis. All three are also wearing bright smiles, fresh-faced in a quintessentially American Girl portrait of vigor and goodness. The headline reads:

And what I am thinking now is: How is it that Llewyn Davis and these women even inhabit the same planet?

Yes, Llewyn is a movie character, but we all know real people who embody his traits of never quite getting on top of his own life, drifting haplessly in a sea of vague discontent and executive function deficit.

What People magazine and the Coen brothers present us with is competing narratives for the true plight and tasks of the human soul.

Are we ultimately masters of our fate by virtue of our graceful comportment and response to whatever slings and arrows life sends our way? Or is the best we can do to hunker when we have to, lash out when cornered, or at the very least, stop caring enough one way or another to even bother lifting our eyes while bemoaning where the fates have led us?

You likely won’t find those words when scouring Coen brothers scripts. The territory they explore is a bemused, distanced observation of the often senseless happenstance that sends human lives spinning in odd directions, from which protagonists respond by either lashing out in violence or retreating slump-shouldered into the shadows of cities and sprawling country landscapes. This is the brothers’ own art, which they explore as do few others.

Meanwhile, Llewin Davis offends his kindly hosts at a dinner party he barges in on, and shouts down another act at the folkie nightclub where he occasionally plays for a pittance and tips, his disdain for all that they are—and all he fears he has become—now palpable, unvarnished, and cruel.

At some point, all of us lose a leg or its equivalent. Someone dear to us dies, we get an intractable illness, a love stomps on our tender heart, our career dream is dashed with a spate of bad timing or an evil boss or perhaps most painful of all: plainly insufficient talent that we can no longer deny. (“I wanted to be a doctor, but I just couldn’t hack the chemistry” is a benign version of this oft-told tale.)

The People story subjects know what: “I choose to focus on the positive,” says one. “I’m happy to be alive.”

Another: “There’s no point in negativity. You just have to look forward and do the best you can.”

And another, a professional ballroom dancer: “I will dance again…On a normal day we practice for about two and a half hours every morning. I miss that so much.”

Meanwhile, Llewin Davis offends his kindly hosts at a dinner party he barges in on, and shouts down another act at the folkie nightclub where he occasionally plays for a pittance and tips, his disdain for all that they are—and all he fears he has become—now palpable, unvarnished, and cruel.

In the Coen brothers’ world, lost souls bump up against other lost souls, each of them autistic to varying degrees. They may all speak English, but that does not ensure a common language. In some cases, as with a taciturn James Dean-like driver who transports Davis and a drug addicted jazzman (played memorably by John Goodman) through a deathly dark and snow-bound midwestern night, their language rises barely above the guttural.

No language, no relationship. It is more than the temperature that is cold in the Coens’ wintry world. 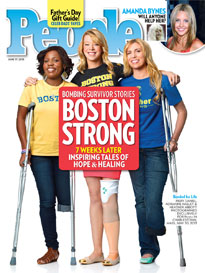 Staring long at the People cover, I found myself wondering about the dark days and thoughts its subjects had to have experienced. Moved by some inner resistance and refusal to be bowed, and with not inconsiderable help from makeup and hair stylists and lighting technicians (and likely some photoshopping from graphic artists), they look quite fetching as they stare back at us, barely 40 days removed from being flung onto the concrete, lying with ghastly wounds as blood pooled around them and sirens blared and they no doubt pined for their loved ones.

The sheer pain, the shock, the bandages, the ointments, the sutures, the scabs, the hellish sweaty rehab and gritting of teeth, every single part of their existence now at least physically different and requiring major adjustment in their everyday lives. It could not have been easy, nor given to breezy sloganeering or denial.

“I choose to focus on the positive.”

“There’s no point in negativity.”

“I will dance again.”

Up from those hospital beds, putting one foot in front of the other, that cliche pure metaphor now as they go about their one-footed lives.  In their world, this is simply what one does.

I don’t see any of them cottoning much to Llewyn Davis, nor vice versa. Do you?
***

A New Year’s shout-out and thanks to all, including the photographers:

7 comments to That “Hope” Stuff: Inside Llewyn Davis and the Boston Bombing Survivors