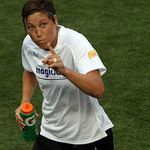 In any case, of all the narrative threads weaving their way through the World Cup match, which earned the highest television viewership ratings of any soccer match in history, men or women, the Wambach-desperate-for-a-World-Cup win seemed to dominate media coverage in the days prior to the game, and it figured prominently in the post-game reports of the U.S.’s surprisingly easy 5-2 win.

Get a writer for the paper, or an MC in front of a crowd, or a favorite uncle at the dinner table weaving a story about human beings that is laden with color and drama, foible and triumph, and you will get people reading and hanging on every word.

And though I felt for Abby and understood the sense of incompleteness to her career that lacking a World Cup win would represent, I could not help but marvel through about every last column inch devoted to the “Abby’s Anguish” thread: Talk about a profoundly First World problem.

Somehow, I had the sense that if her team lost the World Cup, Abby would manage to soldier on with her life and maybe even find happiness and contentment despite the hole in her resume. That her obituaries 50 or 60 years hence would not lead with, “Abby Wambach, whose life went into a downward spiral of drugs, decrepitude and perpetual mourning after failing to win a World Cup in her otherwise storied career…”

Yet to attend to media coverage of this thread made it feel like one of the more important things in the world, in what was surely the most important event in the world last Sunday, at least. My paper the next day ran two major accounts of the game as lead stories on the front page, and another two in the sports section, one of them a 70-inch piece headlined, “Celebration no less sweet for decorated role player,” with the subhead: “Soccer’s all-time scorer finally gets to lift the only major trophy that had eluded her.”

And we can all exhale now. 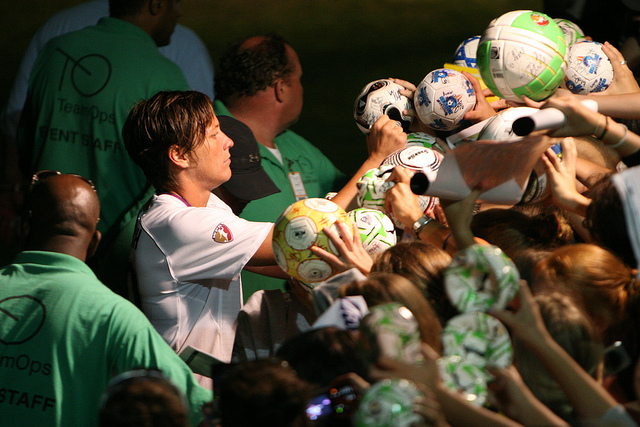 Please pardon the cheeky tone here: it’s part of my own grappling with the contradiction of maintaining a lifelong passion for sports as both participant and fan while also harboring the profound sense that sports is absurdly overhyped and of no real consequence whatsoever in the real world of political and personal upheaval, tragedy, illness and death.

Except when it is.

I look at sports as more or less controlled folly, joyous social occasion, and a stand-in for religion, it bringing together as it does throngs of humanity filled with passion, devotion and good cheer in a common cause that transcends the self. But here’s the difference between sports and real life:

I cheer lustily and care passionately about the outcome of games involving my favorite teams. But as soon as the final buzzer sounds and I ring out with either a “Yahoooo!” or a “Damn!”, I forget about it—immediately, as the inconsequential trifle that it is, compared to say, my relationships, or the terrorist act du jour, or the drought affecting the West.

But while I’m attending to the sporting event and communing with others of like mind, I am all over “Abby’s Anguish” and all the other narrative threads with which media makers whip up interest in the otherwise ridiculous spectacle of adults playing children’s games for fun and national pride and huge profit.

This tells us again about the centrality, the fundamental importance, of a good story in human life. Doesn’t matter which event or what the occasion: get a writer for the paper, or an MC in front of a crowd, or a favorite uncle at the dinner table weaving a story about human beings that is laden with color and drama, foible and triumph, and you will get people reading and hanging on every word, anxious to see how the tale proceeds and where it ends.

Where might Grandpa proceed from there? Oh, I know:

“Back a few years before she won the World Cup, Abby ‘came out’ as gay. This was a very big deal at the time…”

“Abby Is Gay,” we might call this thread. That was quite a narrative too, in its time. Couldn’t help noticing, though, that I didn’t see one mention of it in the thousands of column inches and microphone hours devoted to this year’s World Cup.

Holy crap, we really are making progress in this world, aren’t we?

This video, my friends, is a piece of work…

2 comments to The Abby Wambach Narratives