The Fall of the Mighty: Paying Homage to History At Budapest’s Memento Park 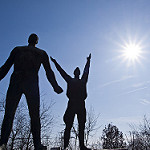 All nations build monuments to their past, and almost since the beginning of recorded history, they have done so in the form of statues to heroic figures, set in or near town squares or much-traveled byways. And there the stone or marble monuments live, weathering nicely to a ripe lasting maturity, touchstones to national glory and its people’s best qualities.

But what about when the heroes so depicted have been part of an authoritarian regime, perhaps even a foreign occupier that rules its people with a barbed lethal fist, only to eventually be overthrown and driven from power? What happens to larger-than-life monuments then?

Many countries have faced this question. The Iraqi people answered it in 2003 when, with considerable help and encouragement from U.S. soldiers and tanks, a small contingent of them toppled a statue of the hated despot Saddam Hussein in Baghdad’s Al-Firdos Square. Then they took to him with a sledgehammer to complete the destruction.

It was as good as they could do at the time to derive some sense of vengeful, cathartic satisfaction, Saddam having fled for the time being, whereabouts unknown.

Eight months later, he was found rumpled and dirty in a hole in the ground, lending a kind of delicious symmetry and mirror image of his noble statue formerly rising to the heavens. 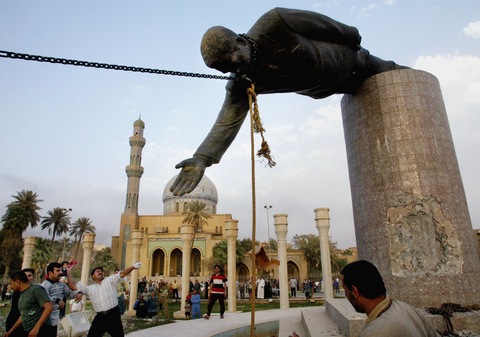 As the democratization movement spread across Europe in the late 1980s, Hungary was among the first of the Soviet Union’s client states to transition peacefully to democracy and free elections. It did so a month before the Berlin Wall came down in about as improbable and astounding a historic event as anyone would have dared to hope for. (Here was an actual positive occurrence of the misbegotten, misapplied “domino theory” that had led the United States into the quagmire of the Vietnam War.)

Hungary had come under Soviet domination in a kind of internal coup in 1949 and was even more ruthlessly brought under its boot after a failed and bloody 1956 attempt at revolution.

So in 1989, among the many questions the newly elected government needed to answer was: What to do with the scores of Soviet-installed monuments to the likes of Marx, Engels, Lenin, and a number of now reviled Hungarian leaders who had conspired with the Soviets to subjugate their own people?

Let jubilant crowds bring their sledgehammers to the town squares in an intoxicating, national bacchanal?

Bury them deep into the earth, dead remnants of an abhorrent past?

The Hungarians decided to take a different tack. 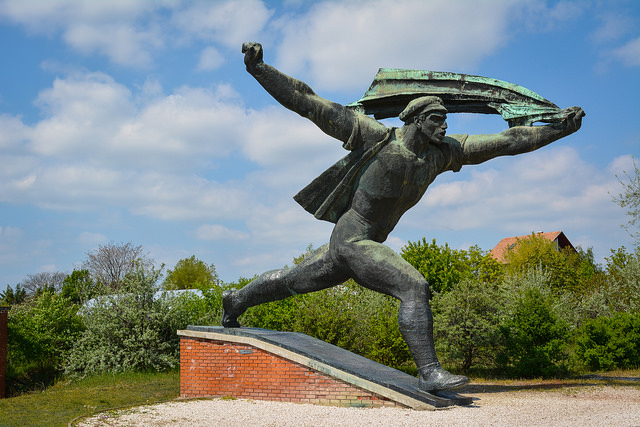 Memento Park (also called “Memorial Park” in various tourist references) lies on the outskirts of downtown Budapest, a few kilometers from where Russian tanks had made rubble from sizable portions of the city in crushing the 1956 revolution. It’s an odd and arresting site, to where some 40 statues were transported from various venues in the early 1990s, there to ultimately stand next to each other in an expansive open air setting when the park opened in 1993.

But rather than an aggregated monument to heroes, the park stands as a haunting but useful reminder of what can happen to countries and people beset by struggles for power and dominance that are as old as humankind. Its architect, Ákos Eleőd, framed it this way:

“These statues are a part of the history of Hungary. Dictatorships chip away at and plaster over their past in order to get rid of all memories of previous ages. Democracy is the only regime that is prepared to accept that our past with all the dead ends is still ours; we should get to know it, analyze it and think about it!…This park is not about the statues or the sculptors, but a critique of the ideology that used these statues as symbols of authority.” 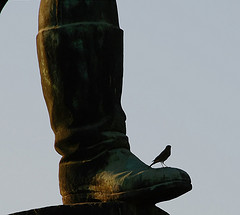 So: history, to borrow the current popular parlance, “is what it is.” However dark and tangled our past, whether it be the broad sweep of our nation’s history or the personal history we have lived in the habitation of our own bodies and beings, the answer is not to sledgehammer it into unrecognizable shards and bury it under the dirt. Instead, we bring it to the light of day, walking amidst its themes and prevailing currents, taking from them valuable lessons of who we have been, what we have endured, and what we may yet become.

“Because it can be talked about, described…”

Is there a more potent rationale for the absolute need of humanity for openness and transparency, for reckoning fearlessly with one’s demons, than that?

Sure, smashing them to the proverbial smithereens can provide momentary relief from rage and resentment, fear and loathing. And just trying to “forget and move on” can also work for a time. But those are mere band-aids on deep piercing wounds, whether of nations or their people.

Because unless one proceeds from smashing and “forgetting” full on into dementia, the hounds of history tend to creep back up on us, usually in twisted shapes, memory having its way to remind us we are the sum total of all our experiences, each one of them to be surveyed, “honored,” or at least accepted in their own ambiguous way, hauled out to a fresh location where they can stand as beacons of what we want and don’t want, ways to be and not to be.

Wandering through the monuments of our past, taking the full measure of our history, we integrate rather than discard its varied remnants, giving them sunshine and attention, out of which new monuments may suggest themselves, in new, more hopefully themed parks of the future.

Singer/songwriter John Gorka, with another take altogether on the subject of monuments…

If you’re on Facebook, I invite you to visit this blog’s public page there for daily snippets of wisdom and other musings from the world’s great thinkers and artists, accompanied always by lovely photography. http://www.facebook.com/TraversingBlog

Bird on boot photo by Patrick Down, Edinburgh, UK, some rights reserved under Creative Commons licensing, see more at: https://www.flickr.com/photos/patrickdown/

8 comments to The Fall of the Mighty: Paying Homage to History At Budapest’s Memento Park