The Human Connection: “Her” and “Twenty Feet From Stardom” 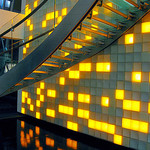 A slew of almost electrically talented backup singers grappling with never quite breaking the stardom barrier and a lonely man with his new girlfriend-the-operating system filled up a dreary weather Saturday last weekend, reminiscent of the “double bill” presentations that were de rigueur in the movie houses of my boyhood.

Oh, what a filmy weekend it was.

Synopses of the movies in question: Twenty Feet From Stardom and Her, can be gleaned from the trailers below, so what will concern us here is but one thread that works its way through both films, dominantly in Her and as an interesting side story in Twenty Feet.

Boiled down to its essence, the issue is: Are other people all that necessary?

Late in Twenty Feet, one of the fabulous, magnetic backup singers the film so lovingly depicts is reflecting that at some point in recent years “the phone stopped ringing” as much as it used to. She consults her homeys and discovers it’s not only her—there just isn’t the demand for backups that there used to be.

Among the suspected culprits: Cost-cutting on colossally expensive and extravagant tours, with artists employing fewer backup singers and instead relying on synthesizers and multi-track recording that allows just one backup—and one paycheck—to do multiple duty.

Picture one singer in a sound room, headphones on, listening to a recorded track of the lead singer (who is nowhere to be seen), to which she adds a “doo-wop-a-doo” in soprano on one track and then lays down a husky “shing-a-ling-a-ling” on another track.

Is that any way to make music?

Years ago, Natalie Cole employed the marvels of modern recording technology to sing several “duets” with her revered father Nat. It made for some lovely records that were awash in sentiment, particularly because her father had been dead for some 30 years. Later, she sang “with” him in concert, his voice piped in and his image filling a screen behind her.

While we can be glad for this as the “best available” means of experiencing a supremely talented father-daughter duo, there is a kind of shadow behind the whole enterprise as well. What would it really be like—both for them and for us—to have them up there together? How would their interactions, in the flesh, as breathing, moving, perspiring performers mixing together on a stage, change the music and the entire experience—for them and for us?

Every musical performer will tell you something mysterious happens when they gather with other musicians and go at it in real time. Call it the chemistry begat by musical “conversation,” but the interplay of live performance, every player pitching his or her unique ingredient into the pot, makes for a far tastier stew, compared to the canned fare of performers playing in isolation, with a sound mixer later putting it all together. The result of the latter might be affecting, but inert, too, like Nat King Cole was and remains, whatever the marvels of his “concert” with his daughter.

The meaning and necessity of human connection is even more directly and emphatically lifted up in Her. Ten or 20 years ago, the premise of a person falling in love and carrying on an erotically charged romance with a computer voice may have seemed outlandish but at least fun; today it is mostly alarming precisely because it doesn’t seem outlandish at all.

What we might bear in mind is that computers and robots have evolved so far beyond any conceivable science fiction we were able to foresee in the past that we should know better than to scorn or laugh away the possibility—no, make that certainty—that they will continue to exceed our most far-fetched and fearful visions.

A kind of joking set piece in the movie is the sight of legions of individuals walking the streets of Los Angeles totally immersed with their own phone-based paramours, just as the lead character, played by Joaquin Phoenix as the improbably named Theodore Twombly, is. How that sight differs from anything you can observe today on the streets of any city across the world—legions of individuals totally immersed with their own phone-based something-or-others—isn’t quite clear.

So is this where we’re headed—made-to-order friends and lovers programmed with such sophistication that they learn and evolve in response to our deepest needs for understanding, empathy and responsive communication? Who never have bad breath or a bad accident or an illness? Who chirp a bright and ready “Good morning!” the very second we log on seeking company or consolation or refuge from a bad dream—or the ongoing bad dream of an inert, disengaged life?

Rather than focus solely on the human character’s needs, Her posits a benign version of Frankenstein, a machine who breaks the bonds of its programming by humans and asserts its own will, its own needs. As the unembodied Samantha, Scarlett Johansson is about the most pleasant, come-hither machine entity imaginable. She experiences frustration, puzzlement, and flirty neediness, at one point arranging for a sex surrogate to engage Theodore and then programming herself to experience the sights and sounds of carnality. (The session ends abruptly in a case of too-much-weirdness for him, but Samantha’s motivation was rather poignant.)

What we might bear in mind is that computers and robots have evolved so far beyond any conceivable science fiction we were able to foresee in the past that we should know better than to scorn or laugh away the possibility—no, make that certainty—that they will continue to exceed our most far-fetched and fearful visions.

What if and why wouldn’t they be able to be programmed to “learn” from their interactions with us, and be able to delve so far into our lives and histories and genetic profiles that they can not only respond but anticipate every need and nuance of our beleaguered psyches, with billions of data bits reflected back to us in perfectly pitched fashion in a nanosecond. (“35,100,100,000 results for your unstated need for me to respond with ‘There, there, tomorrow’s another day,’ 0.16 seconds.”)

It’s easy to dismiss the idea of a computer romance and proclaim our everlasting fidelity to real humans and real human connections, flawed and mortal though they are. It’s reminiscent of the scorn commonly expressed for plastic surgery and its desire for eternal youth, if not eternal life itself. But what about plastic surgery after disfigurement, or to correct a cleft palate?

By the same token, what about computer romance for the socially inept, the terminally lonely, the aged and widowed and abandoned, the physically and even emotionally disfigured?

How often do we hear from writers or other creative types: “I was a terribly lonely child; books (or painting or movies or a fantasy friend) were my salvation, they made my life bearable.”? Life and relationships hit speed bumps and grow difficult for even the most accomplished social beings, causing them to seek refuge in the dark, under a blanket, with a tall glass full of an emotional elixir/pain blunter.

What if those balms could be accompanied or replaced by a robot crafted in the future to look every bit as fetching and flexible as Scarlett Johannson (or her male equivalent), combined with the soothing hands of your favorite massage therapist and the brain of Susan Sontag? Would there be a market for such an entity?

I’d bet my library on it, without a shred of hesitation.

To some degree or other, we at least start out in relationships wanting to mold the perfect partner, whom we seek to influence to fulfill our every need just as we pledge to do our utmost to fulfill theirs. After the honeymoon period when we are convinced, by golly, that they will do just that, they develop the annoying habit of being and becoming ever more themselves, which is when relationships enter the conflicting, negotiating, accommodating, accepting—which is to say, “adult”—stage.

But what if Samantha becomes reality, the ultimate marketplace partner with whom we can avoid the arduous negotiating stage because she really does have no needs of her own other than to fulfill ours? (Our greatest need being, at the most primal infantile stage, to have all our needs fulfilled…)

Is this where Her ultimately winds up—humans regressing to infantile needs fulfillment, the teat, whether physical or emotional, available on demand, like our favorite movies now available 24/7/365 on cable?

Or alternatively, if we desire, we get Samantha programmed in even more sophisticated fashion to have her own needs, her own personhood, a private sense of self, one that will frustrate us and force us to compromise and accept the less than perfect?

In other words, to act like a real human being.

Now there is some sophisticated programming. I’d love to talk to the one who wrote that code! Might anyone have his or her contact info?
***

Appreciation to the photographers:

Stairs photo near top of page courtesy of Sanctu, see more at: http://www.flickr.com/photos/mithril/

2 comments to The Human Connection: “Her” and “Twenty Feet From Stardom”