The Lizard, the Crows, the Soldier…and Me 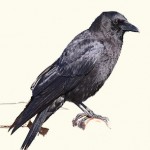 Returning from a run at the school track around the corner, I behold a small gathering of crows in the middle of the street, all of them looking down, as they tend to do, with their uncanny radar for discerning food in the urban wilderness. The object of their attention looks to be a small tree branch at first, but I can’t fathom why that would occupy them so concertedly, so curiosity bids me to intrude upon their circle. Where I come across an obviously besieged alligator lizard, its mouth agape in an “I will bite and swallow you all!” bluff that had been effective enough to keep the gathered crows dancing gingerly in the moments before my arrival. The crows squawk in retreating to the surrounding trees and telephone wires, wary eyes cast upon me, their sudden competition for a protein snack.

One lone lizard, maybe an inch high and a few inches long, already missing its tail, against probably five crows with sharp beaks, surrounding and towering above it in the late afternoon sun. A situation tailor-made for anthropomorphizing, nature-intruding, self-lionizing human beings, riding to the rescue of the defenseless at every turn. All I am missing is my mask and cape, but there is no time for those anyway, so I set to work keeping this innocent lizard from the grasp of the marauding crows.

I do momentarily consider simply walking on and allowing this exceedingly common scene of nature to take its appointed course. But discerning exactly what “natural” is in this context can be a challenge. Am I completely outside it, looking in? Or just another dramatis personae, entitled to my self-appointed role? Is the bathtub-become-dungeon that the spider slips into overnight a “natural” place for it to meet its end, or am I justified in taking a few moments to find a jar, carefully maneuver it inside, then carry it out to the yard so it can live a while longer amidst the grass and rocks, devouring other live creatures until it is eaten in its turn?

Oh, Mr. Darwin, help us in our struggle. 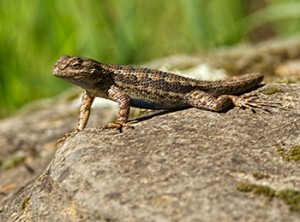 Compounding the “What is the natural course of action?” question in the very next moment is a car come around the corner, bearing down on my lizard and me. I hand-signal, pointing downwards; the driver obligingly stops. Turns out it’s a neighbor from a few blocks away—our daughters had socialized for a spell in the long-ago. An ex-soldier with a couple of Afghan tours under his belt, has encountered his share of lizards. We consult while the lizard stays in place and the crows continue to watch and squawk from above.

After we make an impromptu, almost wordless decision to join forces and scooch the lizard out of the street, it makes a beeline for the soldier’s wheel well, from where it stubbornly refuses to be prodded. Perfectly logical, I realize—it would be the safest possible place I would think to retreat to, if I were a lizard and in the habit of such thinking as they do.

So here we are, my soldier-neighbor and I, on our hands and knees on the asphalt, reaching under, around and into the grooves in his rear wheel for a suitable angle from which to poke the lizard onwards to what we deem a safer destination in the nearest front yard, away from the crows and passing cars, to whatever temporary shelter and safety we can afford him in his duress. He resists mightily, thrusting that gaping mouth at us with every poke.

“He’ll bite and tear right into you,” the soldier warns me. “I was wondering,” I reply.

It takes another minute or two for us to dislodge the lizard and for the soldier to quickly figure a way to lay a tiny fallen branch over its head, thus allowing him to grab it by the neck without being bitten. He then hand-carries it to the neighboring front yard, where he drops it gently and considers the task done.

The soldier and I then say our head-shaking, half-smiling, So-exactly-what-the-hell-just-happened? good-byes, whereupon he drives off and I espy one last crow who hadn’t grown weary and disinterested, still on the telephone wire above, observing the scene. 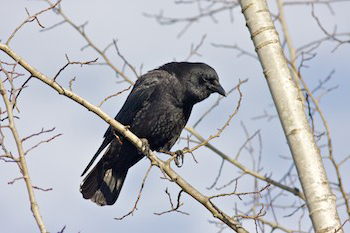 As I take a step away toward my house where dinner now awaits, the crow fidgets, already prepping a flight to the ground. I glance back and observe the lizard still exactly where the soldier and I left it, perhaps in shock, open and exposed. I step back toward the scene; the crow halts its flight preparation. I then grab a longish wood chip, try to maneuver the lizard away, away, into thick brush around the tree and house. Nothing doing.  The crow peers intently.

Finally, I espy a sheet of paper, a wayward math assignment blown over from school across the street. I lay it on top of the lizard and tuck it loosely under some grass strands so it doesn’t immediately blow away in the light evening breeze. I find myself wondering whether the crow has watched this and discerned my intent. Are they that smart? I ask myself. I guess I’ll find out, I answer.

I also wonder whether the lizard is dying, whether that was why the crows found it and were beginning to have their way with it in the first place. Dust to dust, via the gullets of all those prepared to feed on us. Was it simply the lizard’s time?

Whatever. It is now my time to get home, my “work” here, dubious though it may have been, done. By the time I reach the other side of the street, the remaining vigilant crow is on the asphalt where the lizard had been, but it then quickly heads to the sidewalk, doing that familiar sideways strut and casting its eyes to and fro, searching. I can’t help but stay just a few moments more to see if I can discern the outcome.

So I watch from a distance as the crow does a methodical sweep of the immediate area, up and down the sidewalk, back into the street, to the sidewalk again, no lizard appearing before it. I realize it hadn’t actually seen or processed where we placed the lizard, nor the paper I’d placed on top of it. The lizard just might be safe, I think—if it has survived at all.

After dinner, it is still slightly this side of daylight, and I consider returning to the scene, to see if the paper is still there, and if so, whether the lizard is underneath it, now become a corpse.

But I think the better of it.

Go on, check out this blog’s public page on Facebook for daily, 1-minute snippets of wisdom and other musings from the world’s great thinkers and artists, accompanied always by lovely photography. http://www.facebook.com/TraversingBlog

Crow and lizard photos courtesy of Loren Webster, a Puget Sound-based birder, photographer, and blogger whose extraordinary close-ups of various shorebirds are regularly on display at:
http://www.lorenwebster.net/In_a_Dark_Time. All rights reserved. Contact: loren@lorenwebster.net

A number of amateur videographers on You Tube have captured variations on the crow vs. lizard scenario described above. This one below has a happy ending (at least for the lizard).

3 comments to The Lizard, the Crows, the Soldier…and Me