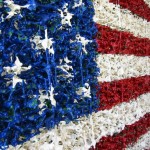 In his 2005 work, “Memorial Flag (Toy Soldiers),” Providence, Rhode Island-based Dave Cole (born 1975) gives expression to just the kind of moral conundrums all great political art points to. Sometimes, such art adopts a powerful point of view towards the conundrum (think of Picasso’s fiercely anti-war “Guernica”), while other times it rests with merely noting a deeply troubling question or perspective while allowing viewers to grapple with it as they will.

Cole created what he considers an actual flag rather than an artistic representation by melting together and then painting 18,000 toy soldiers armed with their guns, the soldiers of the type that most every American boy learned to play and fantasize with growing up in the 20th century. (Collecting soldiers and playing “army” was a reliable alternative to honing one’s baseball card collection and playing backyard fantasy ball.)

Cole even checked with the Government Printing Office to ensure that his flag matches exact specifications for official flags (9.5 feet by 5 feet, in case you were wondering).

The varying shapes of the soldiers in different positions and holding different weapons gives the work its rough-hewn, notable texture when seen from a distance. The whole piece looks like a flag and nothing more, though.

It is only when viewers approach closer that the painting reveals itself en toto. “Oh!” one almost involuntarily exclaims. It’s not just a flag.

It turns out there’s no piece of the work that isn’t a toy soldier, adding up to a veritable army—melted, inert, encased in lifeless, mashed-together plastic. It’s a huge jumble of dead soldiers painted and arranged painstakingly in red, white and blue.

The inextricability of the flag from the countless soldiers who fight and die for some notion of it allows viewers to make their own associations with the subject at hand. There the soldiers are, fallen at odd angles, upside up, upside down, facing forward and backward.

What are you going to make of it? 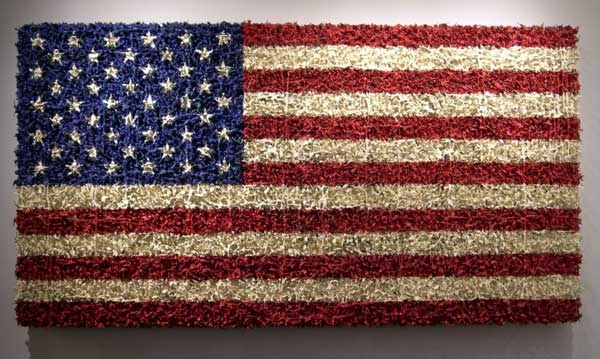 On one side are those struck with extreme revulsion at the senseless sacrifice demanded by war, one conflict after another in a nearly unbroken chain stretching thousands of years, war’s clearest commonality being that it invariably sees old men sending young men off to fight and die.

The cost of all those shattered lives and families stands as its own most powerful indictment against the ravages of war and the righteousness of peace-making.

But with its bright sheen of red, white and blue subtly harboring those who have sacrificed on its behalf, Cole’s work could easily fuel an upwelling of proud patriotic fervor in others. Those who are more poker and resigned to humanity’s war-making tendencies might gaze upon the soldiers from a closer distance and see the nobility and need for their sacrifice in a world still suffused with brutality and clear lines between good and evil. And now Cole has done those soldiers proud.

“Art is our chief means of breaking bread with the dead,” remarked American poet W.H. Auden in a New York Times column in 1971, in which he also claimed, “Nothing I ever wrote saved a single Jew from being gassed…it’s perfectly all right to be an engagé writer as long as you don’t think you’re changing things.”

Rather too dour of a view, it would seem, given how efficiently, with a serious measure of clear-eyed, goal-directed activity, totalitarian regimes start rounding up writers and artists as soon as the tanks roll into a city, then dispersing them to the gulag where their expressiveness usually goes mute or muffled at the prison walls. I think it safe to say they would not do so if what artists do and say didn’t matter.

For our purposes here, we need only ask of Dave Cole and others of his artist tribe—including gifted and gifting writers such as Auden—that they make us stop to think, and ponder, and struggle to understand and respond to the moral dilemmas and unresolved questions that life continues to throw in front of us.

Auden’s fierce anti-totalitarian screed “The Shield of Achilles” is not for the faint of heart, but the effect of his own reading here is almost hypnotic, though as dark as the darkest bottom of the drink you may well want to lift up to your lips upon reading it. Worth it, though? Yes…

On Facebook? Check out this blog’s public page there for daily snippets of wisdom and other musings from the world’s great thinkers and artists, accompanied by same quality photography you see on these posts. http://www.facebook.com/TraversingBlog

Larger Cole flag art photo at middle of page from past exhibition at Cincinnati Museum of Art, see more at: http://www.cincinnatiartmuseum.org

4 comments to The “Memorial Flag” Art of Dave Cole