To Be Young and of Fighting Age: Two Takes on the Vietnam Era 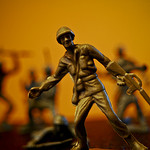 As a worship associate in my church, I periodically help produce services, assisting the presiding minister by doing readings and planning various other activities that help shape what takes place in the sanctuary every Sunday. In our congregation, it also involves presenting a personal reflection that is tied to the topic of the service.

At yesterday’s Veteran’s Day service, I reflected on my own experience of grappling with the Selective Service System draft as I came of age in the late 1960s, just in time for the Vietnam era. After I got home, I sent the text to my longtime friend (40 years and counting) Kevin Feldman (nickname “Gar”) with a brief note that said:

Does any of this overlap with your experience, or did you 2S all the way and then lottery out of the draft?

What Kevin wrote me back struck me as such a stirring perspective on the times—different and in many ways far more intense than my own; he is three years older than me—that I thought it a worthy glimpse into a crucial part of our nation’s recent history, and perhaps of more than passing interest to my readers. Please bear in mind it was an off-the-top-of-his-head email rather than a refined and edited essay, which gives it, in my view, a fierce urgency I wanted to maintain (slightly salty language and all…).

As you’ll see, I hadn’t specified who wrote the piece (I assumed he would know), which also lends a sense of flat-out realness to his response.

So herein is the full text of my reflection, followed by Kevin’s email back.

There was no doubt we would all be real soldiers someday, in whatever war awaited our generation. It was just the way of things.

That awful but nobly purposed war, World War II, was still fresh in the air when I grew up. The newsreels of that evil Hitler and the terrible Japanese bombers decimating Pearl Harbor were all over television and the movie intermissions. (This was in ancient times, when double features were standard fare.)

John Wayne was taking care of them all, though, and the stars and stripes always managed to reign supreme, flapping in the breeze.

For young boys, this saturation in heroism and the vanquishing of evil suffused our play. It was aided and abetted greatly by the toy manufacturers, who churned out millions of those little green army men we bought at the dime store and collected like we did baseball cards.

We grew our army and their munitions into entire regiments to the degree that our military budgets allowed.

We’d spend hours setting up our men to do battle in our backyards. Or even better, in vacant lots where there was plenty of brush to hide in, or small rises with rock formations where we could hold the high ground and seek cover from enemy fire. (To this day, I can’t walk past a vacant lot without gauging its usefulness as a mock battlefield.)

There was no doubt we would all be real soldiers someday, in whatever war awaited our generation. It was just the way of things. 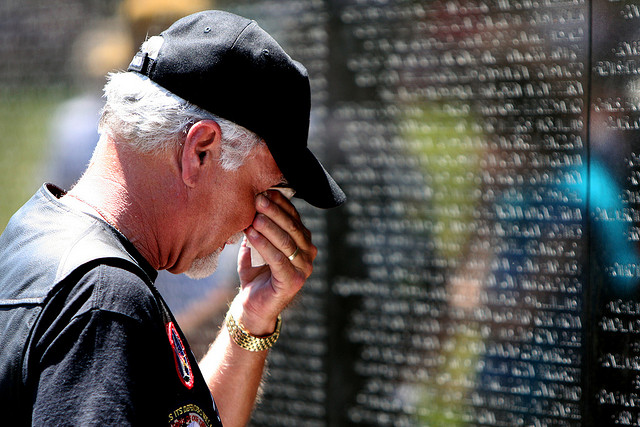 Well, that was the early 1960s, and the next war turned out to be Vietnam. By the time I came of draft age in 1969, the war was escalating daily. Guys I knew who didn’t get 2S student deferments like my buddies and I did were shipping out.

I didn’t quite know what to make of the war. My preoccupations at the time were basketball, girls, and planning a college education. But the feel in the air about it was not good.

No monster Hitler we had to stop.

No Pearl Harbor bombing to avenge.

It was only Nixon and Kissinger talking about Communists and dominos. And references to bombing North Vietnam back to the Stone Age.

Meanwhile, demonstrating your basic post-adolescent cluelessness, I had neglected to renew my student deferment and was reclassified 1A, ready to be drafted. I was immediately called for my physical, a mass cattle call in downtown Los Angeles of which I will spare you the humiliating details.

The general protocol at the time, with accelerating call-ups to feed the astonishing number of 2.6 million American soldiers who were eventually deployed to Vietnam, was for draft notices to follow a physical within mere weeks.

In that time, I rushed to overcome my paperwork slovenliness and refile for my student deferment. But there was an open question of whether my draft notice would arrive first, in which case I would have to report for duty.

Was I nervous? Oh yes, I was nervous. By then, the war was a disaster and young men were dying by the bushel for no good cause. Many were instead fleeing across the border to Canada, which was accepting American draft resisters.

But the U.S. made it clear if you did that, you could never return without facing prosecution.

At the time, I considered Canada amidst the whirl of other options fueled by fear and antipathy to the debacle of Vietnam. I doubted I could go through with it though, given the prospect of never seeing my family again.

My muddle was resolved when my student deferment arrived in the mail one day, to which I breathed a huge sigh of relief.

Later that year, the government ended all student deferments and instituted the draft lottery. My birthday came up as No. 169, and they drafted only through No. 150 that year. That meant I was free from military duty forever— based on numbers picked randomly out of a barrel.

A perfect metaphor, it seems, for the arbitrary roulette wheel that affects so much of life and death.

But from those days forward, I never lost sight of the awful waste and carnage visited upon young men—and now young women—who weren’t as fortunate as I was.

Barely beginning their lives, they were cut down by the machinations of old men living out their fears and dreams of dominance, far from backyards and vacant lots where young boys once played out their own dreams of simple duty and heroism.

For me—I can relate to the overall vibe of this piece, but a number of my particulars were very different. I was in college taking LSD, smoking pot, reading Alan Watts and Ramparts, studying the Stoics and such, listening to Dylan, Beatles etc., and it was very clear to me this was a crazy deal that was not going to be my fate—whatever solution I would need to find. Can’t imagine not keeping my deferment current as this other writer tosses it off as a simple space-out. For me it was the hot breath of the Devil that was on all of our necks!! 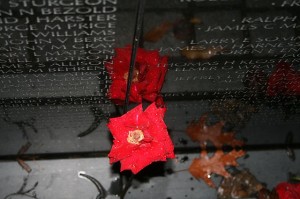 We were throwing marshmallows at our Dem. Senator, Henry “Scoop” Jackson as he defended the escalation in VM during a campus speech, so the urgency and the emotion was intense, the feeling that our country was fucking mad—”they” had already killed the Kennedys and King, were trying for Ali—and no freaking way was I going to be part of this.

The big showdown personally was when my parents had an in for me with the National Guard (in those days, a sure way out, unlike today), but I had to search deep and realize I could not support the war effort in any way—tacit or otherwise—without compromising who I was learning I was… (Plus some fear and self-preservation thrown in no doubt). But I so clearly remember having this out with my folks (esp. Mom) at home for Xmas Jr yr (1968-9?), and realizing Canada or jail but no way the War Machine…

As it turned out, I was able to get my advisor, a psych prof and avid war resister/campus leader, to help me cobble together a psychologically unfit (gay etc.) profile for my physical in Seattle, spring 1970. It was right out of Alice’s Restaurant —the Sgt. running the show at the induction center proudly told us they wanted out as badly as we did not want in, but to do our “thing” during the psych end not the intellectual test, since we were all college seniors and auto-qualified…

A low mental score only meant you’d get the worst jobs in the Army….The whole scene was so surreal: after all the physical stuff you sat and waited to see the shrinks…my shrink did not even look up, this mousey looking little dude with a weird mobile hanging over his desk, big glasses and a bored-as hell-expression on his face. He just asked me a bunch of stock Qs, then looked over my  profile and said 4F (unfit). I wanted to kiss his ass…Walked home (from Pier 91, which was 10 miles or so from my house) and just reflected on the gift I’d been given…

It’s all a longer tale than this, but that’s the gist. It was a transformative, “Who am I? What really matters? Do I have to follow my parent’s lead?” etc. etc. scenario, very much a significant turning point in my young life, and one I am proud of to this day…though I didn’t have the cajones of those going to jail.

If if it came right down to it, would I have gone to Canada along with Jesse Winchester? Don’t know, but thank goodness for the anti-war movement on our campus that made it relatively easy to foil the war machine in its quest to chew me up for cannon fodder in “an old man’s nightmare,” as (friend) Lou Denti’s anti-war song in our band termed it!

Wow, haven’t thought about that for a while…where did you come across this?  Major reaction on my part for sure…I am just so thankful I was in college and able to encounter thoughtful antidotes to this crazy xenophobic shit that was driving our gov’t at the time…and to have had a peer group of support.

Oh, and reading Johnny Got His Gun (Dalton Trumbo) convinced me that this war deal was definitely not something I was going to participate in…How I would figure a way out was a 2-3 yr. journey, but the outcome was never in doubt, only the particular path I would eventually travel. 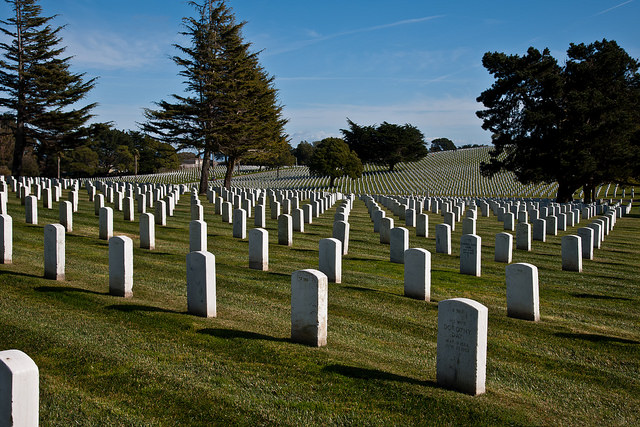 Interestingly, I did not have one close friend who was drafted—only a couple of high school pals who did not have access to the levers afforded by college and the chance to develop their individuated consciousness relative to such life-altering decisions…Much like our current volunteer army, most of the fighting and dying was done by less educated kids without the connections to get into the Guard (e.g. George W) or otherwise get their ass shot off for this crazy-ass delusion.

One of the things that bugs the shit out of me is how pols like Clinton don’t call out the war in VM for what it was…I think only Kerry of the big time pols of my generation had the balls to do this. No wonder the Dems fell in line for Bush and Iraq…

Enough already—sorry to ramble, but you did hit a nerve!

Last May, I wrote about John Gorka’s “Let Them In” and called it  “the best anti-war song ever.”
I believe this gem is a close second.

Photo of man at Vietnam War Memorial by Noahhhhhhh,  some rights reserved under Creative Commons licensing, see more at: https://www.flickr.com/photos/tunnelarmr/

4 comments to To Be Young and of Fighting Age: Two Takes on the Vietnam Era