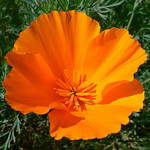 If I were inclined to believe in God as a helpful, sky-residing fellow lording it over us all from his perch in the heavens, I would present him with three words of challenge by which he might explain himself and his creation: fleas, mosquitos, and the (damn) weeds that repopulate my poppy patch with unremitting, increasing fecundity every year. Of the three, this last one is the matter that most occupies my thoughts every April, as spring and its weeds kick into high gear.

Let me be clear: I bow deeply to the wonder of the earth’s regeneration. The exultation, reverence and passions unleashed by spring? Count me among their staunchest friends. (If spring were on Facebook, I’d be posting like mad on its wall this time of year.)

But weeds? And the back-aching, muscle-tensing work required to clear them in order for another of God’s masterpieces—the perfectly developed California poppy—to pop unbidden through the soil and put smiles on the faces of my neighbors as they stroll by on these sunny April afternoons?

How could a compassionate God justify such a severe workload of weeding in order for us to behold his creation? Is it merely to balance the fact that we need do nothing at all to enjoy the freely begotten sunrise every morning? (With his right hand he giveth, and with his left…) 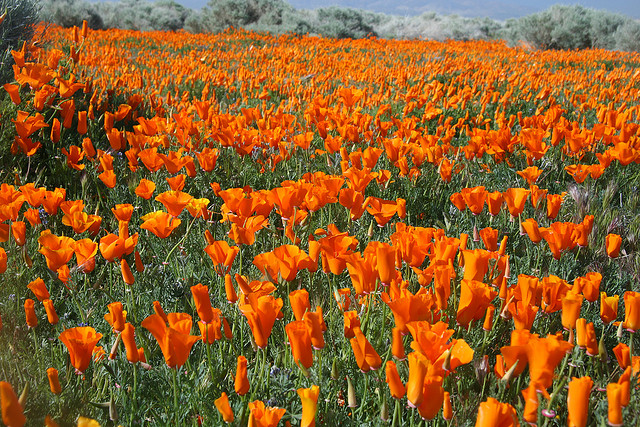 Weeds stimulate this kind of thinking as I stoop low in snatches of 30, 60, and, when I’m really willing to submit myself to God’s lash—90 minutes of careful digging, scooping, and pulling. One must wend with exceeding care through a patch that has burst forth through the winter rains with a ratio of probably 90 percent weeds to 10 percent nascent poppies. Not yet flowered, the poppy plants struggle to assert themselves amidst the battalions of domineering dandelions, winter wheat and weird clovers.

Often, weeds cleverly entangle themselves or share virtually the identical square millimeter of soil with a poppy, so that a barely misbegotten little dig with my tool or an even more painstaking pull with a combination of thumb and index finger results in an entire poppy being uprooted right along with the offending clover. (This is when I begin to reassess my casual disregard of Satan and his ways…)

Worse still is to have succeeded in such tender discrimination in one part of the patch only to elsewhere espy more entanglements, and in sallying forth to confront them, inadvertently crushing the previously liberated poppy plant underfoot. (Double damn!)

No, weeding is definitely not for the spiritually wobbly. It requires both resolution—Weeds bad, poppies good, I don’t care what the world’s religions say about the sanctity of all living things—and exquisite care that involves evaluation and discrimination in order to achieve the sacred object of desire.

In a gardener’s case, this object is an aesthetic model, a snapshot of the perfectly realized patch of earth to which we commit ourselves in order to midwife our vision into reality. 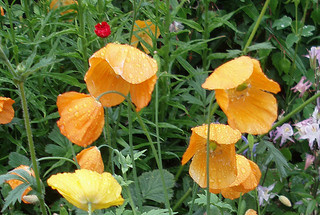 All gardening begins with a goal. Some vision has to compel us if we are to submit ourselves to the toil that elaboration of our vision requires. The vision can range from loosely configured (“Some poppies here, let’s allow a bunch of coleus to do its thing over there”) to highly regimented (“Plant six rows of tulips six inches apart, and six feet to the left of the northernmost row, another six rows of hyacinth”). Our world thrives on multiple interpretations and expressions of the Ideal Garden.

Truly, a garden is a canvas upon which our imaginations, our personalities, and our genetic/cultural/aesthetic/energetic endowments can take wing in godly elaboration. It is both intensely personal—“This is what I see and long to bring about, the work in which I hope to be well pleased”—and just as intensely social. Does anyone garden with the strict intention of keeping the creation out of sight, solely for one’s own enjoyment? I think not. (“These little poppies o’mine, I’m gonna let ’em shine…”)

“I look forward to your poppy patch every spring!” more than one passerby has sung out to me over the years, some of them longtime neighbors, others strangers heretofore unknown. (My wife garners similar compliments on her tulips across the yard.)

I’m not sure about the exact quantity of lower back pains or strained calf muscles I am willing to endure in order to reap such seemingly transient rewards as neighbors’ smiles despite eventually wilting poppies, but if “seeming transience” doesn’t underscore the essential predicament we face as mortal humans treading upon this earth for the few years allotted to us, I don’t know what else does.

That predicament is eased, if not answered, by the social-spiritual milieu of neighbors and poppy lovers and life lovers with whom I share my tiny corner of this tiny planet in this massively mysterious universe. Along with them (and you? yes, definitely you), I take comfort in the vision, attention, and appreciation we all share for a communal life of beauty and bliss and the ever recurring mystery of spring (and its weeds).

Poppy photography gratefully acknowledged under Creative Commons licensing from flickr.com, top photo by pellaea, large photo in middle by tachikoma, bottom photo by Joanna Paterson (http://thisisnotphotography.com/).
***
Note: A slightly different version of this essay appeared in my church newsletter in 2011. Since then, I dug up the entire front yard poppy patch with a spade at the request of my wife, who proceeded to install planter boxes to grow vegetables while (ostensibly) suppressing the poppies with multiple layers of newspaper. A few vegetables have since graced our table, but the poppies have returned in great abundance, though very few weeds now disturb them. Meaning far less weeding for me. I believe this is what the self-help business books refer to as a “win-win,” blessed by Nature (and old newspapers). Happy spring!

3 comments to Weeding the Poppy Patch