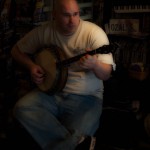 O.K., this is more like it. You know: It. The peace, the glow, the warm enveloping vibe spreading through your body & soul like a sweet dreamy transfusion, a triple dose of calm, clarity, cohesion.

Exhaling now, are we? Nice ‘n easy, sip a bit o’ lemonade, let the inhale just follow all natural-like, while these geetar and fiddle and bass players turn us a tune?

No alcohol. (Dry county, not a brown bag nor slightly deranged looking character in sight. And no bar noise spilling out onto the square louder by the hour.)

No amps. (Acoustic county, not a plug nor sound console to be seen on the lawns nor under the gazebos and porches that host maybe 100 or so musicians in variously sized groupings and affiliations on any given night in this music-drunk Ozark town.)

Mountain View is in this way a dream, a kind of still life artwork, a Thomas Kinkade portrait of a country and its ways that it would be impossible to replicate in all but the most sequestered circumstance.

Mountain View, Arkansas (population 2,748 in the 2010 census, down 128 residents from a decade earlier) hosts a couple of commercial folk festivals every year, with scheduled acts and hordes of tourists who pay admission charges in particular venues. But that’s not what gives this town its unique heartbeat, one that is far more brady- than tachycardia. (Go ahead, look that distinction up; I’ll be waitin’ right here in the shade while you visit your online dictionary.)

No, sir, it’s not the scheduled festivals that cloak this town with such easy natural charm.

Instead, it’s the unscheduled ambles of musicians coming downtown and marrying up with others of like mind and mood, maybe for a few songs, maybe all evening long, in roving, often interchangeable ensembles.

Sure, some players form organized groups, like a kick-ass bluegrass quartet from Mississippi that dropped in for a few days coinciding with our stay, staking out a slice of lawn next to the courthouse for what was much more performance than jam session. And a fine, fine performance it was, ending about 10:30 p.m. with an a capella rendition of Amazing Grace that included harmonies so celestial I found myself wishing they’d have burned it to a CD so I could have bought it on the spot.

Four guys in by-then sweat-stained shirts, givin’ it up for the Lawd on the lawn in Mountain View. For free.  About as sweet as it gets, eh? 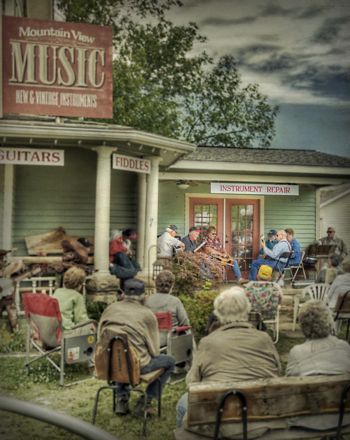 So you settle into your folding chair or park bench or just toss your blanket onto the grass in this Ozark Mountains hamlet, foothills, really, at 761 feet, temperature maybe 80 degrees, none too sticky yet in early June. The “Kin Folk’s BBQ” ice cream parlor boasts a perpetual long line. Music from the grouping just off its deck starts in, fades, ends, the players then engaging in light banter, aimless, until one of them plucks a string and others answer, or don’t, and they dally for a while longer until one of them plucks again or announces a song the others may know, or don’t, and the playing commences, most all of it exquisite. No one (save for the occasionally darting kid) moves faster than a saunter, or talks like a New Yorker.

The scene is, in a word, idyllic, and you find yourself pondering, Maybe they have something here. Maybe all those forwarded emails and Facebook posts from well-meaning friends and relatives decrying the ravages and complications of modernism, hearkening back to a purer simpler time in America when things were just, you know, better, have some veracity, some heft to them beyond the weightless dusting of sentiment.

And then you look a little more intently and you realize you haven’t seen a black or Latino or even Asian face in the three days you’ve been here. Not on tourists nor locals nor the hired help. Could this be true? Wikipedia’s report on the 2010 census suggested as much:

We had been in Memphis prior to Mountain View, catching a cab back from dinner with a loquacious African American driver who was only too happy to engage in the back-and-forth I always try for with cabbies as a rule of traveling. When the conversation got around to our next destination and we told him Mountain View in the Ozarks, he chortled.

Intrigued, I asked him, “Ever been there?” Given it probably wouldn’t be difficult to “detect” an African American if there were one, that statistic above—zero, goose egg, nada, no—African Americans in a population of nearly 3,000 strikes one as astonishingly unrepresentative of the country as it exists today. Mountain View is in this way a dream, a kind of still life artwork, a Thomas Kinkade portrait of a country and its ways that it would be impossible to replicate in all but the most sequestered circumstance.

Now the chortle turned to a full-on guffaw. He swiveled his body in our direction. “Look at me,” he said. “Look at this face. A black man in the Ozarks? Oh no. Never. That would not be good. No way.” 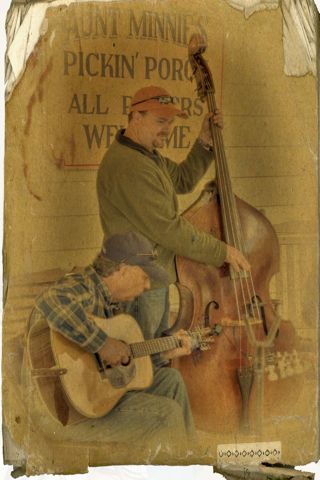 This vacation was inspired by a family reunion on my wife’s side, around which we decided to wrap music—Mountain View, Grand Ole Opry, Graceland, Sun Records—and civil rights history—First Baptist Church in Birmingham, the Lorraine Motel in Memphis.

For all the truly remarkable progress in race relations noted in my previous post, much remains undone, not the least of which is a black man’s citing the inadvisability of showing his face in an Ozark Mountain town in 2013. Would anything happen if he did? Oh, I doubt it, though the few Confederate flags we saw on this journey did show up there, draped on a car, a house, as a not-so-vaguely threatening badge.

No, the easy peaceful feeling of Mountain View is not strictly mirage. There is genuine goodness here in the proffering of an open and inviting ethos, come one, come all, preferably but not necessarily with an instrument. It’s an ethos built and sustained on the universal language expressed by guitar, fiddle, banjo, bass, and lyrics of love and longing, betrayal, grief and whimsy.

All the usual, in an unusual town, a surface-level idyllic town, that no doubt harbors the usual addictions, faithlessness, and abuse seen in other towns, but which, in this presentation of music’s essential goodness, its capacity to promote casual, heart-gladdening hookups that hold the promise of the beautiful, represents something elemental and good in us that we would be fools to ridicule. Or, in my own case, to not revisit.

If only we could come to a time in this country when my Memphis cabbie would feel good accompanying me.

The 13:35 You Tube clip below is a nice representation of the Mountain View music experience, with live clips commencing soon after the introductory photography. Its title, however—”Music in the Off-Season”—is misleading, since extensive consultations with the locals convinced me there is no real “off-season” in Mountain View, where pickers of every persuasion gather through every time of year, only the foulest of weather driving them indoors.

Mountain View photos above courtesy of  McKinney, Texas-based photographer Mark Powers, who used texturing software to create the lush painting-like effects of these familiar scenes around the town square. His work can be viewed and he can be contacted at: Flickr: m_powers’ Photostream, all rights reserved.

Rotating banner photos top of page (except for the books) courtesy of Elizabeth Haslam, some rights reserved under Creative Commons licensing, see more at: https://www.flickr.com/photos/lizhaslam/