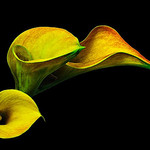 A little more than 40 years ago, I literally wandered into my first job out of college, a totally unplanned and unprepared for happenstance that nevertheless bequeathed to me a timely, early exposure to the whole faith-in-the-human-race idea that has helped sustain me ever since. A week ago, I met back up with some of the people from that job, most of whom I hadn’t seen since then, at a reunion that made the intervening 40 years seem like a short stroll we had all taken around the block to catch a breath of air.

The situation in the winter of 1973 was that my college counselor had miscounted my transcripts and I was one unit short of graduation that was looming just a few months hence. No problem, the counselor said, we could always arrange a community service project to pick up a unit—did I have any preferences? “Well, I dunno, I always wondered what it would be like to work with retarded kids,” I replied. (“Retarded” was the operative term at the time, so please, save yourself the effort of correcting my outdated usage.)

So it was quickly arranged that I would visit the Riverside County Development Center for Handicapped Minors (RCDCHM for short and “DC” for even shorter), and settle in for a weekly stint of three hours or so in order to earn the coveted unit.

I’ll always remember my first steps inside the gate. Closing it carefully behind me, I beheld a teenage boy, rail thin, shooting up and down on a trampoline to astonishing heights, all the while with his elbows tightly crooked, clenching his hands furiously, and emitting the most god-awful mysterious noise that required close attention from me to finally discern that it was coming from his grinding teeth.

I watched utterly transfixed as staff members stood by, smiling benignly, encouraging him occasionally with a “Go, Roger!”

And I thought: “I love this place already.”

Development Centers were a California phenomenon, just a couple of years old at the time, an early concession in the long-running, slowly evolving push to grant educational access to what had theretofore been a throwaway portion of society: children with such severe disabilities (cerebral palsy, muscular dystrophy, Down’s syndrome, all manner of other conditions) that even public school special education classrooms could not tend to their needs.

Typically, these children either stayed with parents 24/7/365, or were institutionalized in convalescent or state hospitals. Many of them, ages 3-21, hadn’t  yet mastered basic toileting, grooming and other self-care skills. Even chewing and swallowing were often problematic.

In sum, they were extremely low functioning, and until the birth of development centers, the prevailing message to their parents was, “Your child doesn’t matter, and there is nothing we can do. Good luck!” 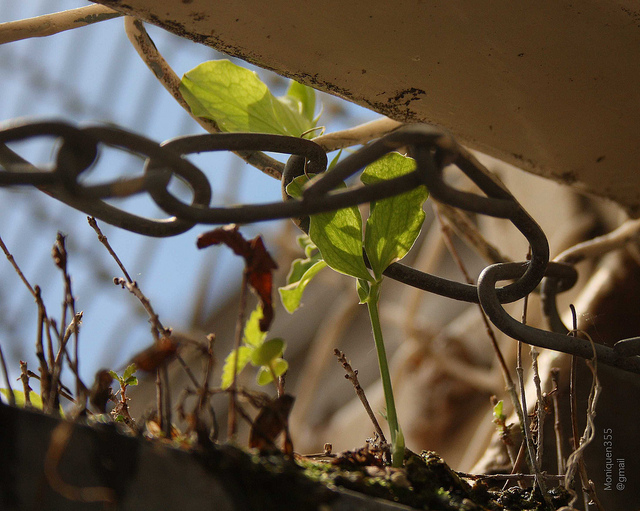 And there I was, fresh off the end of my college basketball career in which body mastery was fundamental to my identity and enjoyment of life, entering a world of diapers on 16-year-olds, drool and snot and worse on every surface, and the most peculiar grunts and burbles and “wheeeeee-eeeeh-eeeeh-eeehs” emitted as the equivalent of communication by what can only be described as a motley crew of extremely offbeat, definitely marching-to-their-own-drummers “students.”

And God, I loved almost every minute of it. (With the exception of the diarrhea cleanups.) (And the vomiting at the lunch table…)

The DC staff was mostly but not all college educated, almost none of us credentialed. We shared a decided idealistic, peace-loving hippie vibe that was reflective of the times. Given the student population, the state didn’t dare to require and really didn’t care about our qualifications to teach as such—the point was just to get some warm bodies in there to give these hapless kids a modicum of day care under the cloak of “education.” But boy, did we have other ideas.

Us being hippies and long after first Nietzsche and then Time magazine had declared God dead, there was no overt religious sentiment driving the DC agenda. But oh, was there ever a fervor for a righteous cause.

In place of a principal, DCs had a “lead teacher,” and ours was a charismatic gay man with a distinct masculine exterior and an inside of mush. He was given to regular impromptu soliloquies on the basic human rights of these dispossessed children and their beleaguered parents, and our responsibilities in standing up for them. A decade older and far more self-assured than most of the staff, he inspired a kind of awe at the time, and he grabbed the classic hero role and ran with it, antagonizing the hell out of the downtown educational bureaucrats.

He delighted in being a burr under their saddle, not satisfied with them having created this program for him and his ragtag staff, but now actually demanding more attention, more resources, more leeway for his crazy schemes. (Cabbies rather than buses should transport kids to and from school, is he nuts? Yes he was, and yes, they did.)

A couple of months after starting my volunteer stint, the lead teacher asked me if I might be interested in substituting (for pay!) when teachers were out ill. Being of a generally analytical and deliberate nature, I responded, “Of course!” Soon enough, I was getting called to come in as my school schedule allowed, and later in spring, a teacher was preparing to leave and I scored the job soon after my graduation.

Over the next year and a half, before a neighboring and new DC lured me away with a hefty promotion, I occasionally wondered what was the point of pouring so much of my heart and soul into kids who had no chance of accomplishing anything important or even living semi-independently in their limited lives. But then I would realize, even at that tender age, that unless one’s name is Abraham Lincoln or others of that ilk, who really “accomplishes anything important?”

Who, in the end, isn’t quickly turned to dust and forgotten, a mere name on a family tree, with a detail or two at most to interest their heirs? The idea that I was any more “important” than these kids, and that working to enhance their lives was somehow beneath my station and unworthy of my time, was and remains odious on its face, not to mention ridiculous and illogical.

Exactly what more important matters could I have been pursuing?

And none of that is even to mention the support, which is too weak a word, that we provided the kids’ parents, who mostly worshipped the ground we walked on, for all their appreciation that finally, after all these years of neglect and denial from a society that professes to believe that “all men are created equal, endowed by their Creator…” and so on, finally, someone from that society looked at and took in and touched and cared for and even delighted in their long-ignored children.

It was a wonder for the parents to behold that development after such a long time in the wilderness of “How long, Lord, how long?”

Us being hippies and long after first Nietzsche and then Time magazine had declared God dead, there was no overt religious sentiment driving the DC agenda. But oh, was there ever a fervor for a righteous cause, a perfect example of what in many ways is secularized religion-in-disguise, involving all the righteous outrage and quest for justice exhibited by Jesus and Gandhi and all their cohorts through history, minus any dogma. (Unless “Aw, screw those downtown edicts!” qualifies as dogma.)

When I think back to Roger and his clenched body and being, Stevie with his floppy everything, Laura with her poker expression and enormous appetite and desire to rock in peace on the couch without being harassed by us to walk a damn balance beam, I can’t help but recall the conversation Jesus had with his disciples, when he is urging them to get on with the business of caring for the unfortunates in life:

‘For I was hungry, and you gave me something to eat; I was thirsty, and you gave me something to drink; I was a stranger, and you invited me in; naked, and you clothed me; I was sick, and you visited me; I was in prison, and you came to me.’ Then the righteous will answer him, ‘Lord, when did we see you  hungry, and feed you, or thirsty, and give you something to drink? And when did we see you a stranger, and invite you in, or naked, and clothe you? When did we see you sick, or in prison, and come to you?’ The King will answer and say to them, ‘Truly I say to you, to the extent that you did it to one of these brothers of mine, even the least of them, you did it to me.’

I often look at my experience with the DC as privileging me to be right in the middle, in my small way, of the long continuum of struggle for human rights. Freeing the slaves, emancipating women, providing access to education and facilities for the disabled, ending discrimination toward gays: these are all of a piece, all part of a gradual evolution, a recognition that we are all God’s children, all equal and worthy of dignity, acceptance and the pursuit of happiness.

These developments are all so obviously needed and seemingly inevitable in retrospect that it is easy to overlook how much struggle they required, how many minds had to be changed and hearts softened for the most basic human dignity to be proffered and made manifest.

Even the least of them.

It’s hard to think of a more trenchant guideline for how we are to approach and seek to lighten the burdens of our most dispossessed brethren in a life that is merely difficult in the best of circumstances and out-and-out unbearable in others.

The DC staff I was fortunate to bump into 40+ years ago set a model for not only supporting the least of them, but going one better by drawing out, affirming, and delighting in the unique character each of them was. It was a lesson that thundered home to me simultaneously with closing that first gate and hearing all the amazing sounds and seeing all the amazing sights that I did, a hearty “Go, Roger!” punctuating the entire scene.
*** 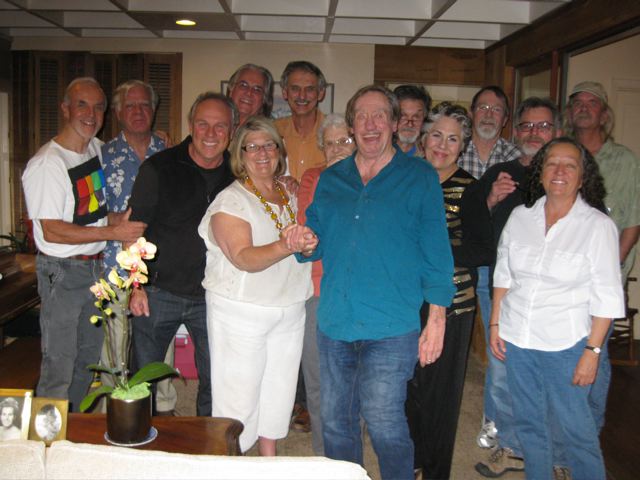 More than 40 years later, still upright and happy and full with memories.

Many thanks to the photographers: rotating banner photos top of page courtesy of Elizabeth Haslam, some rights reserved under Creative Commons licensing, see more at: https://www.flickr.com/photos/lizhaslam/

No idea which reunion-goer friend took the DC staff photo, but deepest thanks in any case!