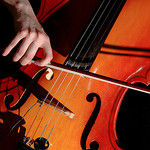 Classical music via large symphony orchestras has been on the ropes as long as I can remember. Perpetually white-haired audience members dying off and not being replaced at quite the same rate, pinched budgets, arts education in schools a shambles, the populace burrowed down with its headphones, no doubt listening to vapid pop music or worse.

Or so the narrative goes, and there is plentiful evidence to support it, with classical record sales in steady decline and symphony orchestras in various cities going kaput.

It’s one reason why the field tries to sell sexy soloists, a phenomenon explored in a post several months ago. But many problems beset the genre, not the least of which is a certain kind of stultifying air, bringing to mind stuffy Vienna drawing rooms, man wigs, and deeply sober approaches to musical expression. For all the inner rapture, spiritual probing and transcendence propagated by masters such as Beethoven and Mozart, symphonic music’s performances often seem encased and constrained, like one of those thin wax skins around sausages that keep them from sprawling all unkempt and sizzling across the entire pan.

So it was with a certain wide-eyed, ultimately finger-snapping amazement that I witnessed an alternative form of symphonic musical expression last Sunday in a performance of the Bahia Orchestra Project, a 100+ member entourage of young players from the coastal region of Brazil who dress nicely like classical orchestras, play the same instruments, perform some of the same music (though it tends toward more 20th century works ala Villa-Lobos and Stravinsky), and who cue off a charismatic conductor who sets it all in motion with a downswing of his baton.

But that is about where the similarity ends. 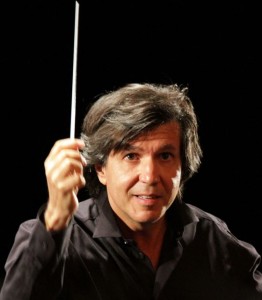 In what amounted to a vision for where large orchestral music might go if it is to continue attracting not only fresh audiences but also fresh younger players, the Bahia group amped up the verve, energy and audacity about 10-fold over your standard orchestra in a longish program that left the almost foot-stomping crowd begging for multiple encores. After lovely but relatively restrained opening numbers from Tchaikovsky and Ravel, the group’s founder and conductor Ricardo Castro let out all the stops with his young charges (mostly late teens to early ’20s) after intermission with a set of rousing, heavily percussive offerings from the Southern hemisphere: by the Mexican composers Silvester Revueltas and Arturo Marquez and Brazil’s national treasure, Heitor Villa-Lobos.

Picture soul dancing percussion players, cellists spinning their instruments on their spikes in between measures, violin players in one section jutting up from their seats with a phrase and then having it volleyed back as they sit down again and their opposites stand in response. (Kind of like the wave one used to witness at sporting events, except the participants are playing instruments the entire time.)

It would be different if they couldn’t play, but make no mistake, these were accomplished players, altogether worthy of accompanying major soloists such as pianist Jean-Yves Thibaudet, who played the Ravel Piano Concerto in G Major and suffered not for these youths’ strenuous backing.

And even without the overt playful gimmickry, the individual members’ standard playing styles tended toward the intensely bold, bodily, and rhythmic, fully inhabiting their instruments and throwing themselves body and soul into their music and that of their mates around them.

In the standard classical repertoire one sees today, it seems only the conductors and soloists are allowed to express their inner selves, the joie de vivre of full habitation and immersion in this glorious enterprise of musical celebration. Otherwise, most all other players seem to be studies in almost robotic restraint.

Not so the Bahia Orchestra. Everyone—right down to the diminutive fourth violinist in the back row—engages his or her instrument like Pablo Sandoval in the batter’s box, full of zest and focus and a spirit of rollicking, gangly adventure.

“Rise, shine, let me have it,” Castro seems to convey to them. “Don’t leave any of this performance and your precious piece of it under your chair.”

So I caught myself wondering: Is it as simple as most symphony orchestras being historically rooted in central and northern European mores—Germanic and cool and cerebral, disembodied, straining to leave the confines of time and mass and gravity behind via the glories of perfectly controlled symphonic expression?

Vis a vis this orchestra hailing from the Southern hemisphere, hot and involved and incarnate, seeking its release via ultimate immersion, through sweat and sinew and full-body joy, feeling rather than thinking, broadly smiling rather than furrowed, playing with abandon rather than restraint? 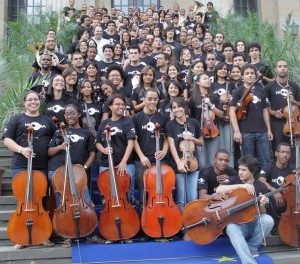 Is it as simple as there being two kinds of symphonies in the world, reflecting the two kinds of everything else, these oppositional principles of North and South, Apollo and Dionysus, ice and fire, however many gradations we may discern along that spectrum? And that the South is increasingly ascendant, ready to remake the world?

I am reminded of a poetry debate I followed years ago, with one school holding that in live readings, poetry should be read flat, the power of the words allowed to shine forth on their own without any distracting theatrics from the reader.

The other school said heck with that, the poet reads from a stage, which is where entertainment and enchantment happen, so let us give the words their full majesty and due, singing them to the heavens as angels, to that choir of angels above.

My inclinations go toward the second school.

By injecting unexpected swing into the symphonic repertoire, adding elements of play, whole body immersion and unfettered joy, the Bahia Orchestra Project points a way forward for both players and spectators, presenting a vision of a modern, less musty application of a now ancient art form that is increasingly showing its age.

If the response of the audience last Sunday is any indication, there’s plenty of life left in the old dog of symphonic music. She just needs to learn a few new tricks.

***
The Bahia Orchestra joins renowned pianist Lang Lang in this performance of the difficult (and rollicking) Tico-Tico no Fuba, a favorite encore piece.