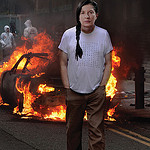 Is it possible for art to cross a line into such monstrous or simply offensive or empty moral terrain that it is no longer deserving of categorization as “art?” A quick look at dictionary.com’s basic definition of art yields this: “the quality, production, expression, or realm, according to aesthetic principles, of what is beautiful, appealing, or of more than ordinary significance.”

“According to whose aesthetic principles and using what metric of the ‘beautiful,’” I can hear First Amendment civil libertarians and self-styled avant garde artists asking already. Good questions.

The questions have particular relevance to post-modern art, that period from roughly the post-World War II years and extending into the present day.

Post-modernism, in brief, can be described as an effort across the art and philosophy and larger cultural worlds to extend the conversation after classicism and modernism, the Enlightenment and the scientific revolution, had purportedly brought the world into sharp focus and order and had said all there was to say about life, beauty and form. By smashing beyond such boundaries—think of Jackson Pollock angrily (merrily?) tossing paint spatters onto the canvas in what we might call “Screw you, DaVinci!” moments—post-modernism questioned the very ideas of truth, beauty, form, harmony and genteel aesthetic pleasure.

As a self-professed liberal, I am pledged to be open to multiple perspectives, to appreciate there are six different ways to slice a tomato, and no doubt a seventh that awaits someone’s imagining.

Which brings us to Marina Abramovic. Recently, I reflected on life and ego in the Age of Facebook, and the sometimes subtle—and sometimes not—distinction between healthy self-expression and unabashed narcissism. Abramovic, a “performance artist” with a keen  ability to elicit responses ranging from “colossal fraud!” to “transcendent visionary artist,” is notorious both for the nature of her performances and her uncanny self-promotion. Her most recent project involves nothing less than launching an “institute” and a “method” in her name, with the express purpose of, among other things, “changing the consciousness of human beings on this planet,” as she recently told the New York Times.

The method, Ms. Abramovic explained, flows from exercises she devised to prepare participants to enact or experience art. Examples include swimming naked in a freezing river, expressing your anger to a tree, spending an hour drinking a glass of water, or walking for four hours in one direction and four hours in another. 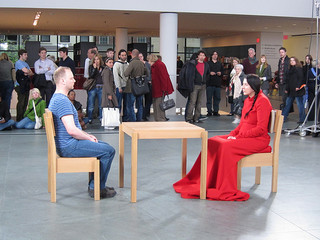 Previously, she had been limited to less institution-building pursuits such as public self-mutilation and setting herself at a table in a museum where hundreds of people lined up to sit across from her and stare silently into her eyes. She stared back, and after an interval, the person left and another sat in to take his or her place. This went on for 736.5 hours over a two-and-a-half-month span.

As a self-professed liberal, I am pledged to be open to multiple perspectives, to respect the experience and views of those different than me, to listen long at a table where everyone is welcome by birthright, to appreciate there are six different ways to slice a tomato, and no doubt a seventh that awaits someone’s imagining. My borders thus tend to be loosely defined, slightly awash, shorn of sharply defined edges.

This stance of openness to a multiplicity of experience and expression tends to make liberals hesitant to render hard and fast aesthetic and even moral judgments. Or at least to be wary and suspicious of them.

So does this mean I simply shrug and say, in that way we had in the ’60s, “Oh well, different strokes for different folks” when Abramovic carves into her stomach with a sharp knife in a museum performance piece, letting the blood flow where it will?

Or can I just say, while still maintaining some semblance of liberal cred, “Oh God, what loathsome bullshit.”?

Another exhibit: A man arranges to be shot in the arm on film, to which he adds a soundtrack with instructions in the film so viewers will be prepared to listen to the different auditory phenomena that ensue. After the 8-second video plays, these words come on the screen to conclude the proceedings: “Sound of cartridge falling to floor.” Thank you for that deep insight, I found myself saying.

Another adopts a dog for the purpose of shooting and killing it on film. 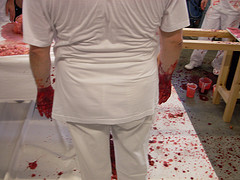 Then there are the ritual self-mutilations, the naked bodies rolling around on the floor along with fish parts, raw chickens and sausages, the climbing of a ladder in bare feet with razor blades stuck into each step.  One is tempted to say, “You could not make this stuff up,” except that people do, and they sometimes become rich and famous for their efforts. And it is called “art.”

But is it? Perhaps it is, after its own fashion—who gets to decide? This is one of the very questions performance artists ask most emphatically as they invent ever new ways to beget the additional questions, “Now what the hell was that about? Is this all just a big joke?”

Who, after all, are the tradition-keepers, the judges, the holders of the keys to the sanctum sanctorum wherein lie the holy documents that define and delineate between what is art and what is simple depravity? And what is “depravity” anyway?

Here, I am reminded of the late Supreme Court Justice Potter Stewart’s famous reflection that while it is difficult to define hard-core pornography, “I know it when I see it.” 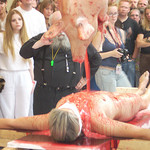 And when a performance artist reenacts the torture of a Christian martyr by torturing himself in front of a live audience, or “explores” religious ritual by having a large group of people toss and tear in utter frenzy at animal carcasses and their entrails on a blood-drenched stage while two blindfolded participants writhe “crucified” on crosses beneath them, bathed in blood of their own mixed with that from calves and what looks like various shades of red paint, I can say with some confidence that I know depravity when I see it, and I just saw it—courtesy of You Tube. (How many “Likes” might I garner on Facebook if I post that link?)

Or do you just say, hanging your head ever so slightly, “Gee, I wonder if that makes me a moderate?” How hopelessly unhip would that sound in the earnest galleries of SoHo?

In Abramovic’s case, sure, there is depravity involved. Ingesting drugs to induce a catatonic state on stage for the benefit of paying customers—WWDS? (What Would DaVinci Say?)

But on another plane, we can view her as a kind of master psychologist, mixing about equal parts Freudian transference and Jungian archetypes, major dashes of religious ritual, a plethora of DeSade, and a whole cartful of PT Barnum in a hyper-hip New York-Paris-Vienna art world that eats this kind of stuff for breakfast and is already hungry again by mid-morning.

But it’s art strictly as idea, as abstract psychological ploy, not as product. Watching someone staring at others at a table for 736.5 hours? A classic line from one “Perry Logan” in the comments section of a Huffington Post story on Abramovic: “Performance art is what you do if you just can’t draw.”

Indeed, the talent here is for what, exactly? Outrage? Pulling our legs?

Here’s the thing: I believe human beings are programmed for beauty. (We are also programmed for violence and mayhem when chasing down prey or defending ourselves from predators, but let us confine ourselves to discussion of our artistic/aesthetic sensibilities here.) It is in our very natures to respond to flowers and sunsets and harmonious sounds coming from our pianos. Our capacity for recognizing and responding to the basic elemental beauty of the world that surrounds us isn’t learned via Skinnerian reinforcement. The reason we don’t like clangy screechy fire alarms is not because every time we encountered one as children everyone around us ran around and the ensuing chaos negatively conditioned us toward fire alarms.

It’s actually much simpler than that: the sound of screeching fire alarms is assaultive and inherently unpleasant. It is not mere “interpretation” as various French philosophers would have us believe, but a primal experience of unpleasantness that grates on our beings in a direct, unmediated way.

It takes some doing, some deconditioning or mistake of nature, to quell our basic human response of squirming at the sight of spurting blood and the screams of the tortured.

As we think about the implications of this for “art” that revels in depravity, we note that attraction to beauty and revulsion at the ugly is the baseline. Yes, we can condition ourselves or be subject to some accident of birth or genetic anomaly that allows us to stomach and even be fascinated by grisly depictions of bloody entrails and human sacrifice, but it takes some doing, some deconditioning or mistake of nature, to quell our basic human response of squirming at the sight of spurting blood and the screams of the tortured. These sights are not a part of the genetic programming that instead draws us so inexorably to the beautiful, the generative, the elevated, the harmonious and the serene.

“Now I understand that my work is not my work anymore. It’s about culture in general,” Abramovic also told the Times as she completed an early round of funding for her institute with a visit by and resulting video of a naked Lady Gaga indulging in its “self-awareness” exercises and endorsing the project.

If it is about culture, one is right to wonder what that culture is becoming, though narcissism and depravity under the guise of artistry and even nation-building have been around for a long time now. And much performance art is not so much depraved as just plain silly. The world has seen worse than cocktail-sipping sophisticates watching a woman in a staring contest with a donkey, part of another Abramovic exhibition much lauded in various prestigious arts journals. You can see it here below—it lasts only a minute.

Soon, I’ll invite you to spend only half that much time as you rotate with admiring throngs into my walk-in closet for 30-second intervals so you can behold me rearranging my sock drawer eight hours a day. I haven’t decided whether to be naked yet, but I will definitely add a soundtrack, for which I will pass right by Bach and Haydn and proceed directly to Schoenberg. I’ll call it “Homage to Atonality ala Sock Drawer.” I promise to be earnest, and as a bonus, to stare deeply into your eyes when you arrive.

Photo of Abramovic in front of burning car courtesy of Kolektiv Smetnjak, some rights reserved under Creative Commons licensing, see more at: http://www.flickr.com/photos/smemetnjak/