We’re into our annual holiday music mode, our surroundings suffused with traditional Christmas carols and pop songs saluting the season. Little drummer boys going pa rum pum pum pum, sleigh bells jingle-ing, ring-ting tingle-ing, oh, but we have a merry time gliding through the malls and filling our baskets with impossibly packaged toys that resist penetration with all the impregnable fortitude of Fort Knox, do we not?

But amidst all the commercial ballyhoo, there lies a more contemplative dimension: that of a sacred inwardness, a bow to darkened days, the denuded trees and grayed skies of winter, with its incipient if distant promise of renewal.

In much of the world, the symbol of this promise revolves around a child born in a manger to a poor couple, a special star appearing in the sky to note this birth was destined to transform the world. (Wait: doesn’t every birth do that?) (Oh! Could that be the message??) 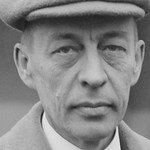 The Russian composer, conductor and pianist Sergei Rachmaninoff (pictured to the right) addressed that scene in the 6th song of his epic choral work, “All Night Vigil,” paying homage to the Christ-child’s mother, the venerated Virgin Mary.

Unlike most other entries in this “Brilliant Songs” series, “Bogoroditse Devo” (“Rejoice, O Virgin”) is sparse on lyrics, based as it is on one of the world’s more frequently enunciated prayers, the “Hail Mary.”

But lyrics matter hardly at all when the music itself sets a tone combining such beautiful heavenly rapture with solemnity that even the most secularized modernists would feel compelled to bow their heads and at the very least embrace an inner quietude that I would submit is no less sacred than the most devout prayer.

Let’s treat ourselves now to three minutes and nineteen seconds of that beauty before returning for some discussion.

Rachmaninoff, as abundantly evidenced above, is a paragon of the Romantic era and author of arguably the most soaring and lush melodies in music history. He had been steeped in the Orthodox religious tradition of his homeland, courtesy of his maternal grandmother, who had stepped in to guide the six siblings’ religious development after his father squandered the prosperous estate bequeathed by the maternal grandparents. He then abandoned the family, though his 10-year-old son Sergei had already shown signs of the musical brilliance that would in time pay off with patrons to help support his studies.

Although Rachmaninoff professed no particular religious affiliation by his adult years, the church bells and liturgical chants his grandmother exposed him to in his childhood never stopped resounding through him.

His Second Piano Concerto in particular (previously blogged about here) and Second Symphony had vaulted him to worldwide acclaim in the early 1900s, and by 1915 he had turned his attention to the ancient chants and choral works that had grown from them among a host of Russian composers led by Tchaikovsky.

This was to be music, wrote one of that group, the composer Alexander Kastalsky, “that can be heard nowhere else but in a church.”

And also be expressed through no other instrument than the human voice.

Though the 15 parts of “All Night Vigil” vary widely in content (and are all more than worth a listen in their own right, see below), what unites them are lush harmonies and dynamics that build up and down from the quietly sublime to the soaring and triumphant.

We hear most of this range in “Bogoroditse Devo,” which begins in a tone of solemn adoration in the low ranges, the singers careful in their restraint and closely eyeing the conductor. This gives way near the two-minute mark to an unleashing of emotion and energy suggesting an ocean wave that crests, tumbles and slowly trickles its way to shore, its rivulets of sound finally coming to their rest.

“Blessed is the fruit of thy womb,” conclude the prayer/lyrics. “Thou hast borne the Savior of our souls.”

Whatever any given individual interprets and believes about that, if we survey the centrality of music throughout recorded history, it’s hard to argue with how ubiquitously it transforms, consoles, inspires, informs, and yes, saves our so-very-human lives.

And how in the hands of a master such as Rachmaninoff, it transports us to a place we know in our bones to be our deepest and most true feeling of kinship with all that is, and has ever been.

Magi art and Rachmaninoff photo from the public domain