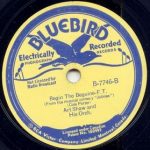 Sometimes, a song strikes us as so lovely in melody or phrasing that the singer could be reciting the New York City phone book, as the old saying goes, and we’d be over the moon and humming the thing all day long. Other times, the writing is so poetic or haunting that the melody need not enter our bloodstream, as it were, for us to be moved to tears.

The very best songs, of course, cover both those bases, tickling our melodic bones and stimulating our cravings for language that tells a meaningful tale, suggests a profound truth, or just plain sounds fun and clever and worth repeating to friends.

So it is with Cole Porter’s “Begin the Beguine,” a rollicking, witty, and musically complex song that Porter’s publishers banned to the “B” side as a throwaway to the anticipated hit of “Indian Love Call” for the bandleader Artie Shaw when it was first pressed into a record in 1938. This was three years after the song was written and debuted in the Broadway musical, “Jubilee,” unrecorded and unacclaimed.

As it was, “Beguine” became a monster hit for Shaw as an instrumental, so listeners had to await the later versions—now totaling well over 100—for a huge variety of artists to give the song the particular lyrical spin that most called to them.

My favorite story of the song’s origins (there were several) shows Porter as the true word lover he was. His biographer Charles Schwartz cites a letter that Porter wrote to a fan:

“I was living in Paris at the time and somebody suggested that I go to see the Black Martiniquois, many of whom lived in Paris, do their native dance called The Beguine. This I did quickly and I was very much taken by the rhythm of the dance, the rhythm was practically that of the already popular rumba but much faster. The moment I saw it I thought of BEGIN THE BEGUINE as a good title for a song and put it away in a notebook, adding a memorandum as to its rhythm and tempo….About ten years later [on an island to the west of New Guinea, in what is now Indonesia], a native dance was stated for us, the melody of the first four bars of which was to become my song.”

What I love about that is Porter hearing the “The Beguine,” thinking right away to lead it off with “Begin,” and then filing the little song phrase away for a decade until he got a second inspiration from the Indonesian dance. 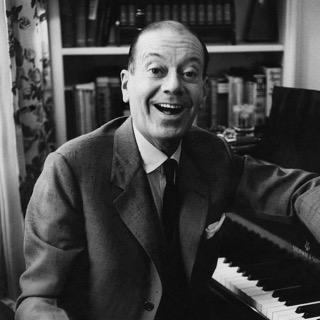 This is exactly how it works with writers. Phrases, ideas, themes, entire book ideas float around barely beyond the edge of their consciousness until the ideas are snagged, or intrude themselves into a dream or the writers’ first thought upon awakening, or when washing the dishes or shampooing their hair.

Here it comes, out of the void, and one does well to note it on a scrap of paper, a bar napkin, or these days, on the Notes app of a cell phone for future retrieval.

And then comes all the rest of it, hooked to a compulsively hummable tune, which Porter wrote with a highly unconventional 108-measure length rather than the standard 32. The song thus taxes the phrasing abilities of most singers, making it all the more beguiling to listeners like me who have no idea we’re listening to an unconventional technical structure but do appreciate that what we’re hearing is just “different.” (And compelling, and a whole buncha fun…)

So, let’s have a listen and a look, shall we, with the additional treat of it being via an altogether remarkable performance by Fred Astaire and Eleanor Powell, tearing it up as few have done before them or since. Then we’ll get to a little lyrics discussion/appreciation before wrapping things up with a few more You Tube versions that will exemplify the amazing range and impact that various interpretations of the same song can give to us.
***

Well! Was that just about the coolest three and a half minutes you’ve ever spent in your life, or what?

It’s hard to underestimate the sheer style, talent and pizzazz of the Astaire-Powell duo, which could and may yet be fodder for a whole other blog post, but we are gathered here today to talk about the Cole Porter song to which they do such profound justice, so let’s get back to Porter’s genius again by reading his lyrics.

I’m with you once more under the stars,
And down by the shore an orchestra’s playing
And even the palms seem to be swaying
When they begin the beguine.

To live it again is past all endeavor,
Except when that tune clutches my heart,
And there we are, swearing to love forever,
And promising never, never to part.

What moments divine, what rapture serene,
Till clouds came along to disperse the joys we had tasted,
And now when I hear people curse the chance that was wasted,
I know but too well what they mean;

Oh yes, let them begin the beguine, make them play
Till the stars that were there before return above you,
Till you whisper to me once more,
“Darling, I love you!”
And we suddenly know, what heaven we’re in,
When they begin the beguine

So: we have a love story here, ardor and romance spilling over with all the power that memory can bring to bear.

And in typical Porteresque fashion, it is wonderfully articulate, a language lover’s dream of word pictures, with rhymes galore and images brought richly to life:

…tender/splendor
…playing/swaying (with an orchestra “down by the shore”)
…What moments divine, what rapture serene/Till clouds came along to disperse the joys we had tasted

And then this killer line:

To live it again is past all endeavor,

Yeah, I know, he needed a rhyme for “forever,” but still, who uses “endeavor” in a song lyric and can get away with it?

Especially when he follows it up with the universally understood sentiments that pour directly from his passionate, expressive heart:

Except when that tune clutches my heart,
And there we are, swearing to love forever,
And promising never, never to part.

He seemed to take great delight in the sheer beauty of words that were evocative and cleverly paired, exhibiting a playful spirit that spilled throughout his oeuvre, not least in titles such as “Let’s Do It,” “Let’s Misbehave,” “Anything Goes” (yes, he had a serious naughty streak), “My Heart Belongs to Daddy” and “It’s De-lovely.”

We are not likely to see the likes of him again, and if I may borrow from another set of his lyrics in addressing his memory, I’ll close with this before linking to a few more You Tube videos below, just so you can, at your very own leisure, enjoy some additional Cole Porter-ish fun:

***
Here’s the original hit version from Artie Shaw and his big band:

And finally, a love-it-or-hate version that takes an already complex song and puts a wholly new spin on it by shifting to a minor key, courtesy of the contemporary pop-rock-country star Sheryl Crow.

7 comments to Brilliant Songs No. 3: Cole Porter’s “Begin the Beguine”