Bringing Joy to “The Snow Man” by Wallace Stevens 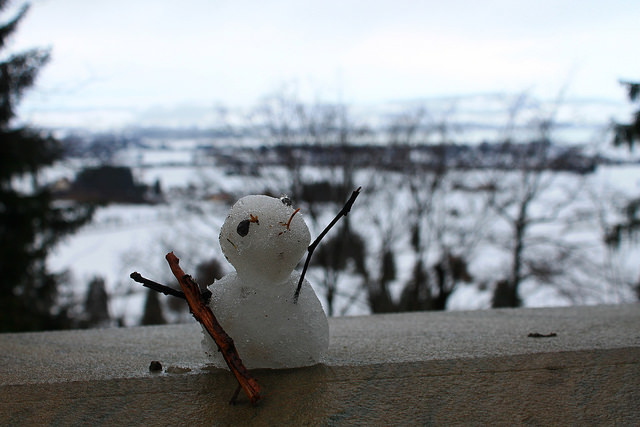 One must have a mind of winter
To regard the frost and the boughs
Of the pine-trees crusted with snow;

And have been cold a long time
To behold the junipers shagged with ice,
The spruces rough in the distant glitter

For the listener, who listens in the snow,
And, nothing himself, beholds
Nothing that is not there and the nothing that is.

The snowman in this well-known Wallace Stevens poem from 1921 presents as a rather bleak figure. As we read in the 15 meticulously crafted lines above, he’s been “cold a long time,” immobile and inert, devoid of any thought linking the winter landscape in front of him to feelings of “misery,” barrenness and other associations that humans want to project onto winter.

Stevens, who worked most of his adult life as an insurance executive by day and wrote Pulitzer Prize-winning poetry in his leisure hours, uses the snowman image to urge his readers “not to think/of any misery in the sound of the wind/in the sound of a few leaves.”

The landscape exists unto itself, having been nothing before it came into being, eventually returning to nothingness, and in the meantime, we should realize that we are the same, and it is only our projections, our romanticization, our imagination, that makes winter feel either barren and forbidding or impossibly beautiful and sublime.

Stevens experienced a kind of reaction formation to his early hero, the Romantic poet John Keats, in rejecting ardent immersion in and identification with nature. Not for him the floating off into netherworlds of dreamlovey bliss. That’s not the insurance man’s way, after all.

Stevens instead espoused the “perspectivism” of his philosophical hero Nietzsche, holding that everything we like to think of as objective ”reality” is immediately altered with the thinking and consciousness that we bring to bear on it. It’s all a matter of perspective, feelings, points of view that we adopt from our experiencing, subjective selves, which quickly comes to bear little or no relation to the objective thing unto itself.

So there the snowman sits, created from our imaginations to be a happy figure as we festoon him with sticks and branches for ears and arms, pine cones for buttons and a carrot for his nose, all gussied up and imbued with our dreamy projections of winter bliss.

Is he still happy? Does he miss us? Should we be sad for him, left out there to fend for himself in the bitter cold while we cozy up indoors with hot chocolate and more potent adult beverages of our choice?

The questions are ridiculous, of course.

Bleak? Only from a certain “perspective!”

Because, in the contradictory way of such things, Stevens’s poetry, its rich imagery and music, is itself a refutation of the very notion of nothingness. Poetry, music, art (he loved Klee and Cezanne) are emphatic “somethings,” reflecting the fires of imagination by which we create our reality and make a world.

In Stevens’s view, the world presents itself to us and we impose upon it our “blessed rage for order,” a line from his later (1934) poem “The Idea of Order at Key West.”

It was her voice that made
The sky acutest at its vanishing.
She measured to the hour its solitude.
She was the single artificer of the world
In which she sang. And when she sang, the sea,
Whatever self it had, became the self

So now, this long true-winter-starved California boy having just come through an epic snowstorm in the usually genteel south of Durham, North Carolina, I’m going to bring my own blessed order to Stevens’s snowman by focusing on the raw and wondrous initial beauty of snow, its 10 or so inches of soft white powder falling from dawn to dusk earlier this week having created a wonderland for my boots to crunch down on, my eyes to cast themselves upon, my heart to soar from.

The slush and mud and black ice need not concern us now. Let’s go instead (for the few blessed moments granted to us in what we can only hope will be a continued succession of them) with the beautiful and sublime, in the form of imagery from the Great Durham Snowfall of 2018.

It’s our world to create, after all. Wallace Stevens told us so. 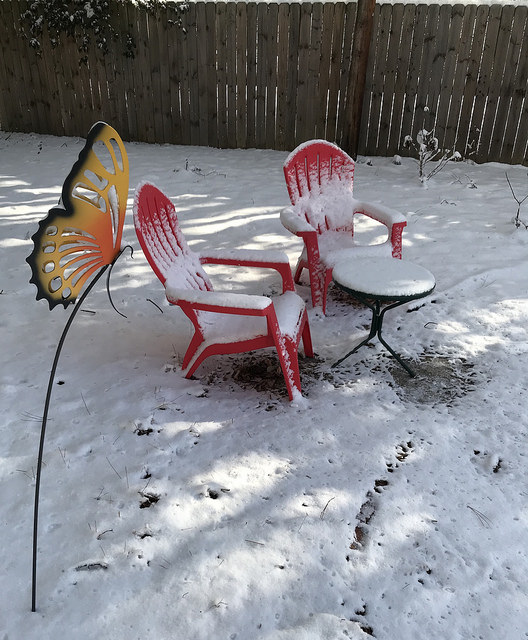 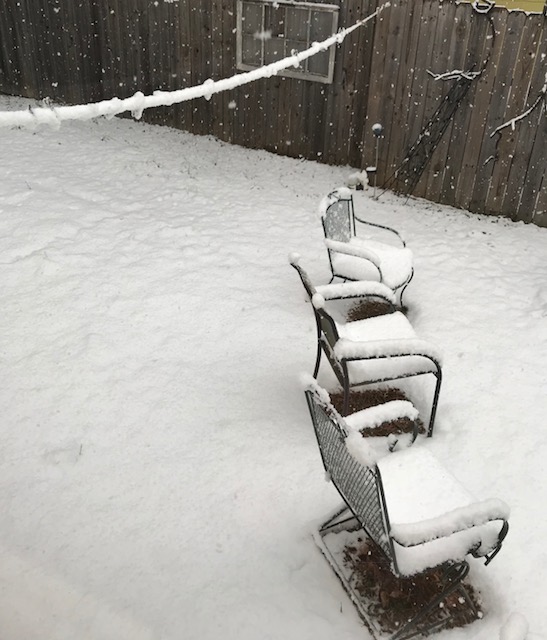 The curtain is falling 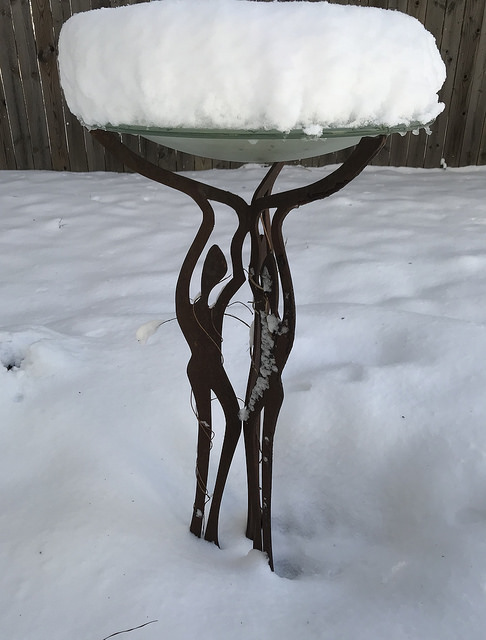 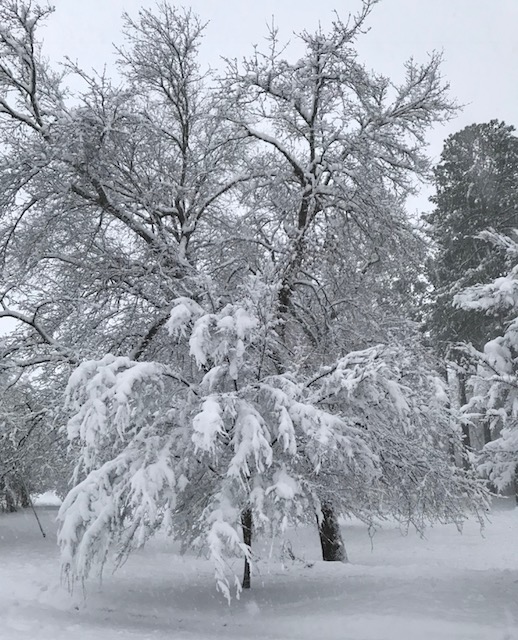 In search of their sled 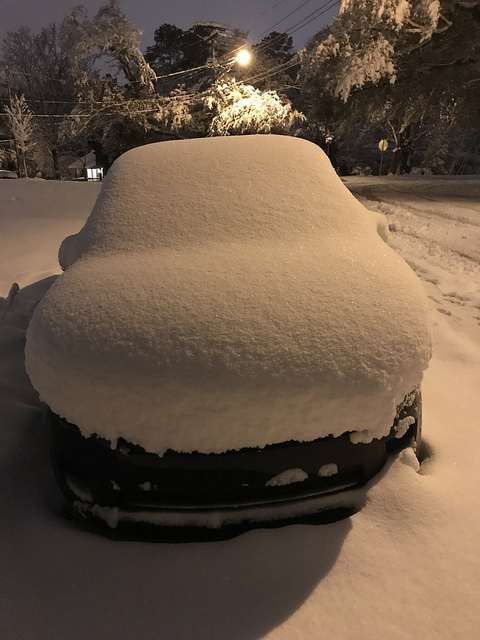 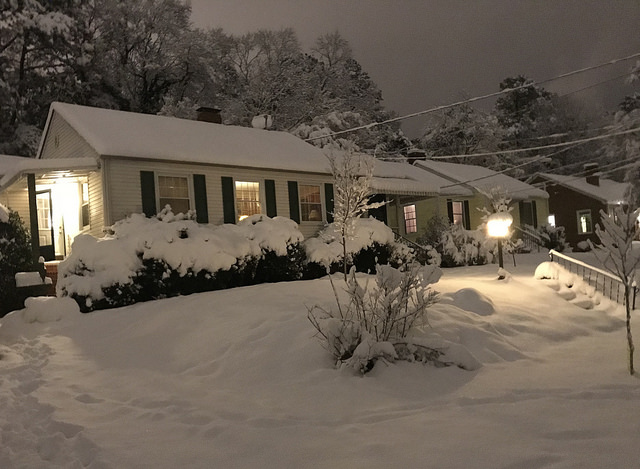 Night comes to the frozen village 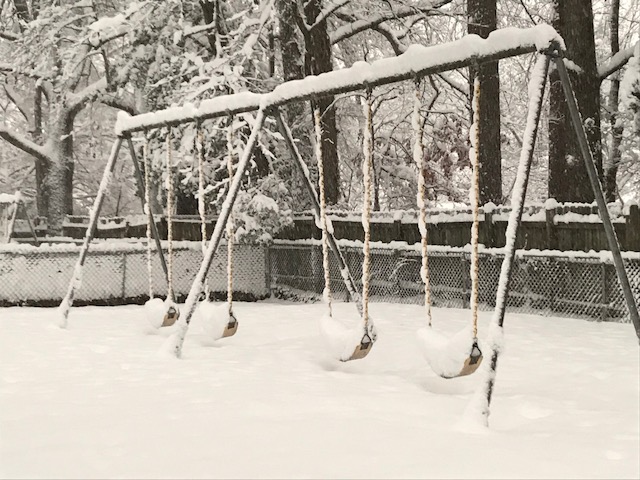 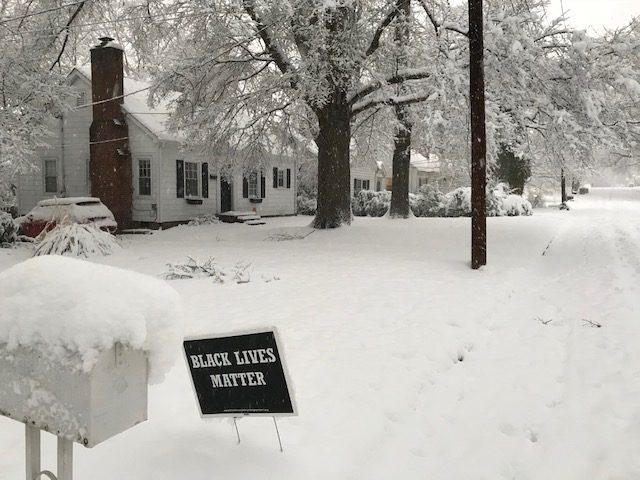 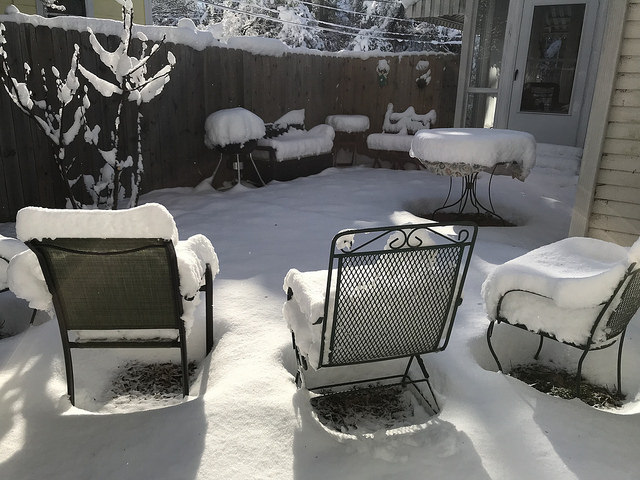 Thawing before the second act 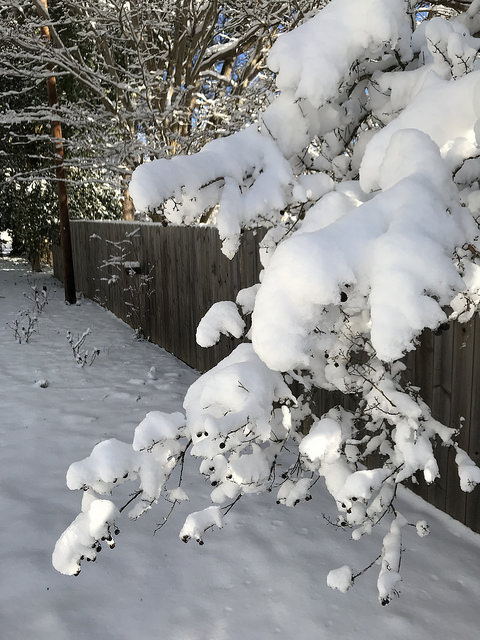 And finally, a purity of joy: my dog Shenzi, experiencing being let off leash on her first snow at the advanced age of some 77 people years, putting plentiful boogie into a freewheeling 20 seconds of woogie…Enjoy!

All other winter photos by Andrew Hidas, see more at: https://www.flickr.com/photos/andrewhidas/