A year or two ago, I came across a passage, its source now slipped through the holes in my memory, in which the writer was talking about his grandfather who had received a terminal medical diagnosis and was forced to leave his home. The grandfather had been on the land his whole life, I think in Italy, with all that such long, deep immersion implies. The afternoon they were leaving, the writer watched from inside the house as his grandfather walked slowly around to each tree on his property, weeping and saying good-bye. “How can you witness something like that and not be affected by it?” the writer asked. 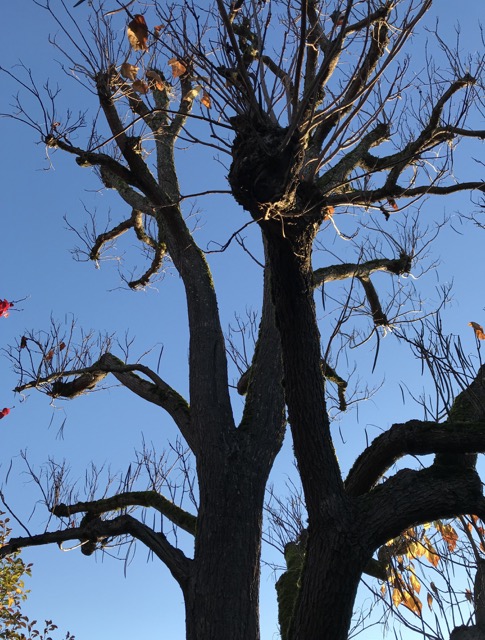 The catalpa tree whose progeny I transplanted to my backyard and wrote about last summer had its own terminal diagnosis back then, but its time left towering above the plot of earth it shared with me here turned out to be dramatically less than I had figured. I’d hoped for two or more years out of it, but a subsequent visit by an arborist friend convinced me that a long lingering death would serve no good purpose.

The chance of the tree blowing over in a strong windstorm, perhaps crushing my house or a car or person, was significant, my friend said. So my long beloved catalpa (probably 50-60 years old, the last 22 with me) had become too dangerous to go on living, and yesterday was its appointed day. 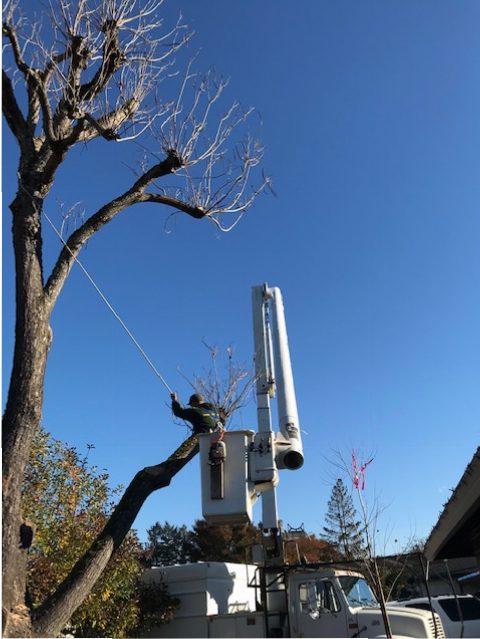 “I knew a parson who frightened his congregation terribly by telling them that the second coming was very imminent indeed, but they were much consoled when they found that he was planting trees in his garden.”
—From Bertrand Russell’s “Why I Am Not A Christian” (1927) 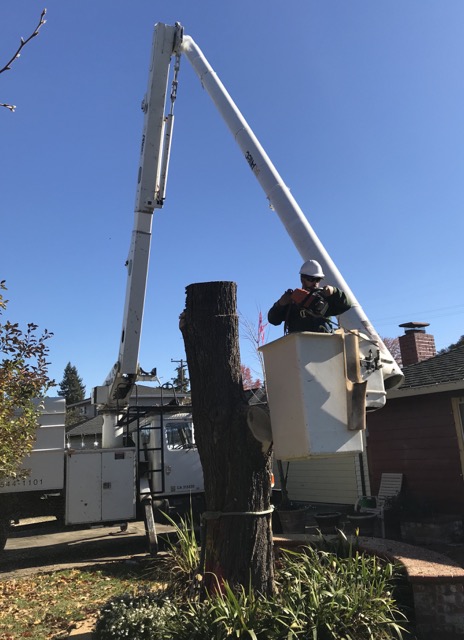 I’d been sad every time I thought of the tree since it received its diagnosis. And that meant sadness dogged me these past months, because the tree so dominated the landscape, drawing attention to itself with its thick craggy bark and large felt-like leaves, golden in fall with rusted edges as the season deepened.

One could not approach the property nor look out from within the house and miss its towering, imperial presence. Protector, comforter, shade giver, paragon of stability.

It was hard to imagine my life here without it, or how its demise would change the nature of the property, its light, its shade, its entire aesthetic. But I knew it would be different, and I don’t always like different. Who does?

Resistance to change is both the foundation of ritual and the bane of renewal. I will most of the time sacrifice the potential of the latter for the security of the former.

But when something dies—a beloved parent or mentor or brother, a marriage—one is forced to disengage from the kind of safety harness the crew was careful to wear this morning when settling into the tree crevices with their chainsaws.

One finds oneself out on a limb, unharnessed.

If I had my druthers, I would have walked up to this tree in particular on the day I was to die or be forced from my home, weeping and saying good-bye. Just months ago, I would have been shocked to learn I would outlive it. 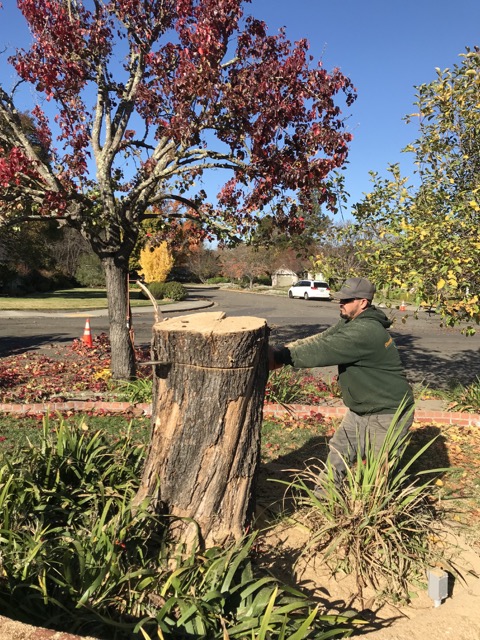 ***
“I went to the springs while the sun was still up, and sitting on a rocky outcrop above the cave mouth I watched the light grow reddish across the misty pools, and listened to the troubled voice of the water. After a while I moved farther up the hill, where I could hear birds singing near and far in the silence of the trees. The presence of the trees was very strong…The big oaks stood so many, so massive in their other life, in their deep, rooted silence: the awe of them came on me, the religion.”
―From Ursula K. Le Guin’s “Lavinia” (2009) 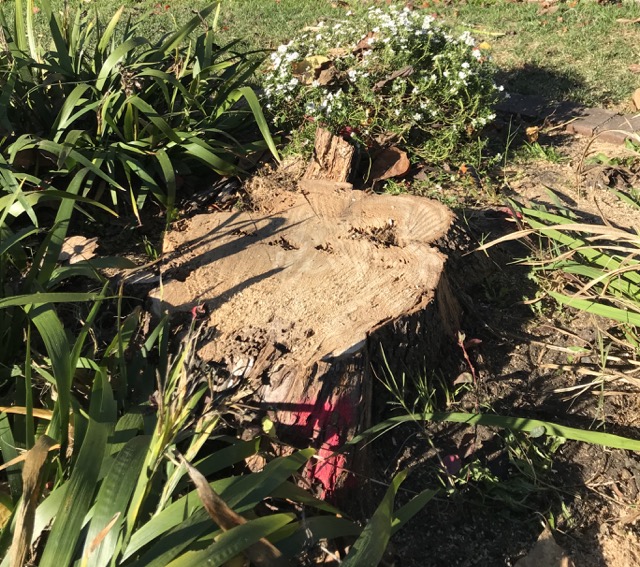 All things pass, and something always rises in their stead. Sometimes the new thing repeats or enhances upon what was there before, like a mountain meadow in spring with more bursting flowers than the year past, and young trees poised to resume their ascent toward ever more light.

But weeds also happen, as do the suckers growing in all their pathos out of dead trees, straining in a hapless quest for resurrection.

It is our privilege?…opportunity?…right? to direct nature in the domains of our property by putting trees to rest before their purely natural time—and to plant new ones, if we so choose, to rise from the still living soil left behind.

A couple of months ago, I walked the paths along a couple of local tree farms, considering a replacement for the ailing catalpa. In one context, this could be considered like going online for a new spouse while the current one is down the hall dying from cancer, but as I think about that, it suggests to me the limitations of simile and metaphor.

I love my trees, loved this one in particular, its grandeur and rich seasonality being as pronounced as they were. I felt every bit its inherent “religion” that Ms. Le Guin alludes to above. But that love is not the one I feel for persons, persons being so much more risky and unpredictable and flawed and emotive and tender and heart-encroaching as they are.

But I knew this, too: I did not want to bid the five-person crew good-bye upon their departure while they left behind a stump or hole in the ground that they covered over with soil and a few stray leaves.

So a few weeks ago, I had the tree farm deliver a “red maple October glory,” about a 13-footer, far more expensive than a sapling, but at my age, I did not feel it sensible to wait decades for the replacement tree to reach maturity. The hourglass may be slow (let us hope), but it is relentless.

I had the maple placed just off to the side of the catalpa in its pot, waiting in the wings, an understudy, dwarfed and in the shadow, for the moment, of its stately elder. But its time was coming. 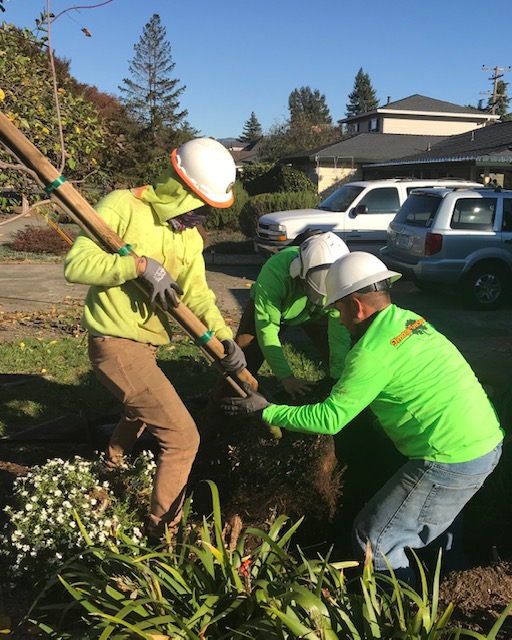 In with the new…

The trees are coming into leaf
Like something almost being said;
The recent buds relax and spread,
Their greenness is a kind of grief.

Is it that they are born again
And we grow old?
No, they die too,
Their yearly trick of looking new
Is written down in rings of grain.

Yet still the unresting castles thresh
In fullgrown thickness every May.
Last year is dead, they seem to say,
Begin afresh, afresh, afresh.

I was surprised, as the day developed, that I didn’t feel more grief as the chainsaws decimated my beloved and tossed it, chunk by chunk, into the dreadful, earth-pounding chipper. Perhaps the long run-up and emotional processing of these months had allowed for that work to be done, and I was at peace, my grief mixed with fascination for the machinery and efficient manpower of the work crew, along with anticipation of what awaited in a fresh planting of the maple.

It was a restless day, not much given to my day job. I couldn’t stop looking out the kitchen windows at the scene, couldn’t stop drifting outside to take pictures of all this bustle, all these resources, this planning, this money and devotion and professional acumen in the service of a lone tree’s death and its purposeful replacement.

What curious creatures we humans are, doing all that we do among and to the creatures and flora with whom we share this earth.

When the last chunk had been chipped, the last leaf blown into a pile and placed into the truck that contained the ground-up pieces of the tree that was not a tree anymore, the trucks drove off, a good day’s work done.

Alone in silence at last, I gazed upon my newly planted partner on “my” property (ha ha), walking around it, taking its measure from multiple angles, trying to imagine the changed circumstance it would bring, the different configurations of shade and dampness and bird life and sunshine it would beget in what I hope will be the long arc of its life.

In years past, I had indulged an ever more, shall we say, enthusiastic practice of lighting up the front yard with Christmas lights, which came to include, in recent years, wrapping strings of lights around the thick trunk of the catalpa. It was an annual ritual I relished through years of family life, the doings of a long, usually cold Thanksgiving weekend.

I’d held off on wrapping trees this year, given the work that was to take place not just on removing the catalpa, but in pruning all its neighboring friends. But as I walked around the front yard in the late afternoon, which felt curiously fresh as spring given the bright sunny day, a newly planted tree and the abundant light surrounding it, I had an inspiration.

I would wrap this baby, in its entire maybe two-inch circumference, in tiny lights, around and around in all its youthful glory, partly as homage to what was, the rest as hope for what will be. 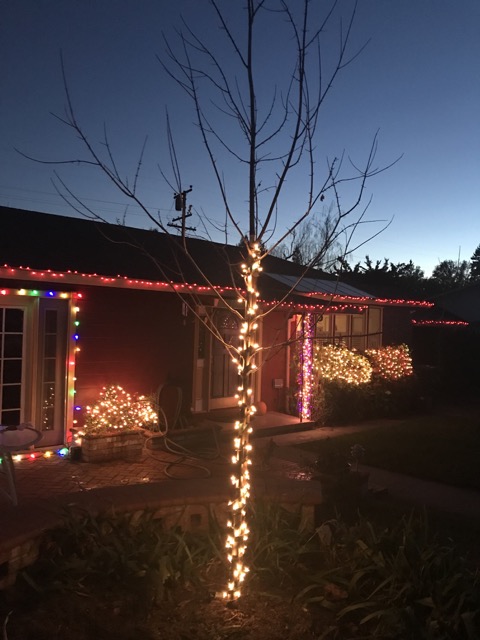 10 comments to Good-bye to a Tree