Hark! Get Thee to Joel Coen’s “The Tragedy of Macbeth” !!

For the average person born and brewed in everyday contemporary English, reading Shakespeare is no walk in the park. Despite his essentially one-name status reflecting a worldwide reputation as a playwright and poet barely this side of a god, Shakespeare goes either under- or unread by the vast majority of people largely because of his arcane, at-first-glance impenetrable prose, which can be a challenge for even the most learned readers.

The Irish critic Fintan O’Toole captured this truth with his usual panache in his slim-but-packed 2002 volume, “Shakespeare Is Hard, But So Is Life: A Radical Guide to Shakespearean Tragedy.”

Recapitulating his “Shakespeare Is Hard…” title in the text, O’Toole goes on to add “So long as you can see that there is a lot of life in Shakespeare, then the effort begins to make sense.”

Castle hallways are long, empty, and mournfully shadowed, every inch lifeless gray mortar, through which Macbeth and his Lady move almost as ghosts, alone and imprisoned by self-inflicted torments.

Enter the film director Joel Coen, for whom seeing “that there is a lot of life in Shakespeare” would be a colossal understatement. Coen, in a rare solo venture unpaired from his brother and longtime creative partner Ethan, has turned that “seeing” into an adaptation of the master’s early 17th century play “Macbeth,” his treatment standing very much on its own as a ground-breaking accomplishment, a work of film art for the ages.

After its debut last September at the New York Film Festival, the film was released to movie theaters on Christmas Day and on Apple TV just last week.

One way or other, ancient tragedy fan or not, you really should hasten to see it. 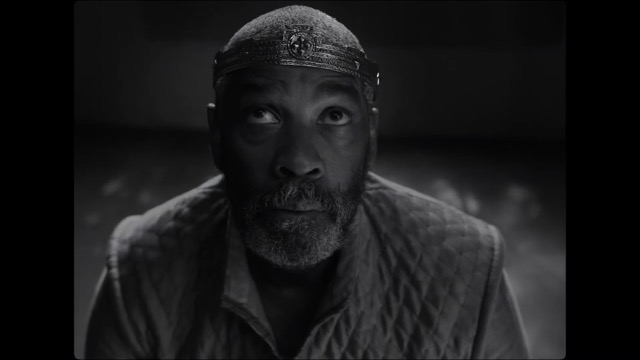 Macbeth is a play of dark moods and heinous murders. Its main protagonists, the brave and battle-tested warrior Macbeth and his wife (played superbly here by Denzel Washington and Frances McDormand), plot to kill the kindly King Duncan, who has just awarded Macbeth the noble Scottish title “Thane of Cawdor,” in recognition of his recent military conquests.

The honor affirms the prophecy of three witches (a star turn by the remarkable stage actress Kathryn Hunter) whom Macbeth and his fellow general and bestie Banquo had encountered on the journey home from war.

The witches also prophesy an even juicier future, though: that Macbeth, his wife now beyond child-bearing years (Shakespeare suggests she may have miscarried or lost a son in infancy, but leaves it intentionally vague), will one day serve as king.

Also: multiple of Banquo’s descendants will do the same.

Macbeth interprets the prophecy about his kingship as a prompt, with considerable encouragement from Lady Macbeth, to do away with Duncan, given that the king has also declared his eldest son Malcolm the heir apparent, which would seem to block Macbeth’s path to the throne.

And soon thereafter, the couple’s rapidly twisting logic dictates that they eliminate Banquo, his young son, and a host of others as well.

Predictably in the Shakespearean realm of tragedy, everything almost immediately starts going to hell. 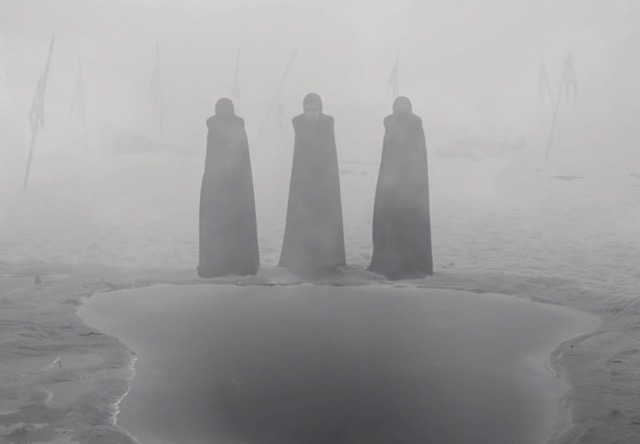 Most film adaptations of literary works leave those who have read and bathed in the original uttering a familiar sentiment: “It just doesn’t compare with the book.” Coen has an additional competitor in that “Macbeth” has been performed no doubt thousands of times on stage to millions of audience members since its premiere in 1606.

And as much power as those media project, Coen has capitalized on the now outsized storytelling advantages of modern digital technology, lighting and set design to produce a work so stunningly original that it may just create a whole new wave of Shakespeare enthusiasts (we can only hope…) who flock to subsequently produced works rendered newly accessible after their initial 500+ year run through the culture.

He does so partly by creating a minimalist, stark and menacing set that almost drips with troublesome portent, heavy as the fog that often envelops the barren landscapes and halls where evil plans are hatched—and under which Macbeth and his Lady steadily and chillingly devolve. 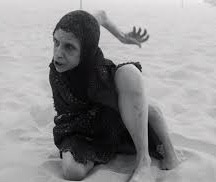 Almost every scene reflects and suggests the standard, inherent  limitations of a live theater presentation with its constrained stage, made all the more so by Coen’s decision to do away with nearly all of life’s typical adornments. Furniture, art, kitchen, human banter and ease, even food and drink—either wholly absent or nearly so.

Castle hallways are long, empty and mournfully shadowed, every inch gray lifeless mortar, through which Macbeth and his Lady move almost as ghosts, alone and imprisoned by self-inflicted torments.

Landscapes are mostly limited to barren roads bathed in fog, a dead and deformed tree and wreck of a former hut the only suggestions that something living once passed here.

All of it hypnotic and mesmerizing from first scene till last, viewers irresistibly snapping to attention as the dark-robed witches set the action moving with skin-crawling intonations, after which the doomed lovers prowl their castle halls, first under the weight of their rapidly evolved evil plans and then their consequences, which will live forever, and in infamy.

I have freely shared basic plot points here both because the major plays (Macbeth, Hamlet, King Lear, Othello) are so well known and because knowing the outlines of the story is in any case almost secondary to watching, listening to, and reading how the story unfolds.

Tragedy, after all, leads to only one basic end, and it is never good.

Shakespeare’s immense and original genius is in concocting the tale of Macbeth and then cloaking it in almost impossibly rich prose and character portraits that reward attentive readers with untold treasures.

Coen’s genius is in adding atmospherics that take us—along with our viscera—deep into a both enchanting and horrifying land, where we absorb the tale in a true altered state of consciousness, no chemical enhancement required. Only the power of a story whose visuals and acting command our attention in a way we have not experienced before in this now well-trod medium of film.

What it also did is send me back to the text for the first time in decades, rebaptized into the peculiar Elizabethan language that, like all complex poetry, often doesn’t reveal itself with a first pass. Linger just a while, though, and the text comes alive, leaving one newly appreciative for what creativity in language can achieve.

Early in the play, as Macbeth and Banquo move on toward home from their witchly encounter, Banquo asks:

“Were such things here as we do speak about?
Or have we eaten on the insane root
That takes the reason prisoner?”

For this pair of fast friends soon going to ruin, the question serves as a last possible offramp, an out-loud wondering whether an exit to reason and sobriety may yet prove the better course over the phantasmagoria they have just beheld.

But it is not to be.

As in most tragedy, including the sometimes colossal missteps of our own lives, reason proves helpless, unable to break the tightly wound, serpent-like bonds of ambition and avarice, desire and delusion that make for the great dramas of every life and time—and such robust material for creative artists.

Teaser to a visual feast…

All photos screen shots from the film

6 comments to Hark! Get Thee to Joel Coen’s “The Tragedy of Macbeth” !!