In Defense of Gawkers and Looky-Loos 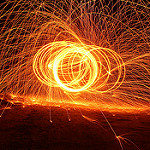 Local news reports here in Sonoma County tell us that many people who lost their homes to the October fires are upset that the fire tourist “looky-loos” now descending on the rubble of their streets are adding further insult to the grievous injury they have already suffered. This is an understandable response, and I feel for them.

But it seems to me there is much more to this phenomenon than mere voyeurism, so I would like to offer another perspective.

I do so as someone who did not lose his own home but, like most all residents of this area, know many friends and acquaintances who did. And who, like everyone connected emotionally to this beloved landscape and community, shares in the grief of so much loss.

Within the collective trauma, each person, in the privacy of their own fears and anguish, still has to reckon with their sense of loss, still has to make peace with the images now seared into memory of their world on fire, of flames licking at and then overcoming so many sites that they had held dear.

I got up to the hilltop Fountaingrove neighborhood for the first time last Saturday, about sunset. I did so with a kind of fear and trembling, not wanting to be obviously craning my neck nor feasting with morbid curiosity on the pain of others. I would be taking no grinning selfies amidst the ruins.

But I did feel a strong desire and emotional need to see and breathe in the actual, material, right-there-in-front-of-me extent of the devastation. I had to view it in real time, with all my senses, to bring the enormity of the loss into full perspective.

And like everyone else who was touched by this event, I had my own grieving to do. 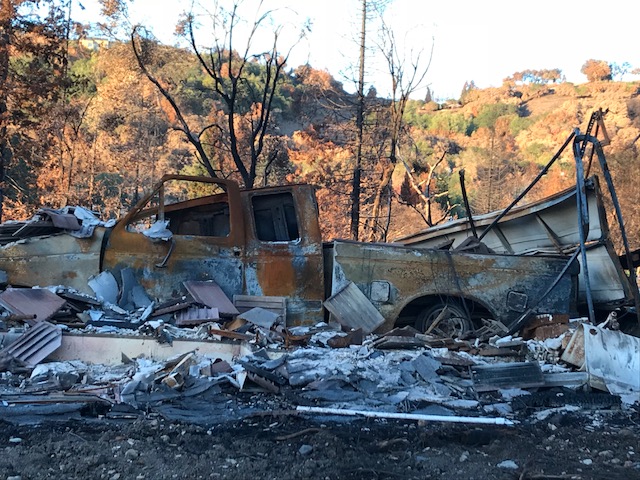 I was a Hospice volunteer for many years and have attended, at this age, the deaths of more friends and loved ones than I can any longer count. And though every person’s death sends ripples through their own community of family, friends and neighbors, those deaths still largely beget grief on an individualized scale.

The fires, however, were my first personal experience of community grief, of widespread trauma affecting an entire population. It went unnoticed by approximately no one that the fires were virtually all anyone talked about for weeks on end, particularly with those one hadn’t been in touch with during the catastrophe.

Yet within the collective trauma, each person, in the privacy of their own fears and anguish, still has to reckon with their sense of loss, still has to make peace with the images now seared into memory of their world on fire, of flames licking at and then overcoming so many sites that they had held dear.

I drove slowly through the side streets off Fountaingrove Parkway, beholding entire blocks leveled as though by bombs. It’s notable how little difference there is in areas devastated by fire. Nuclear bombs or wildfires, it’s the same ash to ash, making a mockery of all our pretensions to permanence. The world becomes rubble and remnant of the grandeur that once was.

Cruising slowly and seeing nary a looky-loo nor residents of the spared homes, I went in search of the house, or what is now merely the “property,” of my friends Mary and Steve. I had been in their home multiple times, sat eating, drinking and attending meetings in that living room, dining room, and deck. Their home had always been a welcoming one, well lived-in and friendly.

Part of me didn’t want to face what had become of it—and another part needed to.

Despite my familiarity with the home, I passed by the property twice, so disorienting was the specter of streets where fire had hopscotched cruelly, leaving some homes intact while turning the home next door to cinder.

Finally, I resorted to searching for the painted house number on the curb, found it and parked. I got out and stood there immobile, for a long time, my eyes scanning left and right, my mind trying to piece together what had been where, my heart heavy for my friends’ loss. 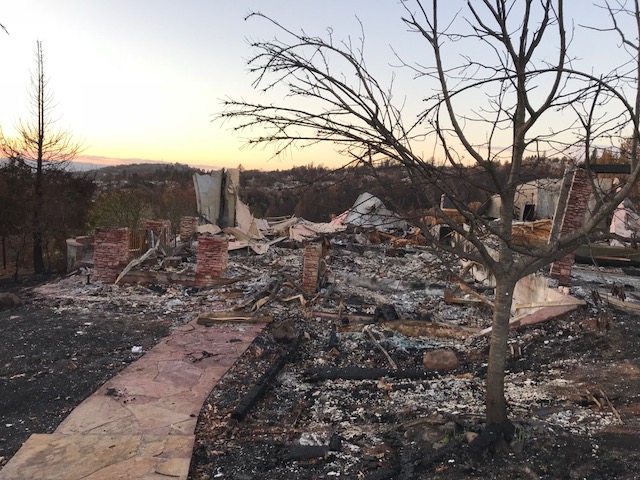 The home had felt so spacious and open in its time, but now, with but a few beams and pillars hanging at crooked angles, it looked surprisingly small, stunted, forlorn. As if it had been left to fight on its own after the humans had fled to safety, and not been up to the task.

Neither God nor blind luck nor firefighters could save this once stalwart repository of so much precious human experience. It was gone with the wind and the flames.

I couldn’t help marveling at the merciless damage the fire had wrought. The whole scene made me feel just as small and humbled as Mary and Steve’s home had felt to me. Not unlike, in a different context, beholding the grandeur of an old European cathedral or an all-powerful natural setting like Yosemite Valley.

One always feels insignificant in such milieus, leading to feelings of awe and, ultimately, submission to powers greater than oneself. All of which is at the very root of religious sensibility.

Sure, there’s crass, “Here we are at the fire making funny faces!” looky-looism. But ultimately, that’s the unthinking version of a universal pull to behold scenes of a kind of sacred power, and our pilgrimages to such sites are rarely, at base, to revel in others’ misery.

Rather, they invite us to pay homage, to come to terms with the awe-full power of the cosmos, and to feel whatever solidarity and comfort we can draw from beholding and sharing our experience with one another in an often pitiless world.

Light image near top of page by YangTS.

8 comments to In Defense of Gawkers and Looky-Loos