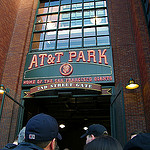 Sing-songy, every person with wide boisterous grins, and every one of the chants begun and sustained by young and loud men, carpe dieming like mad, feeling it.

And then it switches:

Rolling like thunder goes the mass of humanity with its full-throated chant. It goes for a good 10 minutes down a slope that no ski run could ever match for its platform of pure joy and satisfaction.

What is it about sports that inspires such near manic, religious fervor, with expressions of mass exaltation exceeding anything that happens in even the most rollicking church? At the end of some sporting matches, thousands pour spontaneously into the streets of the city, there to hug strangers and soar with the spirit of life as if it were the end of a world war.

Modern life, with its sprawling porchless homes, entrances and exits via enclosed garages, and now endless self-amusement staring into the 2” by 4” rectangle of our smartphones, seems to do its diabolical best to disprove John Donne’s assertion that “No man is an island.”

There is really no doubt anymore that sports has many trappings of religion, its devotees consulting the scriptures of its box scores and websites, engaging in endless reflections and speculations in the newspapers, blogs, Facebook groups and sports talk shows, then gathering at the stadium or in front of their televisions and radios for the services. Fans spend big money on tickets but more, in many cases, on the clothes—jackets, jerseys, shirts, hats—that are de rigueur on game day, like a choir carefully donning its robes.

Many of us wear these players’ $100+ jerseys or less costly T-shirts, their names and star power on the back standing in for our own, our identification with them complete. When is the last time you saw clothing with “Pope Francis” or “St. John of the Cross” emblazoned across the back?

Actually, besides the near ubiquitous sports jerseys, one also sees more Einstein and Thoreau T-shirts these days than ones with Jesus’s face, but that may be just a function of my living in northern California, hard to know. 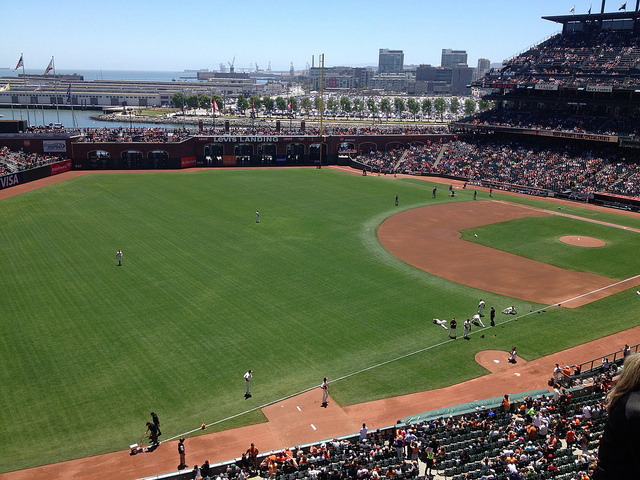 What we do know is that religion has been in decline for at least 500 years for all the reasons we have discussed here before, but that humankind cannot live by rationality, science, and commerce alone. Our need for ecstasy, wonder, awe, ritual and community is as urgent as it ever was, though modern life, with its sprawling porchless homes, entrances and exits via enclosed garages, and now endless self-amusement staring into the 2” by 4” rectangle of our smartphones, seems to do its diabolical best to disprove John Donne’s assertion that “No man is an island.”

Sports, though, is a readily available and inviting substitute for much—though not all, more on that below—that we miss from the decline of religion.

On the social end, we make elaborate plans to go to games with friends and loved ones with whom we eat and imbibe before, during and/or after the event. We gather there with thousands of strangers in common cause, focused in our devotion, bursting with desire to unleash our expressions of worship and communal bliss.

On these scores, it is difficult to make the case that sports do not fill essentially religious functions. All the intense subjective emotional qualities of religion are there, including, most emphatically, giving yourself to a cause larger than you are, transcending your everyday consciousness, and nurturing hope for your team to vanquish the opposition, overcome all obstacles and emerge triumphant, saved, champions of the world and redeemed of all past failings, their names and exploits immortalized on plaques, in books and individual memories and halls of fame.

But there’s another critical aspect of religion that sports is less successful at replicating. For all the communal enthusiasms that sports engenders, it in no way matches the functions and rewards of religious community. 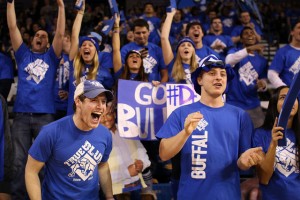 Sure, we don our orange and black and parade down the walkway with beaming compatriots, chanting with glee and devoted to all things “Giants,” but beyond our immediate companions with whom we’ve come to the game, I don’t know anything about these people caught up with me in this rolling mass of humanity. It’s an ad hoc grouping around a particular slice of entertainment life; I’m here today and gone tomorrow with all of them, knowing them not one minute after departure from the gate where the last chant dies away.

I will not gather with them all again tomorrow or next Sunday, not ask after their kids, not hear about their ill spouse or dying brother for whom I will “hold a good thought” in the coming week, not lay out cookies and coffee for them after next Sunday’s game, not meet with them and other parents for a series of circle dinners during which we break bread and drink wine and share intimately of the challenges all of us face raising teenagers.

I will not listen with them, spellbound, when a real choir performs a liturgical chant that plumbs the dark mysterious depths of the human heart rather than the fleeting feel-goods of “Let’s go Giiiiants!”

The paradox (well, just one of the paradoxes) of the religious quest is that however much its roots spring from individual longings and glimmers of transcendence, of the delicious, soul-satisfying oneness to be found in nature, contemplation and solitude, its true flowering happens in community, in relationships where we are but a small part of a larger whole.

And in longing to be part of that whole, it turns out that we’re natural huddlers, just as most creatures are. As much as we might enjoy parties, street and restaurant gatherings, we mostly like to huddle with our familiars, our homeys, those who know and love and accept us as we are.

The intimacy of religious community—of the intention to pursue shared values, with people one commits to not for an afternoon of rooting for the home team but for a lifetime of doing the work of kindness, compassion, service and soul—gives the lie to any notion that sports is a viable, life-affirming substitute for religion. That it serves functions similar to religion in certain contexts seems beyond dispute, but that’s a long way from proclaiming the establishment of The Church of the San Francisco Giants in anything but the most whimsical, tongue-in-cheek manner.

Turns out that just as sports is like life in certain fundamental ways (requiring virtues of teamwork, struggle, self-sacrifice, persistence, tenacity, etc.),  sports is also like religion in other ways.

But sports isn’t life—it’s the toy department of life. And sports isn’t religion either. It’s just a fun venue in which to share some of its more superficial rewards.
***
Talk about ritual—how about singing lustily along with “Take Me Out to the Ballgame” in the middle of the 7th? I wouldn’t consider a baseball game complete without it.