Noah: The Movie, the Fable, and the Issue of Belief 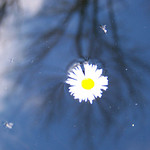 I’d like it known that I read the book first.

Which, as all literarily inclined people know, is the right and proper order of things in a modern media age when Hollywood regularly absconds with your favorite tales and more often than not turns them into something  shallow and alien. This inevitably causes you to exhort those who reversed the natural order of things by walking in blind to see the movie: “Oh, you just have to read the book!”

In the case of Noah and its film iteration from director Darren Aronofsky and Paramount Studios, we have the good fortune that most everyone grows up at least hearing about this strange tale involving a very ticked-off God telling his obedient servant to build a humongous ark that will literally save the last living things on the planet.

Still, it had been a while since I visited the real story, which, for all its epic grandeur, plays out in a compact 2,300 words in Genesis 6-9. (Hmmm…how might War and Peace have fared with the editor of Genesis?)

There seems to be a kind of inevitability to dustups regarding religious movies. On one side are the heathens of Hollywood (Aronofsky is an avowed atheist) treading on ground that a certain kind of religious person on the other side considers hallowed and off-limits to all but the devout. On one level, I am glad to see people take their stories seriously, seeing fit to object when their favorites have been mangled and rendered ridiculous. On another level, as I come across multiple Christian voices tossing off the word “blasphemy” in describing the film, I feel a chill in my bones, given that word’s horrific applications in history. 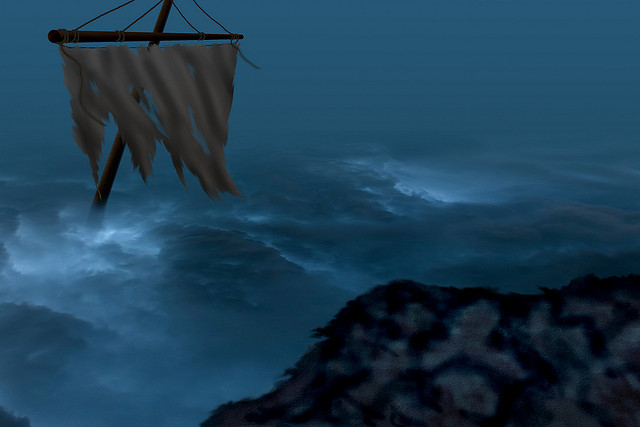 Aronofsky, for his part, has been getting it from both the left and the right, which is usually an encouraging sign for an adventurous, boundary-stretching artist. Even before the film’s release, Christian media groups were leaning heavily on him and his money people to either tone down the pure add-ons that appear nowhere in Genesis (Noah and his brood were hippie vegetarian enviros?), or else add a disclaimer to the effect of, “Uh, we took a few liberties with this story, but didn’t mean to offend all you believers, honest!”

After protracted negotiations, here’s what happened in rough sequence:

• The filmmakers settled on the disclaimer.
• Secular watchdogs scoffed at their capitulation.
• At least one influential Christian media group conferred its imprimatur…
• …Thus paving the way for the lucrative Christian movie-going market to help finance the next heathen entertainment.
• The movie scored some $44 million in opening weekend receipts.

Religious literalists cleave to their belief that sacred scriptures represent a history of a people rather than a potholed road map of a people’s heart.

If you’re viewing religion from afar, the specter of a movie fable adding a disclaimer that it is taking liberties with a literary fable might strike you as odd. After all, experimental theater companies setting Hamlet on a different throne as a Port Authority director in Cleveland rarely offer apologies for their transgression, but are instead saluted for their creative daring-do. But this is to dismiss or simply not understand the ferocity with which religious literalists cleave to their belief that sacred scriptures represent a history of a people rather than a potholed road map of a people’s heart.

The New Yorker writer Malcolm Gladwell recently returned readers to the scene of perhaps the most star-crossed of all clashes between literal believers and secularists, when David Koresh and his Branch Davidians squared off against the F.B.I. in Waco, Texas in 1993. Gladwell notes the tragic disconnect between the F.B.I. negotiators who assumed they were dealing with a rational party willing to horse-trade various negotiating points such as letting a few children from the compound out to the F.B.I.’s waiting arms in exchange for food for all those who remained.

Gladwell portrays FBI negotiators largely as hapless because they couldn’t relate to, couldn’t conceive of, anyone who takes religious belief so seriously that the mere word “negotiation” strikes them as a ridiculous and insulting joke.

Negotiate away the Word of God? Exchange our children of God for food?

This failure to understand religious sensibility also affects contemporary debates between believers and a cabal of so-called “new atheists” such as Richard Dawkins, Sam Harris and Daniel Dennett.  So stupefied are these men by what they regard as the delusions of religion that they can’t restrain themselves from sneering dismissively at all who profess belief. Complicating this matter is that many such believers happen to possess advanced degrees and are occupied as hard-boiled scientists on the six days of the week when they aren’t in church.

Critics such as the new atheists violate what I consider to be a cardinal rule, or let me call it the “Hidas Rule,” of effective advocacy:

No one in the entire history of the world has ever changed their mind about anything because they were told how stupid they are for believing as they do.

But still: What are we to make of otherwise rational thinkers who hold fast to belief in the literal reality of arks sailing ancient seas with the world’s biggest zoo on board? One website maintained by a group of believing scientists (http://www.answersingenesis.org/) reflects anything but collective idiocy, yet they lay out a breezily confident case for how Noah could easily have managed the building of his ark and the voyage with his offbeat cargo. And how that was all in the early days of earth, since said earth is only 6,000 to 12,000 years old. 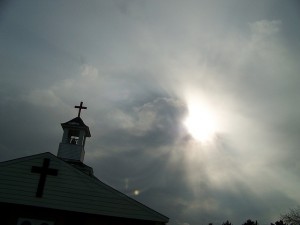 I am going to lean here on a towering figure in the history of religious thought: psychologist, philosopher and free-range thinker William James (one-half of perhaps the world’s greatest brotherly tag team with the novelist Henry). Though he had more than a bit of the mystic about him, James was of the “Pragmatist School” that nodded approvingly at all those aspects and adaptations of human life that roughly merit the phrase, “Whatever works…”

“Is what you’re doing and believing in functional? Settling your mind, calming your soul, offering you solace through the long dark night without hurting anyone? Good—do it some more.” That was James’s basic approach, as in this, from his classic Varieties of Religious Experience:

If believing as though we have free will, or as if God exists, gets us the results we want, we will not only come to believe those things; they will be, pragmatically, true.

Mormon religious scholar Robert Millet took his own angle on this pragmatic issue when asked on the public radio show Speaking of Faith a few years ago about the highly dubious (and well-documented) history of Joseph Smith, the founder of his religion, and the effect of that knowledge on Millet’s own faith:

“…I heard a church leader not long ago say this, which is very simple, but it has a profound implication for me. He said, ‘Faith is just so much more than a feeling. Faith is a decision.’ And I think that’s right for me. I made a decision a long time ago about Joseph Smith, fully aware now, maybe more so now as a professor for the last twenty-five years than I ever was as a young person, fully aware that he was a human being, that he made mistakes. But I made a decision back then that Joseph Smith was a prophet of God and that the work he set in motion was divinely inspired and that what I was about was good and that it would bless my life and bless other lives. And…I’m just sort of taking the stance of I, I just will not allow my faith to be held …hostage by what science has or has not discovered at a given moment in time. Does that make sense? That, to me is, it may sound naïve and it may sound weak, but… that’s the faith part of me…”

We here see the power of faith, if willfully enough embraced, to power through all doubt and even evidence that some event or person couldn’t possibly—scientifically and rationally—have happened as it is claimed. “Don’t bother me with the facts,” Millet is essentially saying. “I’ve decided to believe anyway.”

So believers choose to believe, lives are changed, practical good things can come of it all. (As can bad things, too, but why should religion or religious people be impervious to the human foibles that affect everyone else?) 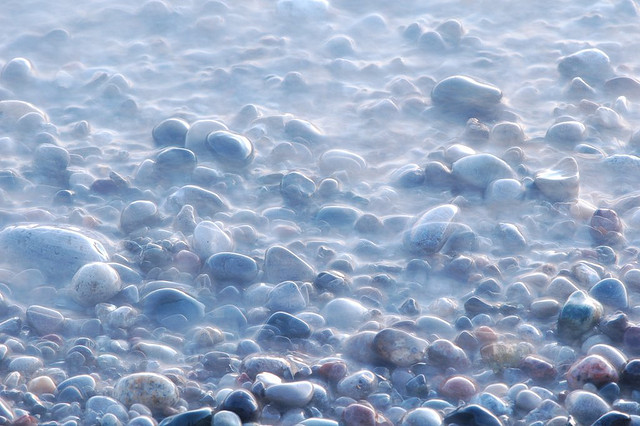 So is there any downside to this fierce clinging to essentially irrational belief?

Certainly when devout literalist believers support oppression of others based on ancient texts from another time, their belief is anything but pragmatic and benign. On virtually every major human rights issue of recent centuries—whether involving race, gender, sexual orientation or religious freedom—literalists of every persuasion have fought bitterly to maintain ancient prejudices.

But beyond even that is the tragedy of essentially devaluing the sweeping power of story and legend to transform lives. By attempting to shoehorn a label of “history” onto fable, the true redemptive power of metaphor is lost. So as we focus on an angry literal God and misbehaving humans in Noah, reducing the story to their and perhaps our own perceived “misbehavior,” we lose the meaning of those times when (metaphor alert!) flood waters are swirling around our own neck, when our world is slipping away, when all we can do is trust and perhaps blindly put one foot in front of the other toward the closest available ship that holds refuge and promise.

So: If Noah and his ark fail dismally as “history,” does that reduce it to “just” a story?

In all places and times, the human condition cries out for story, for light and warning and promise, for instruction and guidance and the sweet whispers of redemption that can come only when we look up and out, when we sit and observe and listen to another person launch in with the forever magical words, “Let me tell you a story…”

Follow this blog’s Facebook page in between posts for daily snippets of wisdom and photography from all over:http://www.facebook.com/TraversingBlog

So very much appreciation and deep bows to the photographers:

Flower on water and church steeple photos by alliessorc,  some rights reserved under Creative Commons licensing, see more at: https://www.flickr.com/photos/alliessorc/

9 comments to Noah: The Movie, the Fable, and the Issue of Belief