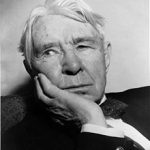 There will always be Billy Sundays among us. Smooth, snake-tongued preachers talking up either the gospel of prosperity that creates prosperity mostly for themselves, or else painting pictures of heavenly hereafters with which their impoverished followers will be rewarded—provided they dig deep for what is in their meagerly endowed pockets to sustain the preacher’s enterprise.

The historical Billy Sunday was the latter, a ragingly successful turn-of-the-20th century evangelist who wowed crowds with theatrical religious oratory that he embellished with long slides across or dives off the stage, stunts that called upon his former career as a major league baseball player with a penchant for stealing bases.

Sunday soothed his listeners and their hollowed out lives with promises of heavenly days everlasting even as he himself became wealthy. As his empire grew, he even began demanding that cities build large pavilions at their own expense in order to accommodate his revivals.

Crafty and calculating, was Billy Sunday, which are adjectives one would not apply to Carl Sandburg’s take-down of him in his 1916 poem, “To a Contemporary Bunkshooter.”

Sandburg, the plain-spoken midwest “people’s poet” who only later eclipsed even Sunday in the era’s cultural landscape, employed a kind of blunt force trauma directed right at the head and heart of the evangelist in this poem, which he originally and unflinchingly titled “To Billy Sunday.” It was only his publishers, wary of libel suits, who prevailed upon him to essentially make up the word “bunkshooter,” not then or now in any official dictionary of the language. It was taken from the word “bunk,” a colloquialism for nonsense or blather, which had emerged from the political intrigues of Buncombe County in Sandburg’s adopted state of North Carolina.

In any case: how blunt was Sandburg in upbraiding nearly everything that Sunday was standing on as the pre-eminent evangelist of his era? You’ll see in the full poem below, but here’s a preview:

You slimy bunkshooter, you put a smut on every human
blossom in reach of your rotten breath belching
about hell-fire and hiccupping about this Man who
lived a clean life in Galilee.

We might see Sandburg as following the lead of Jesus in this poem, straight-talking and pushing his way past the Pharisees for whom he had little time and even less regard. Sunday was a friend to the bankers and industrialists of his day, who backed his enterprise, in Sandburg’s view, as a means of keeping restless natives down and dumb on their wretched pieces of earth. By their overlords’ design, they would never challenge the oppressive forces of cut-throat capitalism that kept them firmly and all too often fervently in place, their lips forming hallelujahs rather than cries of righteousness and rebellion.

You tell poor people they don’t need any more money
on pay day and even if it’s fierce to be out of a job,
Jesus’ll fix that up all right, all right–all they gotta
do is take Jesus the way you say.
I’m telling you Jesus wouldn’t stand for the stuff you’re
handing out. Jesus played it different. The bankers
and lawyers of Jerusalem got their sluggers and
murderers to go after Jesus just because Jesus
wouldn’t play their game. He didn’t sit in with
the big thieves.

Sandburg wasn’t anti-religion himself; he was just anti-sham religion, of the kind that told the poor to be content with their lot. He was a confirmed socialist who had gone to a Universalist college, having developed a non-dogmatic religiosity that took the flesh-and-blood Jesus at his word when he railed against the hypocrisies of pharisee/bourgeoisie life. 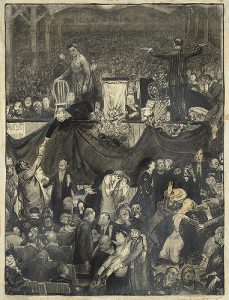 There turned out to be a fair bit of irony in Sandburg’s critique of power and wealth once his career took off after winning the 1919 Pulitzer Prize for Poetry for his volume, “Cornhuskers.” By the time he won a second Pulitzer in 1940, this one for the final four volumes (“The War Years”) of his monumental six-volume biography of Abraham Lincoln, he was not only a household word and icon of America, but was also wealthy beyond measure, having carefully cultivated a poet-musician-speaker career that saw him as comfortable and secure as any Pharisee dared dream. One prominent New York columnist of the time referred to him derisively as “the proletarian millionaire.”

Yet no hint of scandal or undue avarice attends to Sandburg’s life. He married his wife, Lilian Steichen, a year after meeting her at the Social Democratic Party headquarters in 1907, and stayed with her the remaining 60 years of his life. Two brief hints of their union: they instructed the officiant of their wedding to leave the word “obey” out of the traditional litany of vows the wife offers the husband, and she reluctantly decided to wear a wedding ring only in deference to “bourgeoisie morals.”

Lilian bore Sandburg three daughters, the first of whom suffered from epilepsy and the second from brain damage after a car accident. The prospect of supporting both incapacitated daughters through their lives served as a further goad for Sandburg to step on the gas of his income potential.

Ultimately, he died far richer and more famous, with the far larger audience of an adoring American public, than did the subject of his poem. But in its tendentious bombast, “To a Contemporary Bunkshooter” stands as a monumental take-down of an approach to Christianity, the life of Jesus and notions of fairness and income distribution that has no less relevance today than it did in 1916.

“I ask you to come through and show me where you’re/pouring out the blood of your life,” Sandburg asks of Sunday. Reading this scalding poem, it is easy to see specks of Sandburg’s blood poured all over the page.

You come along. . . tearing your shirt. . . yelling about Jesus.
Where do you get that stuff?
What do you know about Jesus?
Jesus had a way of talking soft and outside of a few
bankers and higher-ups among the con men of Jerusalem
everybody liked to have this Jesus around because
he never made any fake passes and everything
he said went and he helped the sick and gave the
people hope.

I’ve read Jesus’ words. I know what he said. You don’t
throw any scare into me. I’ve got your number. I
know how much you know about Jesus.
He never came near clean people or dirty people but
they felt cleaner because he came along. It was your
crowd of bankers and business men and lawyers
hired the sluggers and murderers who put Jesus out
of the running.

I say the same bunch backing you nailed the nails into
the hands of this Jesus of Nazareth. He had lined
up against him the same crooks and strong-arm men
now lined up with you paying your way.

This Jesus was good to look at, smelled good, listened
good. He threw out something fresh and beautiful
from the skin of his body and the touch of his hands
wherever he passed along.

You slimy bunkshooter, you put a smut on every human
blossom in reach of your rotten breath belching
about hell-fire and hiccupping about this Man who
lived a clean life in Galilee.

When are you going to quit making the carpenters build
emergency hospitals for women and girls driven
crazy with wrecked nerves from your gibberish about
Jesus–I put it to you again: Where do you get that
stuff; what do you know about Jesus?

Go ahead and bust all the chairs you want to. Smash
a whole wagon load of furniture at every performance.
Turn sixty somersaults and stand on your
nutty head. If it wasn’t for the way you scare the
women and kids I’d feel sorry for you and pass the hat.
I like to watch a good four-flusher work, but not when
he starts people puking and calling for the doctors.
I like a man that’s got nerve and can pull off a great
original performance, but you–you’re only a bug-
house peddler of second-hand gospel–you’re only
shoving out a phoney imitation of the goods this
Jesus wanted free as air and sunlight.

You tell people living in shanties Jesus is going to fix it
up all right with them by giving them mansions in
the skies after they’re dead and the worms have
eaten ’em.
You tell $6 a week department store girls all they need
is Jesus; you take a steel trust wop, dead without
having lived, gray and shrunken at forty years of
age, and you tell him to look at Jesus on the cross
and he’ll be all right.
You tell poor people they don’t need any more money
on pay day and even if it’s fierce to be out of a job,
Jesus’ll fix that up all right, all right–all they gotta
do is take Jesus the way you say.
I’m telling you Jesus wouldn’t stand for the stuff you’re
handing out. Jesus played it different. The bankers
and lawyers of Jerusalem got their sluggers and
murderers to go after Jesus just because Jesus
wouldn’t play their game. He didn’t sit in with
the big thieves.

I don’t want a lot of gab from a bunkshooter in my religion.
I won’t take my religion from any man who never works
except with his mouth and never cherishes any memory
except the face of the woman on the American
silver dollar.

I ask you to come through and show me where you’re
pouring out the blood of your life.

I’ve been to this suburb of Jerusalem they call Golgotha,
where they nailed Him, and I know if the story is
straight it was real blood ran from His hands and
the nail-holes, and it was real blood spurted in red
drops where the spear of the Roman soldier rammed
in between the ribs of this Jesus of Nazareth.

Sandburg photo near top of page in the public domain.

“Billy Sunday and the Sawdust Trail” drawing by George Bellows, 1915, courtesy of the Boston Public Library, see more at:  https://www.flickr.com/photos/boston_public_library/