The Body As Tool: A Super Bowl Reflection 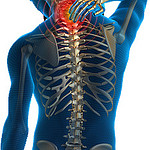 Amidst the hype of our modern day gladiator spectacle known as the Super Bowl, it is hard not to marvel at the fantastic-though-punishing physical feats of the combatants on one of the world’s biggest media stages. These young men strutting about on the field, biceps and triceps jutting out of their short sleeves (in extremely cold weather, that, too, is a display of manly, don’t-mess-with-me bravado), represent the heights of physical accomplishment, of raw talent bolstered by the tireless work ethic and study required to hone it to such rarefied levels.

That said, a kind of darkness hovers over them as well, both in the ever-looming threat of horrific physical injury suffered on any given play, and in the long-term disability virtually every one of them suffers to some degree in their retirement.

Oh dear…that’s what it was? And it has what potential complications? And a medical doctor was handing it out like candy to extremely competitive young men?

Bad backs and knees and hips and elbows and shoulders are quite the norm among ex-NFL players, and they are probably the fortunate ones compared to those who must also contend with the after-effects of the multiple concussions they suffer through the course of their football playing lives.

And though vastly different in scope, that body-as-tool orientation (use it, abuse it, pay the consequences later…) finds its parallel among all those engaged primarily in physical labor for their livelihood.

Which means probably the vast majority of human beings who have lived throughout history, before hunching over computer desks and laptops became quite the phenomenon it has become in recent years.

Given the sport’s inherent level of violence, football players join perhaps only with boxers and ultimate fighters in the grand sacrifice of their bodies on the altar of the entertainment-cum-religion represented by modern sporting events. 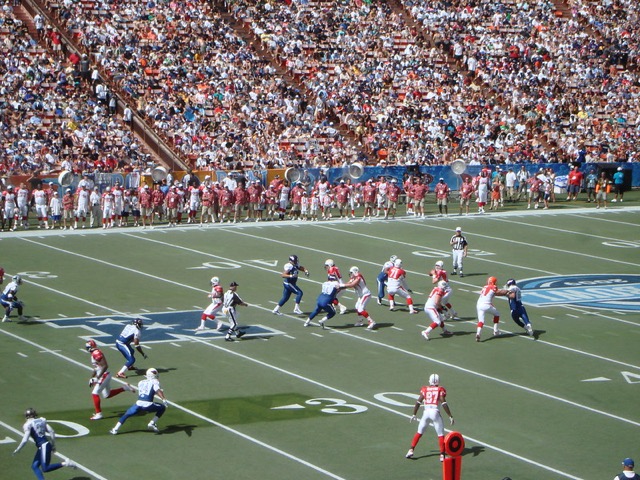 Barbara Kingsolver deftly explored this theme in her 1998 novel, The Poisonwood Bible. The setting there isn’t a sporting field but the Congo, where a fiery Baptist missionary takes his family in an ultimately hapless and tragic quest to bring Christianity to the heathens.

The subjection of the body to relentless and grinding physical toil as a simple fact of existence—the utter normalcy of that—is a prevailing current in the novel. The pastor’s wife Orleanna notes this in responding to her husband’s scorn toward the native population. As recorded by their daughter Ruth May, one of the novel’s multiple narrators, she writes:

Father said: “They are living in darkness. Broken in body and soul, and don’t even know how they could be healed.”

Mama said, “Well, maybe they take a different view of their bodies.”

Father says the body is the temple. But Mama has this certain voice sometimes…

“Well, here in Africa that temple has to do a hateful lot of work in a day!” she said, “Why, Nathan, here they have to use their bodies like we use things at home—like your clothes or your garden tools or something. Where you’re wearing out the knees of your trousers, sir, they just have to go ahead and wear out their knees!…It appears to me their bodies just get worn out, about the same way our wordly goods do.”

And so it is with athletes and construction workers, roofers, hod carriers, and tree cutters, all of whom put their bodies through rigorous daily demands over many years and wind up broken and infirm in ways uniquely their own, but all of a piece in the larger tapestry of those whose physical toil goes into their paycheck. 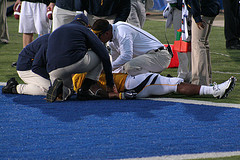 But there’s something else going on in the world of sports than mere body-for-hire. Something more complex, more theatrical, more about the larger salvation project tied into images of nobility, fame, notoriety and the single-minded pursuit of excellence in the public arena.

Something that makes athletes wiling to risk all for a sense of temporal spiritual transcendence, quite unlike the dignified, humble acceptance of the body-as-tool experienced by Kingsolver’s African characters.

I played basketball at the small college level. My scholarship didn’t depend on it, so there was no sense of livelihood connected to my continuing to perform. Nevertheless, the 30 or so games we played each season assumed an air of such cosmic importance that I couldn’t conceive of missing one—and thus went to tremendous lengths to ensure that I wouldn’t.

And I was not the least bit unusual in that quest.

In my junior year, I suffered a serious shin injury just before the season opener while foolishly playing touch football with a bunch of high school cronies over the Thanksgiving holiday. (Fearing my coach would sit me down if he knew the truth, I lied and told him I’d been playing basketball and had gotten slammed into some bleachers abutting the court.)

Getting into the gym before the game required some pathetic hobbling, as I could put virtually no weight on my leg. But some whirlpool, some painkillers, and some tape were followed by the extraordinary adrenaline rush of heading out the double doors from the locker room into our home gym and crowd, and I managed to play, and play well.

We won, and after the backslapping and showering and dressing and adrenaline departure, the shin was so tender I could put no weight on it all, managing only a grotesque sideways slide out of the gym to my dorm room located, blessed be, just across the street.

The next two nights of the three-night tournament, I did it all again, same script.

On other occasions, with highly problematic ankles that had suffered far too many sprains over the years, I was on crutches in between games, going to visit a team doctor who prescribed not only the standard anti-inflammatories, but a substance with the fun multi-syllabic name of “butazolidan.”

“They use it on horses,” the doctor said. “Powerful stuff, will really help your swelling.”

I gulped them avidly, and played nights when getting from my bed to the bathroom on that same morning had required minutes rather than seconds, teeth gritted the whole time. When I looked up butazolidan in preparation for this post, a touch of that teeth-gritting returned, along the lines of, “Oh dear…that’s what it was? And it has what potential complications? And a medical doctor was handing it out like candy to extremely competitive young men?” 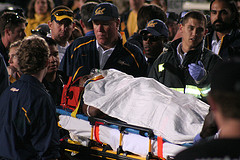 But this is only to emphasize the point that given the gladiator/warrior archetypes that seem to be universally entrenched in cultural narratives and the psyches of impressionable, mortality-denying young men (and increasingly, women), it is inevitable that they will throw their bodies atop the delayed-ignition land mines represented by physically demanding and potentially debilitating sports (and the treatments required to keep playing them). And they will do so gladly-if-blindly, seeking the payoff, the rush, the sweet nectar and excitement of game day, when they can test their talent and commitment and will in front of adoring, cheering crowds.

Several years ago, one of the papers covering the San Francisco ’49ers did a “How are they now?” reminiscence on the team’s Super Bowl champions from the 1980s. To a man, they had long lists of anatomical woes and functional disabilities. Can’t climb stairs, can’t walk without a limp, can’t cavort with their kids on the carpet, constant pain. Famed quarterback Joe Montana had trouble playing simple catch with his young son football players.

The article painted a dark picture of debilitated functional life after the limelight. Yet when the reporter asked them whether they would do it again, each one unhesitatingly exclaimed some variation of, “In a heartbeat!”

In sports, it is the prerogative of young athletes to put their health on the line every time they step out on the field of play, just as in war soldiers put their very lives on the line. Those decisions are not based on any discernible rationality in either venue, least of all on a long-term perspective regarding the ultimate costs of using one’s body in these demanding, violent ways.

With impossibly more money than they will ever truly need and not compelled to use their bodies as plow horses to feed their families, professional athletes nevertheless call upon their bodies to do the seemingly impossible every time they parade in front of a crowd. All in the quest for a peculiar kind of immortality that is itself impossible to achieve—but which has never in the least dissuaded them, and never will.
***

This short You Tube reel provides all the evidence one needs for the kind of potentially life-altering collisions that are always just one play away on the football field:

Many thanks to the photographers: Rotating banner photos (except library) at top of page courtesy of Elizabeth Haslam, some rights reserved under Creative Commons licensing, see more at: https://www.flickr.com/photos/lizhaslam/

3 comments to The Body As Tool: A Super Bowl Reflection