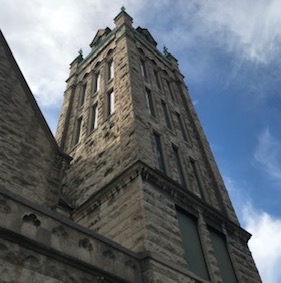 Get Vladimir Putin to butt out of our November election!

But of course, none of it is true. Because all of it exists only in the scattershot, meandering mind of President Trump, the most profoundly unreligious, ungodly figure ever to haunt the halls of the White House, as he desperately flails to rally his “base” once more by suggesting his opponent is a stand-in for Satan in the eternal, titanic battle between good and evil.

Donald Trump: ever on the side of the angels.

All this is by way of noting one of the undercurrents that caught my attention through the four-day Democratic virtual gathering: how much overt mention and testimony about religious matters there was. Led by the party’s standard bearer: Joe Biden, lifelong Catholic.

When it comes to discussing the underpinnings from which many religiously inclined Democrats form their strongly held beliefs, it is as if they are walking through a minefield, careful not to hit any trip wires that would taint and brand them as kooks, supernaturalists, flat-earthers, holier-than-thou Bible-thumpers.

Having suffered the deaths of his wife and daughter in an automobile wreck and later his son to cancer, Biden’s trials of faith and his decision to forge ahead with a life committed to public service bathed in empathy were a frequent subject of discussion this past week. Delaware Senator and Biden friend Chris Coons (he occupies Biden’s old Senate seat), previously unknown to me, is a Yale Divinity School graduate who spoke eloquently about Biden’s religiosity in a featured convention speech, noting: “For Joe, faith isn’t a prop or political tool.” (Gee, wonder who and what he could have been referring to…)

Then came a most revealing clip showing Biden on the campaign trail in a February (pre-Covid) town hall in South Carolina.

He was fielding a question about his faith from Reverend Anthony Thompson, whose wife was one of nine African Americans killed in that city by a young white supremacist at a church Bible study in 2015.

Biden spoke movingly about the “hope and purpose” his faith gave him in the wake of his own tragedies, but notably, he prefaced his remarks by taking pains to emphasize not once but twice, “I’m not trying to proselytize, I’m not trying to convince you…to share my religious views,” followed a few seconds later by, “I’m not proselytizing, but I happen to be a practicing Catholic…”

Note the careful aversion to “proselytizing.” It’s what religious liberals often do as a kind of pre-emptive action to ensure the religiously unaffiliated that they are not a certain kind of religious person.

You know: That kind.

The kind who jams their faith down your throat, who proclaims and gloats about the good word and their fidelity to it at every turn. Who doesn’t drink or smoke or cuss or have pre-marital sex or do any of the things that many secular people commonly think are strictly avoided by anyone who considers him- or herself “religious.” 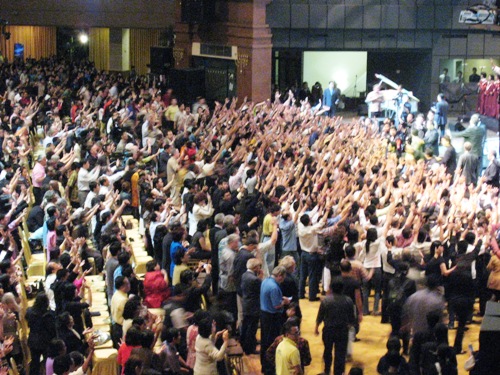 This is a kind of cartoon version of religiosity, of course, but one that happens to have remarkable staying power among a broad swath of the electorate. And it’s partly the result of right wing Republican evangelicals coming to dominate the religious marketplace at least since the “Moral Majority” took hold of American religious discourse in the late 1970s, spouting their narrow, rules-based, comfortably suburban and overwhelmingly white religious orientation that became strongly aligned with Republican electoral politics. Religious liberals have been in retreat ever since.

So much so that even in religious testimony by a Democratic presidential candidate in direct response to a question, he is almost self-programmed to begin his statement with a repeated caveat that he is not trying to “proselytize.”

Interesting that one never hears those caveats in relation to any other strongly held beliefs, despite candidates trying their damndest to proselytize about them. (Definition of proselytize: “convert or attempt to convert (someone) from one religion, belief, or opinion to another.”

But when it comes to discussing the underpinnings from which many religiously inclined Democrats form their strongly held beliefs on those issues, it is as if they are walking through a minefield, careful not to hit any trip wires that would taint and brand them as kooks, supernaturalists, flat-earthers, holier-than-thou Bible-thumpers.

That’s a shame, because one can go as far back as one wants—to that friend of whores and sinners, the abject and dispossessed and the lame, Jesus himself, and far more recently, to the likes of MLK and all those good preachers and parishioners, both black and white, who marched with him—for an unabashed religiosity that deeply informed their political views and actions flowing therefrom. 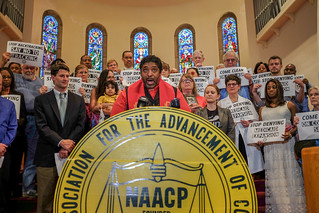 As it happens, I cringed when Julia Louis-Dreyfus came out in front of the camera to moderate the final night of the convention. Cute idea to bring in the star of “The Veep,” but someone around that strategy table should have pounded it in protest of a comic actress presiding amidst the gravitas of Biden’s acceptance speech, the segment with Coons, the courage and élan vital of young Brayden Harrington making his way, one stutter at a time, through a heartfelt tribute to his pal Joe.

A few minutes in, I realized who should have been in Dreyfus’s place: the Reverend William Barber (pictured just above), he of the “Moral Mondays” of steadfast protest, the closest figure we have in carrying on MLK’s tradition of religiously inspired activism. Like King, Barber is a uniquely inspirational figure, an impassioned preacher who knows who he is, what he is striving for, how to push and to wait and to push again.

Ah well—an opportunity lost. But not before Biden had the opportunity to discuss his faith, however qualified. One that is steeped in empathy, and charity, and a listening with his heart.

And in his specific Catholic tradition.

It is true that Democrats are generally a more skeptical bunch in religious matters than are Republicans. The Pew Forum surveys of religion in public life consistently show higher church membership and various other identifiers of religious inclination among Republicans than Democrats. But that is a long way from suggesting that Democrats are the party of atheists and agnostics.

A representative sample metric: “Religion is Very Important in my life”—Republicans 61%, Democrats 47%. This hardly suggests Republicans have a lock on religious values, or that only Republicans vote from religious convictions. It seems Democrats are beginning to realize that, and are no longer inclined to cede the mantle of religiosity to the white evangelical Christianity that comprises such a substantial part of the Republican Party’s base.

There is plentiful room, it turns out, for the religiously inclined under the big tent of diversity the Democrats are constantly proclaiming as a hallmark. That can only be a good thing as voters from a wide range of backgrounds converge on the singular and necessary goal of saving our country from another four years of the unthinkable.

My thanks to reader Jeanette Millard for the recent tip on this duo and this song!

8 comments to The Dems Get Some Religion