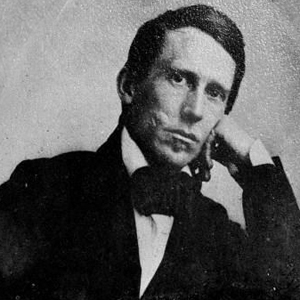 What to do with Stephen Foster? Among the greatest of American songwriters, reportedly the first to actually make a living at it (for a while), regarded by many scholars as the “father of American music.” Many of his 200+ songs written in the mid-19th century are embedded into the very fabric of American culture via countless cover versions by renowned musicians, abetted by millions of schoolchildren taking easily to his infectious, easily digestible tunes (“Beautiful Dreamer,” “Oh Susanna”, “Camptown Races,” “My Old Kentucky Home,” “Swanee River,” “I Dream of Jeannie With the Light Brown Hair,” “The Hard Times Come Again No More”).

Author of these lines, written for his wife Jane:

But there was this about him, too: Hopeless alcoholic who was selling his clothes at the end of his life in order to buy more liquor.

Died at age 37, three days after either an accidental fall or a suicide attempt left him lying bleeding and naked on the floor of his 25-cents-per-night Bowery Street flophouse, his wife long fled with their daughter.

He had gone to New York in what turned out to be his last desperate attempt to sell his songs to musical shows in an era before radio play and decent copyright protection would have solved the lifelong financial challenges that resulted from his poor business sensibility.

His one pair of remaining pants at his death contained his wallet with 38 cents in it.

Oh, he was also the author of these lines—from the original (1848) second verse of the wildly popular “O Susanna”:

I jumped aboard the telegraph and trabbled down de ribber,
De lectrick fluid magnified, and kill’d five hundred Nigga.

No, that wasn’t the version that Bing Crosby, James Taylor, Carly Simon and Charles Schulz’s “Snoopy” sang a century and more later, its first two lines having been long since amended to:

It rained all night the day I left, the weather it was dry
The sun so hot I froze to death, Susanna don’t you cry 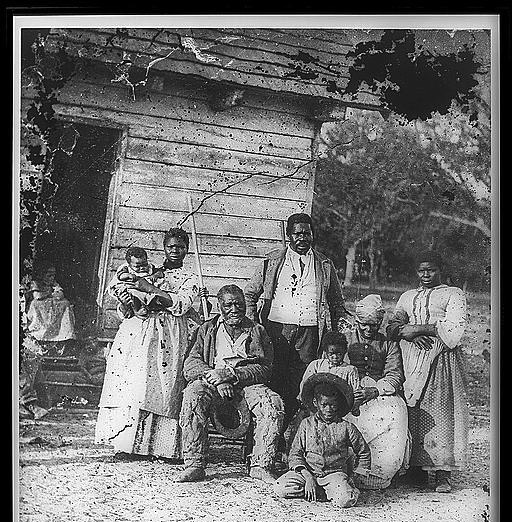 Five generations of a slave family in Beaufort, South Carolina

Foster wrote much of his music for pre-Civil War minstrel shows (he died in 1864) in which white singers smeared on black face and portrayed African Americans as shiftless and dense, slow in body and mind. It delighted those white audiences of the time who were steeped in the economic and psychological benefits they accrued from seeing slaves as subhuman.

So in between that and his clearly racist lyrics we see above, the temptation is to see Foster as just another white supremacist making money from slavery, unworthy of the time, attention and accolades he has been accorded, including the honor of continuing to have some half dozen elementary schools across the country named after him, from Florida to Wisconsin to Texas  to California.

But only very rarely are history and the geniuses who moved it quite so cut and dried.

Because it is also true that other of Foster’s lyrics portrayed the slave’s plight in poignant and human terms.

Writing in Smithsonian Magazine last year, the professors and brothers Alex and Steven Lubet had this to say:

“’My Old Kentucky Home, Goodnight,’ as it was originally titled, was written by Foster in the 1850s as an anti-slavery song, inspired by Harriet Beecher Stowe’s ‘Uncle Tom’s Cabin’ and following the same story arc as Stowe’s title character. His initial working title was ‘Poor Uncle Tom, Goodnight.’ The song emphasizes the humanity and close family ties of the enslaved population at a time when African Americans were routinely dehumanized and caricatured.”

The point gets even more complicated when we behold the then-common-as-dirt but shocking-today racial slur that Foster includes in the song’s first three verses while simultaneously painting a picture of the backbreaking toil facing slaves’ daily lives.

The song gives voice to a slave’s mournful departure from his beloved state after he is sold and headed for the deep south:

The sun shines bright in the old Kentucky home,
‘Tis summer, the darkies are gay;
The corn-top’s ripe and the meadow’s in the bloom,
While the birds make music all the day.
The young folks roll on the little cabin floor,
All merry, all happy and bright;
By ‘n’ by Hard Times comes a-knocking at the door,
Then my old Kentucky home, goodnight.

They hunt no more for the possum and the coon,
On meadow, the hill and the shore,
They sing no more by the glimmer of the moon,
On the bench by the old cabin door.
The day goes by like a shadow o’er the heart,
With sorrow, where all was delight,
The time has come when the darkies have to part,
Then my old Kentucky home, goodnight.

The head must bow and the back will have to bend,
Wherever the darky may go;
A few more days, and the trouble all will end,
In the field where the sugar-canes grow;
A few more days for to tote the weary load,
No matter, ’twill never be light;
A few more days till we totter on the road,
Then my old Kentucky home, goodnight.

Is Foster reprehensible with his use of “darky,” or commendable for noting the bowed heads and bent backs begat by slaves toting their “weary load” that “’twill never be light,” wrapped within a musical and lyrical mood of pathos and lamentation?

None other than the great black abolitionist and ex-slave Frederick Douglass thought the latter, writing in his autobiography, “In My Bondage and My Freedom” that the song “awakens sympathies for the slave, in which antislavery principles take root, grow, and flourish.”

Others have demurred, suggesting that Foster is extolling the virtues of “happy” slavery in Kentucky, as opposed to the horrors awaiting deeper south. But truly, the only “happy” slave is a freed slave.

Notably, the black singer and activist Paul Robeson, no one’s idea of an undignified milquetoast, captured the song’s deep pathos probably better than anyone with his sonorous baritone in 1936, not flinching from the song as it was written. (It was revised in 1968, with “people” replacing “darkies.”)

Robeson makes the sorrow and melancholy under Foster’s words almost palpable; feel free to give it a listen here before returning for some concluding discussion on the ever-sticky issue of how to view the tangled history that is every culture’s—and every person’s—perhaps most daunting task.

We tend to fall hard for our artists and entertainers and sports stars. We pay big money for the pleasure of them showing us their very best, most engaging selves, talented and creative and lovable, bringing us joy, making us feel good for a blissful few hours about life and its possibilities. Artists shed star power pixie dust with each little toss of their head, acrobatic move or inflection of voice.

Bruce Springsteen suddenly pivots amidst his pyrotechnic guitar playing, cocks his hand to his ear with a grin playing at the corners of his mouth, and the crowd roars, “Baby I was bo-ohrnnn to runnnn!”

No matter that greatly talented artists protest they’re just people like we’re people—we don’t accept that for a minute. Maybe intellectually we do, but emotionally, we regard them with a kind of awe and hold them to impossible standards.

After all, we could not possibly make them feel as good about life as they make us feel, so every penny of that $100 ticket is worth it!

All of this is classic projection, of course. Their talent aside, artists truly are no “better” at being people than we are. Some are better, some are worse. All of them have bad days, bad ways, bad phases, make ruinous decisions that cause them and their loved ones grief.

But in their work, they intentionally show us their most interesting and emotionally compelling parts—their best, highest selves, fully tapped into and expressed. From which we assume that they have special insights and maybe have figured this whole life & happiness thing out.

But most all the time, they haven’t—not necessarily any more, that is, than has an industrious junior accountant or a beloved custodian whose peeps have long noted their uncomplicated hearts of gold.

Was Stephen Foster a good person with a heart of gold, as expressed so clearly and hauntingly in “Beautiful Dreamer” and “Hard Times,” which plumbs the depths of life’s travails with a tender and soulful spirit?

Sometimes. Most certainly in the heart of that music.

But was he also too timid or ultimately unconcerned to use the platform he had at the time to more strongly denounce slavery’s evils and refrain from using the dehumanizing language that cropped up elsewhere in his songs?

I would have to say yes, though this is where we must tread carefully in answering the next question: “So then what?”

Denounce him as a racist and be done with his music forevermore, while renaming those half dozen schools bearing his name? (In 2018, in the wake of the Charlottesville disturbance, the city of Pittsburg did remove a 118-year-old statue of Foster that showed him with a barefoot black man at his feet, playing a banjo.) 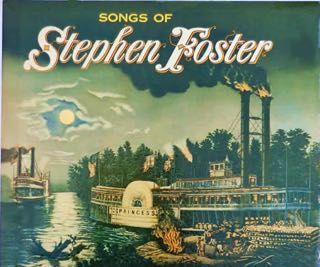 Stephen Foster was a good, in some ways bad, and in most ways a tragic man, which describes all manner of men and women struggling to reconcile the vexing questions of human existence in an inherently tragic world. He is above and apart from the vast lot of men and women, however, not because of his all too common casual racism, but because he left a remarkable artistic output that has and continues to provide great pleasure and inspiration to millions of people around the globe.

It should be noted that he generally endorsed the solomonic approach of his distant relative, President James Buchanan, who tried (and failed) to preserve the union by letting individual states decide whether they wanted to maintain slavery. And despite Foster’s close identity with southern-tinged songs, he was born in Pennsylvania and lived the bulk of his life in Pittsburgh, traveling south of the Mason-Dixon line exactly once in his lifetime, on a steamboat ride to New Orleans in 1852 with his wife.

Do his failings in a moral sense when morals and contexts have changed since he lived mean the failure of his life and work, no matter its other merits and what other currents may have coursed through his heart?

What role forgiveness and understanding, of him and others who lived long ago, in times and contexts far different than our own?

Ultimately, if we do not take a broader view of past failings, can we ever, on both a national and personal level, come to reconcile our own?

22 comments to The Stephen Foster Problem