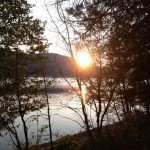 When I was 9 or 10 years old, my brother landed a paper route, distributing the Eagle Rock Sentinel on Thursday and Sunday mornings. It meant getting up at 5 a.m., walking six or seven blocks to the drop-off point, bagging up papers on the street corner in the dark, then hoofing it up and down a hillside neighborhood for a couple of hours, dropping a paper as near to every porch as possible (especially those whose owners were known to tip an extra dime on top of the 40-cent monthly fee).

Pete was three years older and already showing the entrepreneurial bent that would lead him to a long career as a partner in an accounting firm. So he hired me to help deliver the papers, scoring me my own bag so we could walk up both sides of each block and thus cut the delivery time in half.

He paid me the princely sum of a dollar for each such outing, eight dollars a month. The money came in handy for the baseball cards and candy and books (yes, even then…) I avidly purchased in the daylight hours of my life. Memory tells me I stayed with it a couple of years or so before getting my own route and thus dramatically increasing my take-home pay. (Notably, I also hired a friend as my helper at the same dollar-a-day rate my brother had paid me. No fool was I…)

But the experience it bequeathed me, no doubt leading to my lifelong habit of being an early riser, was of the light and the stillness, the silence and the peace of the black-to-gray-to-golden hour or so when the night gives itself in the orderly, yet ever-new way that it does to the dawn of another day. There’s a peculiar kind of magic in that threshold hour, and it is replicated almost verbatim on the day’s flipside as the sun sets and dusk leads us into the night.

All of us know this hour. It’s the solitary walker’s hour (often with a dog), the hand-holding lovers’ hour, the meditator’s hour, and at least at dusk, the drinker’s hour. It transitions and even unmoors us from the darkness or daylight that precedes it, the air most always still, the mountains luminous, the waters of the lake at their most placid. All the background noise of the dayworld is mysteriously drained, emptied of content and import; shapes lose their edge and distinctiveness. Limits and constraints get blunted; the world becomes awash and open, and one is given to inchoate longings.

You are walking in this netherworld and a car pulls up and the driver needs to make Santa Fe by late morning, a thousand miles, easier if the wheel is shared. You ask if there’s maybe a drug store before you hit the highway, so you can buy a proper toothbrush. Then you get in. 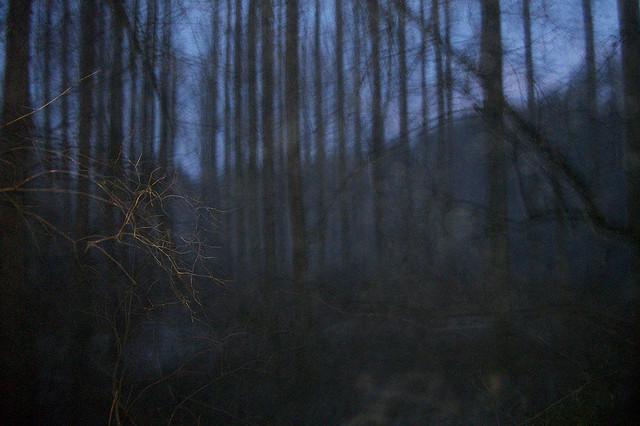 In this betwixt-and-between state, employing no real effort or intention of our own, our minds declutter from the dreams of the night or the cares of the day, and we find ourselves settling into a sublime and self-possessed quietude. Sunrise, sunset.

This, dear friends, is the true Twilight Zone, with all due apologies to Rod Serling. And it is delicious almost beyond words.

In his exhaustive (851-page) chronicle of human consciousness and religion, A Secular Age, the Canadian philosopher Charles Taylor describes early humans as saturated in both terror and wonder, living in an enchanted world overseen by often capricious and distant gods who require constant placation. Primitive, yes, but alive and aglow—the very trees sang in praise or howled in warning.

Come the rise of rational thought and science, and the enchantment waned, in almost perfectly inverse proportion to the advances of the mind. Religion itself calcified into hard and fast dogmas and creeds, as disenchanted and drained of vitality as a slide rule. Increasingly confident and self-possessed, homo rationalis bestrode the land.

All bets are off, though, in the Twilight Zone.

In this liminal state of neither day nor night, here nor there, power resides in the unknown and non-rational. Identity is looser, persona takes a back seat to the senses. We enter uncertain waters, and instead of resisting, at these hours we welcome its bath. Subject to ravaging beauty one moment and obscure vision the next, both weakened and empowered, bound and free, we are sobered with the murkiness of our fate and drunk with its possibility.

Not knowing when the dawn will come I open every door.
—Emily Dickinson

This is also the very best time to be outside, whatever the locale, a trite neighborhood of tract homes as pregnant with meaning and expectancy as the most cherished and charming retreat. Yet there is no guarantee of clarity, even as the daylight comes cascading in with the morning sun. Perhaps even less so then. Uncertainty is Lord and Master of this true hour of power.

Once the day makes its claim, we face the order, regularity and conceits of the ego-and-time-bound world, or at night, the transition to nourishment, sociability and rest. Dawn and dusk, those gray hushed twins of openness and possibility, recede, the jacks put back in their boxes, the lines around our identity and desires etched back into place—until next time.
*** 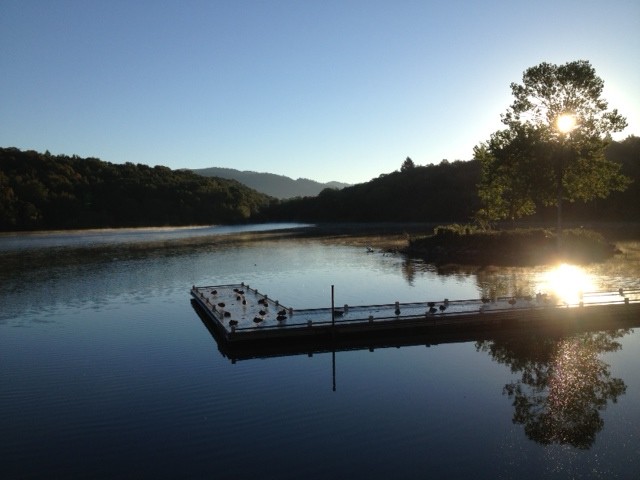 Woods-at-dusk photo middle of page courtesy of “A Quiverful of Photos,” Bristol, England, some rights reserved under Creative Commons licensing, for the artist’s Flickrstream, see http://www.flickr.com/photos/isthis4real/with/4234023218/

Small and large sunrise photos top and bottom of page are courtesy of the author’s pocket iPhone, about as trusty a companion as one can have on a hike into the Twilight Zone. Speaking of which…

4 comments to The True “Twilight Zone”