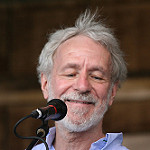 The world’s best love song doesn’t have “love” in the title, nor does it appear on any “Best” lists that I could find of the most love-centric titles for Valentine’s Day. No “Love Me Tender,””Greatest Love of All,” “She Loves You” (“yeah, yeah, yeah!”), “Love Is Blue,” “I Can’t Stop Loving You,” “How Deep Is Your Love.”

Instead, the world’s best love song is titled, “Sham-A-Ling-Dong-Ding,” and it may just be the now departed singer-songwriter Jesse Winchester’s finest work in an illustrious, if under-appreciated career.

The silly title is both fun and deceiving, offering Winchester a playful refrain that could easily have been rendered into a clever har-de-har bit of laughter, an inconsequential breather (not that there’s anything wrong with that!) in an ouevre that sparkles with lyrical originality, accessible, compulsively singable tunes, and his trademark impeccable phrasing.

But “Sham-A-Ling-Dong-Ding” goes somewhere else instead.

The first stanza takes us suddenly and unexpectedly into the power of memory, where we are swooped into being 17 again (Shazam!) on a summer’s night, dreamy with inchoate emotions and the wonder of discovery we can barely begin to comprehend.

Ah yes, teenagers falling in love. And the secret language—verbal in this example, but also a language of looking, blinking, gazing, smelling, murmuring—that is beyond words altogether but no less powerful.

Whether teenager or much older still, there is a language of the outer world and everyday social interaction, and for lovers, an invisible—at least to all others—cocoon of almost hermetically sealed love language, an intense private exchange that only they are privy to with and of each other. In that world, “language” isn’t always up to the task.

I could go on, but I won’t. Instead, I give you one man on a stool, singing from the deepest wells of all he has known and learned from his tender heart, reflecting, remembering, praising in its most profound sense. That is more than enough on this Valentine’s Day, I trust.

So give this a close look and listen instead (full lyrics are below), and note the awe and the depth of response from Elvis Costello and Neko Case. This is why human beings write music, and poetry, and all the other mad-for-life art that so gladdens the human heart.