The Rhumba Man Sings No More: A Jesse Winchester Appreciation 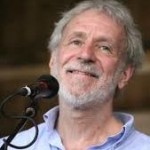 I don’t know when the term “singer-songwriter” came into vogue, but it’s difficult to think of anyone who defined the very essence of that term as cleanly and clearly as Jesse Winchester, he of the impeccably rendered lyrics, near perfect diction, lovely simple melodies and sincere, affectless stage presence.

Winchester died on April 11, just about a year after I gravitated to his music for my shortest ever blog post in the wake of the Boston Marathon bombing. At the time, his soothing and tender balladry seemed just the prescription for a tormented national psyche.

Winchester engendered a deeply devoted following over his nearly 45-year recording career. That career took a distinctive turn very early on when he opted to go to Canada in 1967 rather than respond to a draft call that might have seen him pressed into service in Vietnam, a war he considered morally repugnant. He thought he was leaving forever, but President Carter’s amnesty allowed him to return for visits, though he stayed in Canada (Montreal) until 2002, when the love of a good woman drew him back to his homeland for good.

Winchester was a deeply humble and gracious man, deflecting all talk of heroism for standing up for his beliefs and abjuring all glitz and artifice in his writing and performance.

A man in a sweater, strumming a guitar on a stool, singing always from his heart; that was Jesse Winchester.

Or as a friend of mine and devoted Jesse fan described his music: “Clean, clear, simple, deep and beautiful.”

Winchester’s lifelong quest was to search his heart for a purity of feeling that always probed the essence of basic human emotion and experience. First love, mature love, love of place and people and playfulness, the cherishing of memory and its details —these made up nearly his entire oeuvre.

When I learned of his death, I was not alone in feeling suddenly bereft, as if I had lost a dear friend. This struck me as both weird and wonderful, given I’d seen him in concert only once and never had any other interaction with him over the years. But that statement misleads, ignoring as it does the intense and repeated interactions that take place between singer and listener, writer and reader, painter and viewer, in a kind of intimate dance that defies all conventions of “relationship” as we know it. With an artist who regularly bares his soul and invites you along as Jesse did, the “relationship” one develops with him or her is palpable and life-enhancing, and its loss is real and acute.

Fortunately, his music lives, his voice will go silent no time soon. Please consider yourself invited to partake in a few wisps of it below.

In an interview a few years ago, Winchester cited Sham-A-Ling-Dong-Ding as the favorite of his own songs. The playful title belies the song’s deep emotional resonance wrapped in a compulsively hummable tune. And the poetic rhythm is like a gentle force of gravity that invites a leaf to flutter to the earth, nestling into a crevice designed just for it. The first stanzas:

Departing from the quietude and proving he had rock chops even if he didn’t much exercise them, Winchester joined his big fan and admirer Jimmy Buffett on stage in 2010 to sing his classic Rhumba Man in front of a far larger and more boisterous crowd than was his norm.

Finally, this searing song of departure and enduring hope serves as a sort of elegy for a consummate artist now stilled by the inexorable march of time and death. Full lyrics just below.

I wave bye bye
I pray God speed
I wish lovely weather
More luck than you need
You’ll only sail in circles
So there’s no need to cry
No, I’ll see you again one day
And then I waved bye bye

I wave bye bye
I pray God speed
I wish lovely weather
More  luck than you need
You’ll only sail in circles
So there’s no need to cry
No, I’ll see you again one day
And then I waved bye bye

Appreciation for the rotating banner shots at top of page to Elizabeth Haslam, some rights reserved under Creative Commons licensing, see more at: https://www.flickr.com/photos/lizhaslam/

4 comments to The Rhumba Man Sings No More: A Jesse Winchester Appreciation