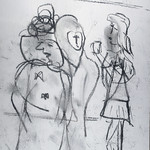 Near the end of Edward Albee’s 1994 Pulitzer Prize-winning play, “Three Tall Women,” two of them, cryptically named “A” and “C,” finally profess their general dislike for each other. (“B,” the third woman, fills the Switzerland role of studied neutrality.)

Though not particularly surprising given the multiple barbs and eyerolls A and C have been sending each other’s way, it is a sad interchange for any reader or viewer who has followed their interaction through the play’s two acts.

That’s because A and C are the same person at different stages of life. (B is part of the mix, too; more on her below.)

C is 26, most of her life ahead of her, with the kind of self-assurance often begat by innocent, optimistic youth that is yet to be bruised and chastened by experience.

A is 92, obviously intelligent and refined, but just as obviously bitter, some for the ruins of her past but also for where that past and her age have landed her.

Plagued by creeping dementia and incontinence, A must also suffer two women in her house who serve as virtual alter egos from much younger, almost alien stages of her own life. Their very presence as vital, unembittered beings shines unwanted light on the deep crevasse she has slid into over the decades.

As you no doubt have suspected by now, B is mid-life at 52, wiser for her years, in a (mostly) sweet spot that has her perched long past C’s innocence but not yet on the slide down toward A’s despair.

Albee’s ingenious little plot device of giving each of these three personages a voice and a distinct character as they joust with each other over their shared but disparately experienced realities makes for a fast-paced study in character, the vicissitudes of personal history, and the coherence (or incoherence) of a Self over time.

Also prominent: darkly funny barbs that contributed to Albee’s stature as one of the premier playwrights of his time. 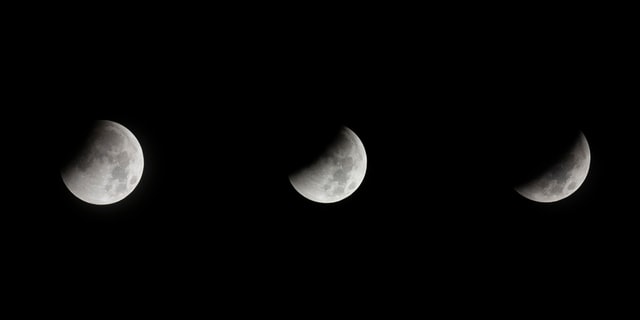 Albee is perhaps most famous for “Who’s Afraid of Virginia Woolf?”, an incendiary, emotionally exhausting depiction of a marriage gone grievously wrong that won a raft of drama awards after its 1962 debut and was made into a 1966 film starring Richard Burton and Elizabeth Taylor that won awards of its own. (Given the fireworks of the Burton-Taylor marriage(s) and divorce(s), the film’s intrigue included the question of just how much the two near-mythical stars actually had to act…)

Albee’s renowned body of work had begun with his one-act “The Zoo Story” (1959), which I remember reading, head down and riveted, on a loud team bus on the way to a college basketball game in 1972.

His output was thought by critics to have gone somewhat slack through the ’70s and ’80s before “Three Tall Women” revived his fortunes and launched a late creative period that extended into the new millennium. He died in 2016 at age 88. 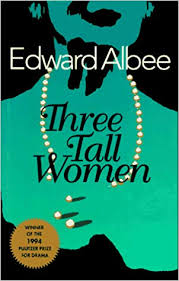 The oddity of characters identified by initials and representing the same person dissolves quickly in “Three Tall Women,” as each carves out the appropriate, readily identifiable niche they occupy in the trajectory of this life.

Despite that dawning knowledge as we read along, the actual morphing of the three characters into one person doesn’t occur until the second act. In the first, B is ostensibly there as a caregiver and C as a young professional sent to discuss A’s finances.

But then A suffers a stroke as Act 1 ends, and Act 2 begins with a mannequin on the set to represent her moribund Self, while she is now free of dementia and all-knowing (and acerbic as hell!) as the sole repository of the whole of their shared life.

Her observations grow more pointed about What Happened Back Then, some of which B has lived too but C has not. So A and B join in warning C about What Is Still to Come. (A philandering husband now dead, a son who left home never to return, etc.)

At one point, C rails against both A and B, but they respond with bemusement:

All of which begets intriguing questions that sprout out from the play as we identify in particular with C’s sense of confusion in grappling with a future that in many ways horrifies her. Could she really be fated to become this old woman whom she in no way thinks she resembles?

I suspect If her good friends were in this play, they would likely see the throughline; we often don’t see ourselves with nearly the clarity our intimates do. This fits with my own long-held observation-belief that most of us don’t change dramatically with age; we just become more intensely and transparently who we have always been—the good, the bad, the in-between. 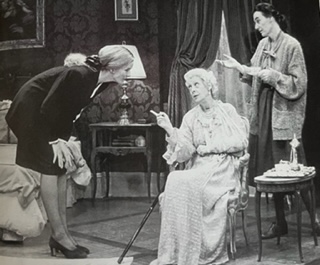 Another surprise awaits with the appearance late in the play of the long-lost son, apparently having heard about his mother nearing death. We have to surmise this, however, because he remains mute, an almost ghostly presence as he hovers near A.

What we do know, however, is that A isn’t much moved by his appearance, having long since come to her own form of reckoning with his absence, and not much impressed by this otherwise shocking reappearance.

But B, at 52 with the wound of his departure still fresh, almost spits in his face while roaring, “Get out of my house!”

A shushes her younger self, drily observing, “Let him alone. He’s come to see me.”

Followed by C: “He’s….my goodness. How nice; how handsome, how very…”

Then, incredulous that this young man will be hers at one point in her future but then won’t be and the fault could lie with her, C cries out:

A’s “Hahh!” doesn’t yet end the action or stanch additional revelations still to come, primarily for C and us about these women’s collective life.

It has been a life lived in three parts (at least as far as we know), as three songs, or perhaps as an unconventional three-movement symphony with different moods, textures and rhythms running through each.

Do those movements add up to a coherent whole? Hard for us to say about them; harder still for them.

“You’re too close to it; you can’t see it clearly,” we sometimes say to friends, trying to be helpful about some knot they are describing that vexes their lives.

Perhaps we’re always too close to too much in our lives, all our therapies and sesshins and beseechings to the almighty notwithstanding.

In that case, a “Hahh!” of understanding may be the best we can do, even at 92, for ourselves and all the other selves from A to Z who live inside us and yearn to make peace—with all of us—along the way.
***

Pencil drawing at top of post by Michael Szpakowski  https://www.flickr.com/photos/szpako