We Are All Guilty 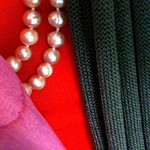 My online pal Amy Morgenstern over at Sermons in Stones had a brief blog post recently in which she asked, “…Is there a special place in hell for people who spend $425 on a lace t-shirt in a world where they could use that money to feed a hungry family for a month? And if so, am I going there too for spending $65 on a jacket?”

It’s a great couple of questions, and in my response to her I indicated that I had long had a blog post in mind addressing them, with the headline as you see it at the top of this page. She said she would read that post if I wrote it, so Amy, this one’s for you. (And for anyone else who has pondered these same questions, which I am going to guess is everyone who peruses this site.)

Unfortunately, the issue is not only $425 t-shirts and other forms of conspicuous consumption by what is commonly regarded as the 1% in this country. Because the truth is that most people in the developed world are part of the 1% when measured against the grinding, intractable poverty and primitive living standards that still reign supreme across vast swaths of the world in the 21st century.

That’s the terrible and true math of income and dumb-luck-place-of-birth distribution in this world. 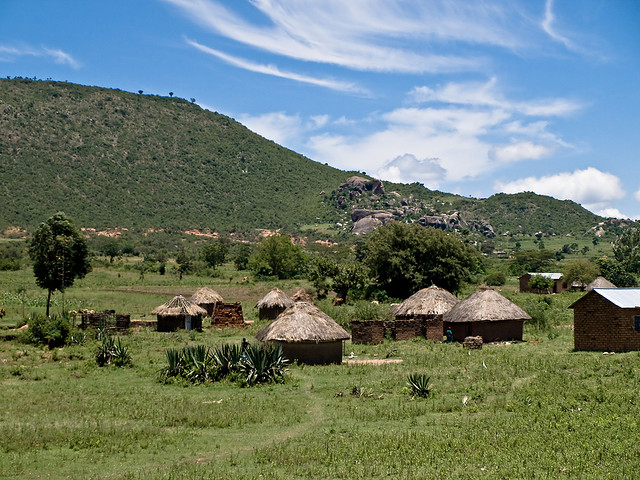 When I spent a summer in Kenya after graduate school, I was 31 years old without an asset to my name, no particular career prospects, and barely enough income to pay rent and ponder whether to spend 25 cents for a daily newspaper. So I was amazed at—and quickly grew weary of—how persistently the locals asked me for money I did not have and goods I could not afford to buy.

It took me a while to realize that as a westerner, I’d been able to pay for plane fare to a faraway land—with a pit stop in Europe—and was heading back to my own studio apartment on the beach in Marin County, where I had sole and blissful possession of about 250 square feet of living space and my own bed, along with electric lighting and running water and flush toilets and no dirt floors or thatched roofs.

All this was beyond the wildest imaginings of the villagers I exchanged pleasantries with every day, and whose stories I occasionally heard while nursing a Tusker beer or the local cheap-as-dirt firewater known as “changaa.” To them, I was as 1% as they come.

Mr. Andrew, the tycoon from California.

We live with this reality, because this is life in an imperfect world with structural inequities we did not choose or much promulgate, but whose advantages we enjoy unless we insist on self-enforced privation.

Here is the difficult, challenging part for all us first worlders, to which there is not an easy answer, not in a house, not with a mouse, not in a box, not with a fox: In a fundamental, existential way, we do participate in a zero sum game in this world, in which our consumption—even at the modest, relatively restrained levels that socially conscious people try to effect —is at the expense of those less fortunate.

How? It’s as simple as this: If we wanted to, we could forego or cut back a vast array of extra-curricular pleasures that we don’t really need for our survival and instead give money for food and shelter to others who really do need it for their’s.

Sure, we middle-classers might already give to hunger relief and work a soup line while feeling resentful of those spending $425 on a T-shirt and nervous about spending $15 for our own.

No, we don’t take or use anything close to what hedge fund managers do, we drive Priuses and maybe even shop second-hand; we work for justice and a more equitable tax system.

But we, too, are self-evidently guilty of having and consuming too much in a world of chronic shortage and environmental strain.

Full refrigerators, cars, gadgets, vacations, restaurant meals, art, furniture, club memberships, therapy, shoes for every occasion and a belt for every shade of clothes—almost none of it necessary as such. All of it serving to create a rewarding quality of life that is the envy of much of the world (including the poor in our own country).

All of us come to our own hard determinations, weighing competing needs and desires and fears in finding our own balance on the assets we keep to maintain a satisfying lifestyle and ensure ourselves a secure future in this extraordinarily privileged period and place in history.

And we are tycoons, all of us.

We all draw lines between what we keep for ourselves and give to others, and most of those lines are beyond what we strictly need for our survival as others go wanting. We live with this reality, because this is life in an imperfect world with structural inequities we did not choose or much promulgate, but whose advantages we enjoy unless we insist on self-enforced privation.

These are the roll-of-the-dice imbalances we must ultimately accept, the cosmic shrug in which we must join, whatever our attempts at redress via charitable giving, relief work or simple expressions of compassion. 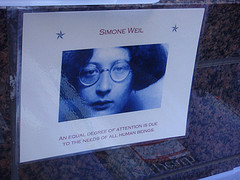 What is the alternative? Noted French philosopher and mystic Simone Weil tried one by being so attuned to the unfairness of life and the hardships endured by so many that she decided during World War II to eat only what she understood to be the rations of those living under German occupation. This despite the fact that she suffered from tuberculosis with severely compromised health, and there was a more or less adequate (and much needed) food allotment available for her.

Her act was one of solidarity and extreme sensitivity, but it also may have contributed to her death as her body could no longer summon the energy to fight off her disease. Is this what conscience requires of us if we are to live up to our spiritual ideals?

How many of the world’s hungry can and should we feed while reducing our own consumption? By how much should we reduce?

Where is our line?

Weil is often held up as a model of spiritual integrity, her reputation almost hallowed, her name spoken in reverential tones, but was her refusal of food a truly spiritual and uplifting act, or its own peculiar form of irrational, misbegotten indulgence?

Perhaps in death her and her words of justice-seeking and solidarity ring louder and serve to inspire more than they otherwise would have, but we must at least also ask about the cost of no more words or perspectives from her, no wisdom of age she could share  (she died at 34), her voice silenced thenceforth for want of adequate health.

What would a merciful and loving God have wanted of her? Or phrased in more secular terms, what would the life force, the hunger she effectively squelched by a sheer act of will, have wanted?

Perhaps the trickiest part of this discussion: Should we feel guilty about our exalted economic status? Would that perhaps lead us to some more righteous balance of our own and others’ material needs, satisfying our all-too-human and often competing desires for fairness and the maximum flourishing of our own lives in their pursuit of happiness?

Christianity, no doubt the most personal of all religions, informed America’s own Founding Fathers in their official, enshrined endorsement of individual happiness. God loves us just as we are, Jesus died so we would be free, grace and promises of abundance and healing abound in this world that was pronounced “good” by the Creator of the Universe.

Should it shame us that so many of our brothers and sisters have it bad? Spur us to give away all that we have, as the Book of Mark urges us, to help the poor? Or live somewhere in between those poles of shame and ultimate charity, in an uneasy truce between the debilitation of shame, the glow of charity, and the satisfaction of creature comforts that are now deeply ingrained in our culture and personal history?

Can we settle into that truce with a sense of integrity, knowing the world is tilted on a strange axis indeed, accepting it as we can, making an honest (if less than total) effort at redress, while knowing that no matter what we do, life, as our parents reminded us so directly, just isn’t fair and never will be?

19 comments to We Are All Guilty