A First Take on India: The Road From Delhi 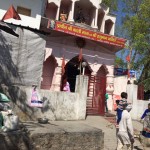 So I have made my way to India with my 17-year-old daughter and a traveling companion who knows the technical ins and outs of the Internet in order to help smooth the way for a Telemedicine project to be initiated in the low mountain town (3,000-foot elevation) of Nahan, which, if you kept going east up the mountain and could fly, would land you in a few hours in Nepal and the Himalayas.

It’s about six hours northeast by car from Delhi, which we negotiated yesterday courtesy of our ever amiable driver, Mr. Singh, and our host, Dr. Suresh Sablok of Nahan, whose rural hospital and clinic has signed on for a Rotary-sponsored, do-good-in-the-world project of connecting via computer modem a Sebastopol, California doctor to rural health centers around the world.

The American doctor, James Gude, does a basic “grand rounds” tutorial weekly, sitting in front of his laptop at his local hospital in which he provides the kind of continuing education most western doctors take for granted but which is a hard-won benefit in third world rural areas where the flood of impoverished patients, iffy reimbursement, and remote locations work against the ability of doctors, nurses and other providers to continually expand their professional repertoire.

So that’s the backdrop for this visit and this post, but I will say no more about that eminently worthy pursuit for now.

Instead, I made a few notes of my wide-eyed marveling and head-shaking wonder at the sites and sounds on the road from Delhi to Nahan yesterday while I snapped away as furiously as I could with my iPhone as it all flew by at 60 miles an hour.

Here those notes are, minimally edited and composed johnny-on the spot, in approximate order of how the scenery played out before me, with some photos that can’t possibly do justice to what I attempt to describe. 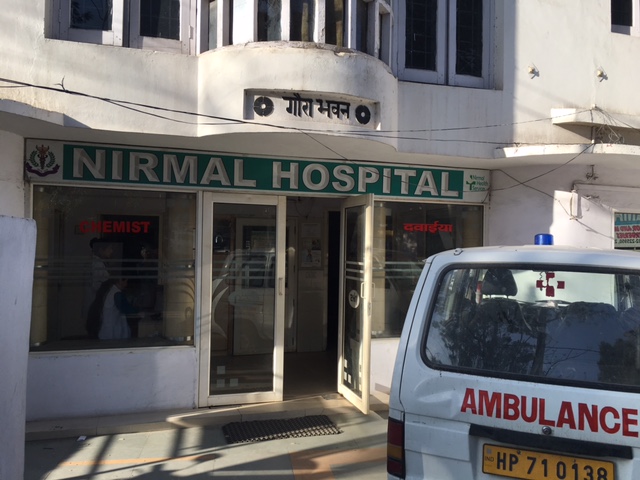 People, people—everywhere, people. A never-ending mass of humanity by, on the side of, and right on the road—in shantytowns, on bikes, cars, trucks, “tooki-tooks” (golf cart type putt-putts pictured at the end of this post), wagons, swarms and swarms of motorcycles, walking, huddled in groups…Everywhere, people. (1.32 billion of them, according to 2013 U.N. census data.)

A tooki-took with bags of chips hung from the back, large mounds of bread rolls across the driver’s lap, water, soft drinks, candy, peanuts and bags of other goods strewn and piled high.

Two stooped men walking their bikes with huge bags piled 20 feet above their heads, straining to move along on the side of the highway.

Cricket players in vast fields of compact dirt where future overpasses may be, though God knows the completion date, because so much of the countryside and the country itself seems in a state of half construction, half decay, loads of bricks awaiting their expression on one dusty block, which frame piles of rubble slightly yonder, where brick and cement of past centuries continue their disintegration.

The roadside vendors swarming the car with strawberries, raspberries, mangoes. I make the mistake of looking and one vendor becomes insistent on the other side of my window. My driver Mr. Singh shakes his head sideways and says, “Fruit no good.” (He means the water it has been washed with has a high chance of being disagreeable with your digestive system.)

Mr. Singh is a Sikh from Punjab. He tells me he makes 8,000 rupees a month, $120, which supports his wife, three kids, his unemployed sister, and parents (all of whom remain in Punjab while he works the few hundred miles away in Nahan). He’s on call 24/7, is never paid extra no matter how much he works. “Difficult,” he says, in his halting English. “But God…” And he points to the sky.

Then he tells me, brightening, that his 20-something sister “marry in October—six months!”

“Celebration! he twinkles back at me. “You invited!”

We laugh heartily, and I think, “Oh God, would I ever love to attend Mr. Singh the Sikh’s sister’s wedding in Punjab…” 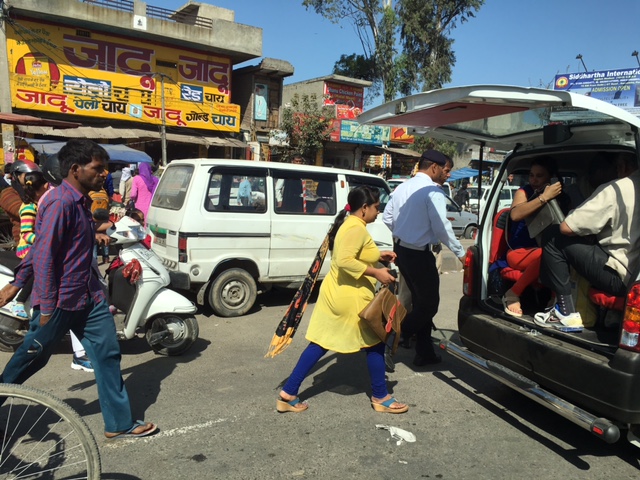 Young man on a motorbike in helmet, a woman in flowing colorful dress behind him sitting side-saddle, unhelmeted, cradling an infant in her lap as he careens between cars, detours into a petrol station and negotiates a slight mound of dirt in order to bypass a few more cars, then is off, far ahead of us toward wherever his task was taking him and his precious cargo.

A donkey pulling a cart as our Mercedes SUV zips past.

Of course these people believe in God (many gods, actually). And here they are by the billion, with billions more like them around the world, decent and devout and unfailingly humble and polite, never thinking to rob or assault or bomb me or my loved ones. 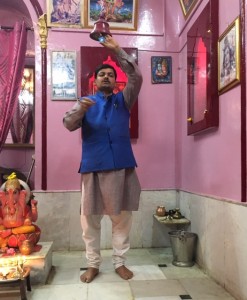 Their simple quest: to live with some sense of meaning and hope where so much may otherwise seem hopeless, their intellects and daily doings devoid of abstract arguments about angels dancing on pins or the conditions of redemption. Eyes fixed on their gods and the toil in front of them, unmoved by the carefully reasoned demolishing of religion propagated by those with rational cases to make for the ultimately irresolvable mysteries of existence.

The fact that they come together at day’s beginning and end for prayers and singing and calm and blessing is a bad thing?

Didn’t seem to be the case to me as we stumbled upon an evening service (pictured at right) in a Nahan hillside temple while strolling through the park with our hosts.

How many trucks does it take to convey food and goods to a billion people? THIS many! (Picture countless trucks here, in various conditions of decrepitude, carrying an astonishing range of materials piled very likely to unsafe levels with the goods of the world.)

Everywhere human forms stooped in fields, cows tethered to trees in front of huts, well-behaved dogs wandering the streets, looking reasonably well-fed for the beggars they are.

How hard these people work, the grinding daily toil for their daily bread…

Men peddling ancient one-speed bikes uphill into a stiff wind, trailing long heavy loads of pipes, plant material, firewood…Using the simple labor-saving tool of centuries, which itself is powered by the even more ancient tool of their own bodies, like the very pack animals they might employ if such animals didn’t need food and tending, which their bikes don’t…

Where are these men hauling their cargo, for how much compensation, and where will they lay their heads when the sun descends and their labor is done? 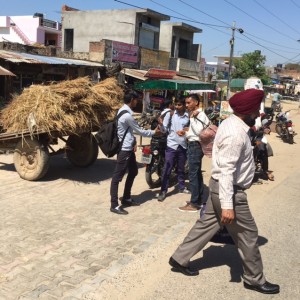 The astonishing array and quantity of stuff lying around—mountains of rubbled cement and rebar, bricks and old tires, bundles of firewood and vegetation, bottles and rusty cans, old bicycle wheels. The leavings of a civilization.

Toll roads for the well-heeled who can afford the 45 cents and more they require. But once you’re off the highway,  narrow two-lane country roads, traffic both directions, bikes and carts and scooters and walkers on both sides, requiring essentially four lanes.

The resultant math works like this: What appears to be often razor-thin lane-splitting and passing, with everyone like ants, effortlessly flowing around and past (never into each other on a long day’s journey I witnessed), though very frequently by what seemed to me within a hair-raising milisecond of their lives.

At one point, Mr. Singh deftly passes into a lane with oncoming traffic in what would been heart attack time in the U.S., complete with blaring horns and raised middle fingers. But it actually wasn’t serious at all and nobody blinked or glared.

“You’re pretty good at that,” I say, laughing a bit nervously and nudging his shoulder.

Big grin from him: “No problem.”

A man and woman, stooped a few yards apart in a vast field of dirt stretching behind them in the mid-day sun, their hands slowly moving.

An old man in a plastic chair under a tree, his eyes cast out to endless fields… 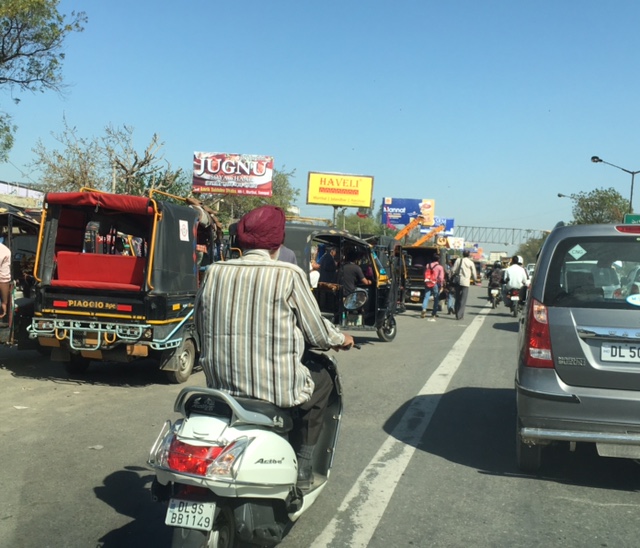 Darwin proven right again: the ubiquitous dogs that have adapted to traffic so well that I saw not one dead in the road; even puppies trail after their mamas at roadside without wandering the extra three feet that would put them in harm’s way.

Thousands upon thousands of tiny hovel storefronts with a lone person, usually male, awaiting customers. Chips, cokes, a few eggs, maybe some oranges and tea. Surely these are more businesses per capita than can exist anywhere else, I speculate.

How does Lay’s and Coke get their goods to so many vendors—through what kinds of layered distribution channels? And how do so many of these vendors survive?

Would the answers to those questions dwarf the complexity of our speculations about the existence and function of the gods?

6 comments to A First Take on India: The Road From Delhi