Eighty-five years ago this past week, April 26, 1937, was a market day in Guernica, Spain. It was a Monday, when farmers from the surrounding countryside would bring their crops into the town square to sell to residents and others who flowed in from surrounding towns in the autonomous Basque Country.

The Spanish Civil War was raging at the time, pitting the Republican government against General Francisco Franco’s rebel Nationalist faction and fascist allies Germany and Italy. Guernica, with a population of some 5,000, had not been a center of combat, but it stood some 30 kilometers east of Bilbao, population nearly 200,000, which Franco coveted as a strategically important possession to bring the government to its knees.

That made Guernica ripe pickings as a staging area for a nationalist assault on Bilbao—and also a test led by the German Luftwaffe’s “Condor Legion,” which sought to answer a question that was just then developing in the annals of modern warfare: Could a city’s civilian population be “terror bombed” and brought to submission strictly by a devastating display of air power, bringing such ruination and despondency to a country that no commitment of ground troops would be required?

Franco and the Luftwaffe got their answer, and out of it came not only the destruction of a wide swath of Guernica and the loss of several hundred lives, but also a famous, world-shattering Pablo Picasso painting (shown below), discussed in a long ago post here.

And more recently: a stirring 2005 song by British producer, pianist and songwriter Mike Batt, the 28th in this  “Brilliant Songs series” that has now been running for over four years.

Perhaps the first thing one notices in the signature version of “Market Day in Guernica” debuted for Batt by Katie Melua, a former Soviet Union (Georgia)-born singer who emigrated to the United Kingdom with her family at age 8, is its slow, ambling pace and her matching softness of voice.

All while keeping an eye on her gamboling children and their skipping game.

War may be nearby, but it will not ruin this day. Until she hears the roar of the bombers, that is. Let’s listen to the song now and then return for some closing discussion. Full lyrics will follow.

So simple, really. (Which is often the genius of profound songs and other arts.)

A mother, her children, a springtime jaunt to the market, the kids in front playing a skipping game.

Her father, in a linen suit—oh, but I can see that suit now—cream-colored, pressed, impeccable. Topped by a panama hat to keep out the sun.

A transition from play and brightness (though a question intrudes: why does she sound so plaintive?) to a search for forgiveness.

Because her “little ones no longer play/In Guernica, on market day.”

The image haunts, because we can see this young woman’s life spread out to the end of its days, haunted as we are by the monstrous undertones of those children no longer playing.

Two stanzas on, Batt no longer surrounds this aching, tragi-beautiful tale in dulcet tones of children playing or not, as the woman’s father is “blown away/In Guernica, on market day.”

Then the song essentially ends, in five-word resignation, her children, her father, her very life “Away/Away/All blown away.”

Horror and the suffering of innocents has been a part of every war, but aerial bombardment targeted at civilians where they live, worship, give birth and seek medical care has introduced an entirely new and merciless element into war’s equation.

Nazi Germany tried its hardest to perfect the technique in World War II after its early “success” in Guernica. And Franco went on to rule Spain with his iron boot until 1975.

Today, a certain country bordering Russia is experiencing the same terrors, though on a grimly more extensive basis, in multiple of its cities, great heaps of rubble fast becoming the symbol of this time.

Regrettably in one sense and beautifully in another, his song speaks only more clearly today to the particular, ultimate human costs of war that no human should ever be asked to endure.

I search my soul but cannot start
To find forgiveness in my heart,
My little ones no longer play
In Guernica, on market day.

My father wore his linen suit
On market day, in Guernica
He always sold the finest fruit
Before they came to Guernica.

Now there’s no way to let him know
How much I loved and miss him so
I watched as he was blown away
In Guernica, on market day.

Away
Away
All blown away.

***
Batt adapted the song to a musical production called “Men Who March Away” in 2017, performed in lovely fashion by the Scottish actress and singer Paula Masterton. For unknown technical reasons, You Tube is not embedding it here, but just click on this link and you’ll be there.  https://www.youtube.com/watch?v=vkkwfhRj9MA
***
Finally, Guernica today… 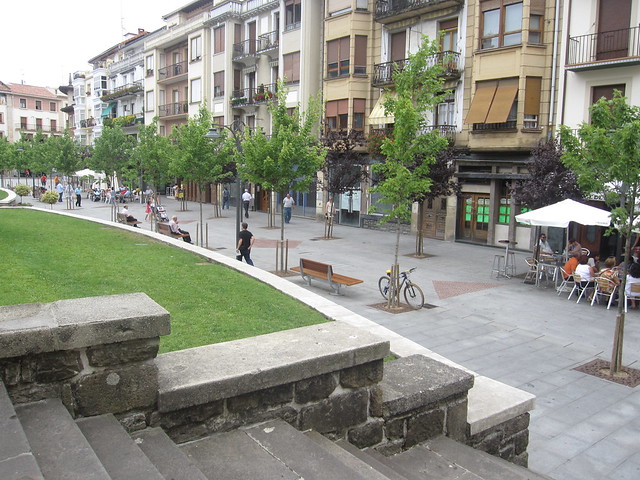