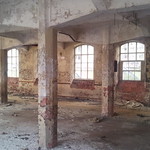 Sometimes a particular piece of music hits you as so insightful, so acutely reflecting the issues of your time, that the songwriter seems to be channeling some urgent message the gods require in order to restore a measure of balance and perspective to the insanity that abides, on the events of your historical moment that leave you shaking your head and wondering, “How can this be happening?”

And then, in a kind of doubling down on the songwriter’s vision, the message of his or her song in a subsequent era, rather than fading into irrelevance, instead achieves even more urgency, as the forces that helped shape the original message grow only more dominant and oppressive over time.

And then, as if anticipating the far more divisive and nativist rhetoric that would sprout from the seeds planted in the Bush era, McMurtry scores with this bull’s-eye painted with eerie prescience right on the back of the current administration…

Such is the case with James McMurtry’s “We Can’t Make It Here,” a 2004 composition that the Texas singer-songwriter wrote to protest George W. Bush’s America. In McMurtry’s piercing lyrics that never bother to catch their breath with a chorus, that America is a land of chicken hawks lusting for war and maximizing profits for the leisure class while mouthing verbal salutes to “family values” and doing zilch to stanch the bleeding of working class jobs to cheaper, more desperate populations overseas.

The song, from McMurtry’s “Childish Things” album, is now 15 years old, but to give it a listen in 2019 is to be catapulted into the far greater hypocrisy and betrayal of American values being perpetrated by the Trump administration, next to which the George W. Bush era stands as a paragon of decency and virtue (well, except for Dick Cheney).

Let’s have a listen now to McMurtry’s clearly discernible lyrics, which can be found en toto here, from a studio recording by KFOG radio in San Francisco. We’ll then return for some additional discussion.

McMurtry’s core message of the working class getting screwed while fat cats thrive isn’t new, but its rendering in these vivid lyrics makes for a compelling listen. It calls to mind Woody Guthrie and Pete Seeger, prophets of their own time, hip to the machinations of a sharp-elbowed capitalism whose most powerful players forever seek sanction from the very state they decry.

The setting of “We Can’t Make It Here” is in the industrial heartland, the plants and factories to which high school graduates could flock in the post-war world for decent-paying unionized jobs that saw them home for dinner if they chose to be and able to afford a couple weeks on the lake with the family come summer.

These are residents of Michigan, Ohio, Pennsylvania, who “made it here” at one time—made the goods that propelled the American economy and “made it” in their pursuit of the vaunted American dream.

But that dream had busted out with a fever by 2004, from which it would not recover. The cause was a heated push by corporate America to dodge taxes and the payment of livable wages by sending jobs to poor nations overseas, their huddled masses yearning for the relative freedom (to eat, to afford rudimentary shelter) that their paychecks of a few pennies on the dollar would bring.

All while engaging in foreign policy often guided less by Lady Liberty than by the military-industrial complex, including the oil companies with their unflagging commitment to keep the world safe for pipelines and tankers.

The result was the kind of scene we have all witnessed on American streets, but which McMurtry developed into a dark anthem:

No one’s paying much mind to him
The V.A. budget’s just stretched so thin
And now there’s more coming back from the Mideast war
We can’t make it here anymore 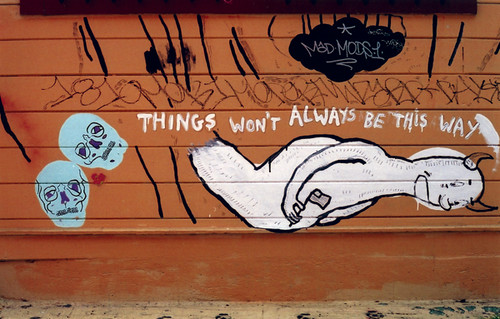 Emptiness and desperation haunt this song and the streets it pictures, and this was before the opioid epidemic that makes a mockery of the current president’s triumphal claims of a booming economy fueled by happy, fully employed supporters. If the economy is so great, why is there still so much anger and addiction?

Perhaps because “employment” by Wal-Mart with its cheap Chinese goods isn’t quite what working class Americans had in mind after all as they survey the wreckage of the jobs that went away and a power structure that abetted it:

And then, as if anticipating the far more divisive and nativist rhetoric that would sprout from the seeds planted in the Bush era, McMurtry scores with this bull’s-eye painted with eerie prescience right on the back of the current administration:

The narrator here is wise to the wool being pulled over the eyes of American workers stretching back for decades. Neither of the Bushes nor Clinton nor Obama, for that matter, did anything to stop the hemorrhage of working class jobs.

What Trump has done masterfully, however, is to channel these workers’ rage and then deflect it onto the “other”: the Muslims, the Mexicans, the socialists, the namby-pamby internationalists, the effete anti-gun zealots, the baby-killing abortionists about which he cared not a whit until he realized even the most ardent Christian evangelicals would overlook his rampant, profoundly un-Christian immorality so long as he mouthed the right words about the “sanctity of life” and appointed judges pledged to uphold it.

And then it’s off a Mar-a-Lago:

No, we’re not making it here anymore, in any way. A nation adrift, lost, two islands shouting across a divide, riven by a true “wall”—of alienation and anger fueled by a charlatan and his enablers. How do we find our way back?

Via the voting booth, is the best answer I can come up with.