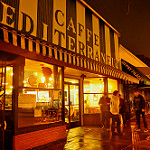 Decades ago, when I had my head buried in theology and philosophy at Graduate Theological Union, Berkeley, I used to regularly wander over to the Caffe Mediterraneum on Telegraph Avenue, a kind of rough-hewn and clattery coffeehouse with a 1950s pedigree, way before coffeehouses-ala-Starbucks got chic. The place had a kind of Mideast/Turkish vibe, the servers usually dark and mustachioed, the patrons hunched over their espressos with stacks of art books or Heidegger and Sartre philosophical tomes prominently displayed next to them on the round tables.

The “Med” wasn’t everyone’s cup of tea, as it were, but its tone of brooding, vaguely discernible despondency and graduate school noir held a certain bohemian allure. All of it was punctuated by regular visitations from mentally ill mendicants who would occasionally step through the doors from Telegraph Av and loudly berate their phantoms before just as quickly exiting.

As synchronicity would have it, I had also entered a kind of bromance-across-the-centuries at that time with Vincent Van Gogh and his impossibly expressive elaborations of night skies and wheat fields and potato farmers and…café patrons.

To me, all of Van Gogh’s thick brush-strokey-Impressionistic-whirligigs seemed to reflect the true, intense, vibrant reality underlying all things, rather than some illusionary “hyper-reality” into which they were too often pigeonholed.

One painting, “Night Café,” particularly held me in its thrall, given its tonal similarities, at least according to my own romanticized sensibilities, to the Cafe Med. 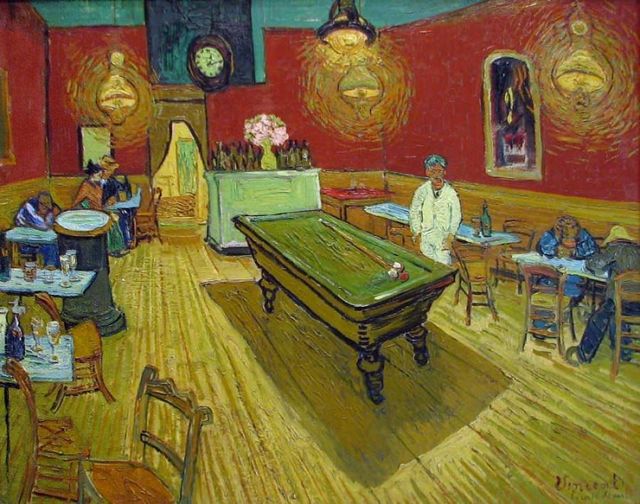 “Night Café,” despite its somewhat gloomy pall, became (and remains) one of Van Gogh’s best-known paintings since its completion in the fall of 1888. It is compelling for all manner of reasons, not the least of them, in my estimation, being its compare-and-contrastability with another Van Gogh café depiction, “Café Terrace At Night.”

Search words being what they are, a Google search of “Night Café” often brings up “Cafe Terrace at Night,” even though the two could not be more different in tone, color, artistic intent, and overall effect.

Yes, both depict cafés at night, but Van Gogh himself drew sharp distinctions between them. Here he is writing to his brother Theo about “Night Café,” in commentary from two letters written a day apart in early September:

“I have tried to express the terrible passions of humanity by means of red and green…Everywhere there is a clash and contrast of the most alien reds and greens, in the figures of little sleeping hooligans, in the empty dreary room, in violet and blue…I have tried to express the idea that the café is a place where one can ruin oneself, go mad or commit a crime. So I have tried to express, as it were, the powers of darkness in a low public house, by soft Louis XV green and malachite, contrasting with yellow-green and harsh blue-greens, and all this in an atmosphere like a devil’s furnace, of pale sulphur.”

“A devil’s furnace, of pale sulphur”—one feels the danger of asphyxiation merely staring at those words a few seconds too long.

Contrast that with his commentary on “Café Terrace At Night” in a letter to his sister Wilhelmina in the week following the letter he wrote to Theo:

“I was interrupted these days by my toiling on a new picture representing the outside of a café at night…Here you have a night picture without black in it, done with nothing but beautiful blue and violet and green, and lemon-yellow…My dear sister, it is my belief that it is actually one’s duty to paint the rich and magnificent aspects of nature. We need gaiety and happiness, hope and love.
The more ugly, old, mean, ill, poor I get, the more I want to take my revenge by producing a brilliant colour, well arranged, resplendent.”

And so he did with his terrace at night, a night depicted without a scintilla of black paint, only “resplendent” colors with patrons and street strollers open to the gaiety projected by bright oil lamps and plump stars. 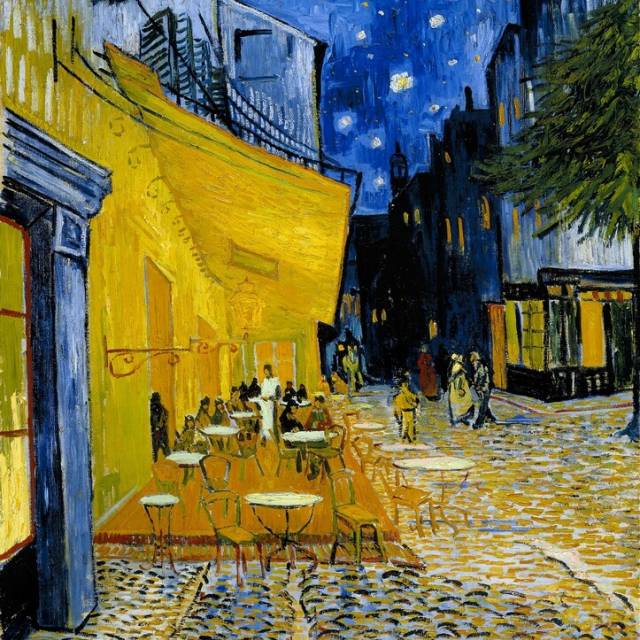 “Night Café” is static, the owner in his white coat standing inert with nothing to do, the billiards table unused, the patrons hunched either in melancholy, a drunken stupor or hushed negotiations. (Van Gogh indicated that’s a prostitute and her customer in the far left corner, which we could almost assume given the establishment’s downbeaten pall that would surely repel any self-respecting woman who wasn’t plying a trade.)

“Café Terrace At Night” is comparatively dynamic, vibrant with the night life of those seeking to engage with their fellow humans in the joys of eating, drinking, walking and making merry.

Venture down almost any town in the world’s commercial streets on a weekend night and you’ll see these happy scenes, though usually far thicker with people, herding close and rubbing off on each other—both literally and figuratively—just as most all our companions in the animal kingdom do.

There are very few lone-wolves-by-choice among our highly sociable species. This makes “Night Café” all the more heartbreaking, given that despite its sense of lost doomed souls, those souls have yet gathered here, in this “devil’s furnace,” seeking still to huddle with others, however desperate their individual circumstances.

It calls to mind how the homeless in our own communities find each other under bridges and in soup lines, often forming alliances, sharing the hodgepodge contents of their overstuffed shopping carts, sometimes falling in with each other as romantic partners.

Stronger as two, as twenty, joined together under frayed tarps and shantytowns, bulwarks against the cruel wind.

One can’t gaze at these two paintings without confronting questions of beauty and the fate of humankind.

Van Gogh painted “Night Café” almost in irritation, as projected payment to the café’s proprietor for the room he had rented above it, and which he disparaged and complained about as not being worth the cost. He painted it over three nights, sleeping during the day in order to fully experience the night he was trying to chronicle. He wound up calling the painting “one of the ugliest I have ever done,” and even expressed reservations about letting it stand as payment to the proprietor-landlord.

“I’m not making a point of it,” he wrote, about the possibility of squaring that deal.

I can only respond that I have to depart from him here, calling into question the very definition of “ugly” as opposed to the “beauty” which he obviously ascribed to “Café Terrace At Night.”

It’s true there is little redemption shining through the sulphur of “Night Café.” And perhaps it is only a leftover hearkening of my own to graduate school romanticism that draws me so to it.

But I am more inclined to think that the beauty of “Night Café” is in accord with the John Keats dictum in “Ode to a Grecian Urn”:

And the truth about humanity, or at least one of its truths, is that a certain number of us, and a certain part of all of us, are inhabitants of this night café, disconnected, alternately frustrated, unfulfilled and empty, alone when we need companions, thrown together when we don’t, living lives, in another poet’s (Eliot’s) words, of “quiet desperation.”

And in that sense, how could it be anything less than beautiful?

Equally true, and thus beautiful, too, of course, is “Café Terrace At Night,” with its well-lit, beckoning air, its movement and bright tabletops open to the stars. A waiter is in motion here, and the patrons sit upright and expectant.

We treasure these opportunities for communion and fellowship, for wine and dancing and song, so much so that all over the world, people spend far more of their budget than their financial advisors would suggest in pursuit of their rewards.

To alter another well-known dictum about work life: “No one ever died thinking, ‘Gosh, I shouldn’t have spent so much going out and having great times.’”

Assuming that falls into the category of “What nobody said, ever,” we can see that these two poles of our sometimes fragile, other times amazingly stout humanity give a nicely rounded picture of the pains and joys that so reinforce one another as we drift from one café to the next in our lives, gazing through windows, poking our heads inside and asking in all hopefulness and need, “Hello? Is there anyone else here?”

Van Gogh paintings in the public domain, “Café Terrace at Night” housed in the permanent collection of the Kröller-Müller Museum, Otterlo, Netherlands, “Night Café” at the Yale University Art Gallery.

7 comments to Dark and Resplendent Nights: A Study of Van Gogh’s Two Cafés