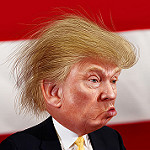 On this morning of Super Tuesday, Trump remains the decisive front runner in the race, with most of the smart money coming down on him as the eventual nominee (80 percent odds in the latest betting markets report, vs. 17 percent for Rubio and 5 percent for Cruz; figures total more than 100 percent for technical reasons I do not understand).

And beyond winning the nomination, could the previously unimaginable possibly happen, with President Donald Trump reigning atop the world as its most powerful person come next January?

Don’t ask me; I’m obviously unqualified and too dim by half to predict anything at all about this most remarkable political season.

But here are a few things I have come to realize (I think…).

1. Sure, a good deal of Trump’s support comes from racist, xenophobic, uneducated yahoos, but it would be yet another mistake to think that’s the beginning and end of it. Many other decent, reasonably intelligent and fully functional people (Chris Christie doesn’t qualify) support Trump because…he’s right about some things. (Oh, it was painful typing that, but it’s true.)

Such as, you ask?

2. He’s right that the system doesn’t work anymore, that it seems almost irretrievably broken and gridlocked, with partisan warfare masking a deeper truth: both parties are bought off and generally do the bidding of corporations and their lobbyists. (Bernie Sanders says the same thing, and he’s right, too, but this post is only tangentially about him.)

3. Yeah, Trump’s a Republican and supposed conservative, but his primary allegiance is to dealmaking, as he continually reminds us. And dealmakers don’t do ideology or cultural/political/religious fervor—they do deals.

This is why mainstream, true-blue conservatives are aghast at what they see as his highjacking of their movement; he’s not at all one of them. Trump’s conservative Republicanism is a front, the exoskeleton that allows him to hook up with the prevailing two-party system that is necessary to win the presidency. Though I suspect he is not even 10 percent as smart as he’s always claiming to be, he’s at least smart enough to know that independent candidacies win nothing but a few headlines in U.S. politics (and a rare Senate seat in Vermont).

On multiple issues in the past, Trump has tended toward laissez faire libertarianism or liberal orthodoxy, supporting abortion rights, gay rights, a progressive income tax, restrained foreign intervention, and affirmative action. Bill and Hillary came to his wedding, for crying out loud! (I’m pretty sure he didn’t invite Ted or Carly.)

4. Trump’s “dealmaking” is, in truth, the kind of flexibility that I and everyone I know (including Barack Obama when he assumed the presidency) want in our politicians. It’s what democracy is all about as envisioned by our Founders.

In a complex and pluralist society, nobody ever gets everything they want; that happens only in oligarchies and theocracies. (Or “democracies” actually run by lobbyists; which is where we have descended in the U.S.)

Exhibit No. 1 in that argument: Medicare, the largest purchaser of health care services in the country, is prohibited by law from competing for prescription drug prices in the marketplace. That’s not even socialism, it’s communism, and the drug companies, supposed kings of the “free” market, are the sole beneficiaries.

In a democracy, compromise is the coin of the realm. It’s Tip O’Neil and Ronald Reagan, sharing a drink and splitting the difference on taxes in a late night gabfest. Trump understands this, and so does Obama. Ted Cruz, Mitch McConnell & Co. hate the very idea, which is why Trump scares the bejeezus out of them. His conservatism is mostly a sham, an expediency, and they know it. He’ll sell their cherished, unbending, jihadist principles out in a heartbeat if it helps him cut a deal. 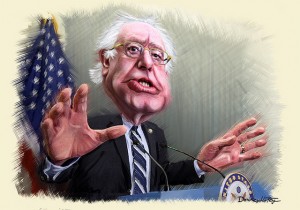 5. I have come to realize it is almost impossible to under-estimate the degree of despair much of the voting public feels with our system, and how a good part of that public yearns to just dump the whole rotten carcass overboard and start again. It is almost the stuff of revolutions and civil wars, with the irony being that the despair is shared in common on both the left and the right.

This is where the Bernistas and Trumpistas actually meet: the system is corrupt, and it needs a reboot.

Enough shaking our heads and shrugging our shoulders, resigned to eking out a piece of justice here, a sliver of workable immigration policy there, a shard of tax fairness over yonder.

It is in many ways dismaying but not surprising that Trump backers don’t care about his inconsistencies, his faux religiosity (is there anything more transparent than his pretensions of being a true blue Christian?), and the fact he’s nowhere near as truly conservative as many of them are. What appeals to many of them is his call of a pox on the entire house of how our politics happens today. No matter that many of his positions are xenophobic, his claims hyperbolic, and his moods and mannerisms adolescent at best, mired in locker room insults questioning the manhood and intelligence of his opponents.

Yes, his yahoo element of supporters love his xenophobia and thinly veiled racism, but that doesn’t explain the depth and endurance of his support nor the passions that fuel it.

In his indictment of our current politics, his decrying of the “disaster” (seemingly his favorite word) of the puffed up interventionism that led to the Iraq War, his vow to take on his “friends” the corporate lobbyists (“I know these people; I make deals with them all the time”), Trump is speaking to a deep discontent with the status quo, and that, at least, is shared widely, all across the political spectrum.

Add up the two most prominent spokespeople for that discontent, Trump and Bernie, and you’ve got a very significant—and increasingly vocal—part of the electorate shouting loudly and yearning to have their voices projected into the prevailing political winds:

“I’m as mad as hell, and I’m not going to take this anymore!”

On Facebook? Visit this blog’s public page there for daily snippets of wisdom and other musings from the world’s great thinkers and artists, accompanied always by lovely photography. http://www.facebook.com/TraversingBlog

Photo of Trump “signing the pledge” not to wage an independent candidacy by Michael Vadon, some rights reserved under Creative Commons licensing, see more at: https://www.flickr.com/photos/80038275@N00/