Jagged Trajectory: From Renaissance Glory to Lord of the Flies 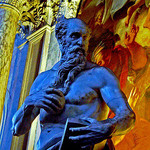 The older I get, the more sense history makes. All the pieces of humanity’s exceedingly checkered past fall more into place, resulting in both more compassion for what we have come through and alarm for what continues to befall us. More than 500 years after the Renaissance posited that humanity could become a shining beacon of perfectly realized rational values, we lurch from one crisis, one massacre, one civil war, one bellicose despot to the next. One part or other of our world is always threatening to go up in flames even as many of us preoccupy ourselves with whose dessert will make the grade on the next installment of some epic cooking show that plays like the Last Judgement, set to music.

These thoughts occur as I work my way through two books that have piled atop each other on my reading table this week: Charles Taylor’s sweeping account of the secular-religious tracks running on their often parallel courses through human history, A Secular Age, and William Golding’s chilling 1954 novel and well-known staple of high school sophomore reading lists, Lord of the Flies.

Lord of the Flies has been a particular revelation as I have read along with my daughter for her 10th grade English class. It’s a terrifying book, all the more so for adults who can more deeply absorb the questions it asks about the evils lurking not all that dormant in the human soul. 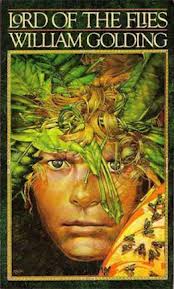 Just in case you’ve erased your entire sophomore year and its reading list from your memory, the book’s setting is an uninhabited island where a group of well-bred English boys have survived the crash landing of their plane during a time of war in the larger world. They immediately set about creating a temporary civilization while awaiting rescue, but what begins as an orderly and cooperative governing structure quickly begins to crumble as page by page, Golding chronicles an inexorable descent into irrationality, superstition, power struggles, savagery and ultimate mayhem.

Golding’s vision of the thin veneer separating our savage and civilized sides stands in sharp contrast to the 15th century’s emergent faith in human perfectibility. The deep humanism of that era aimed to “do away with violence and social disorder altogether,” writes Taylor in A Secular Age. The Middle Ages had been “steeped in the view that there are severe limits to the degree in which sin and disorder can be done away with in this world,” he writes. But Renaissance thinkers saw the task ahead as one of education and culture, rippling across the world  to create a new way of being, shorn of the superstitions and savagery of primitive life.

This was the glorious trajectory the Renaissance began charting for humanity, a time when the true individuality and inherent worth of persons would at last be acknowledged, self-discovery and self-fulfillment encouraged, and a modern era of civility and goodwill would begin its reign.

“Ha ha ha,” one is tempted to bark in response, half a millennium later, after a century that included two world wars, nuclear devastation and a steady parade of genocides and lone wolf mass murderers.

“Because rules are the only thing we’ve got!”

“Bullocks to the rules! We’re strong! We hunt!

Even closer to this era, the headlines this week have been dominated by a modern dictator who set upon his own people with poison gas amidst yet another civil war, while the civilized world furrows its brow and searches its conscience and its politics for an appropriate response. One of those potential responses is a fusillade of bombs raining down from unmanned planes, almost guaranteed to inadvertently kill innocent victims while seeking out “worthy” military targets. Another response is to negotiate with the genocidal dictator via another dictator. In the words of the late Kurt Vonnegut: And so it goes…

The hopes of the Renaissance for advancing human consciousness seem almost quaint now, given the extreme lengths to which murderousness and malevolence have gone in the centuries since.

In his recent and surprisingly optimistic book, The Better Angels of Our Nature, psychologist Steven Pinker may point to the sheer quantity of violence going down in recent times, but there is no denying that its genocidal capacities keep intensifying. Undergirding that capacity is the persistence of our survival-based animal nature, which, given enough provocation and threat, still lashes out, all over the world, every day, in the darkest baseline language it knows: me-against-you, us-against-the-world violence. 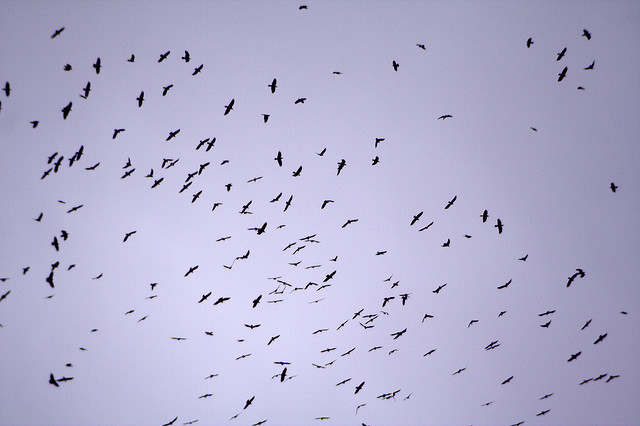 Golding’s exploration of the descent to this baseline human response is almost unparalleled in literature, it seems to me. So it is worth quoting here a couple of harrowing passages in which the tribe of boys who have broken away from their former rational and peaceable leader in favor of a more primitive and ruthless hunter-leader engage in the tracking and killing of a pig. It is both graphic and hypnotically written in depicting the falling away of the individualism and new humanity that the Renaissance had put forth. Here anonymous mob behavior rules the day, frenzied, sadistic, cathartic:

“…the sow staggered her way ahead of them, bleeding and mad, and the hunters followed, wedded to her lust, excited by the long chase and the dropped blood. They could see her now, nearly got up with her, but she spurted with her last strength and held ahead of them again. They were just behind her when she staggered into an open space where bright flowers grew and butterflies danced round each other and the air was hot and still.

Here, struck down by the heat, the sow fell and the hunters hurled themselves at her. This dreadful eruption from an unknown world made her frantic; she squealed and bucked and the air was full of sweat and noise and blood and terror. Roger ran round the heap, prodding with his spear whenever pigflesh appeared. Jack was on top of the sow, stabbing downward with his knife. Roger found a lodgment for his point and began to push till he was leaning with his whole weight. The spear moved forward inch by inch and the terrified squealing became a high-pitched scream. Then Jack found the throat and the hot blood spouted over his hands. The sow collapsed under them and they heavy and fulfilled upon her. The butterflies still danced, preoccupied in the center of the clearing.

Golding draws a remarkable picture here of bloodlust in the middle of an otherwise “normal” and lovely nature scene where bright flowers grow and butterflies dance. Once the scent and sight of the prey’s blood is manifest, the predator becomes consumed and half-mad with desire to finish the task, the intensity of the effort only multiplied by the shared focus of the hunting band.

Whether the prey is a pig or a Tutsi, a Jew or a Vietnamese cowering in a My Lai ditch, the same kind of tightly focused but deranged bloodlust envelops the predator, all civilizing norms absent, no rules nor restraints of culture acting as brake on the atavistic rush to carnage.

He had even glimpsed one of them, striped down, black, and red, and had judged that it was Bill. But really, thought Ralph, this was not Bill. This was a savage whose image refused to blend with that ancient picture of a boy in shorts and shirt.

The Rwandan Genocide, the Rape of Nanking, the Mountain Meadows Massacre, Wounded Knee—all of them group endeavors—complemented by sole madmen Richard Speck, Charles Whitman, Adam Lanza, and the duos behind the Oklahoma City bombing, Columbine, Boston: it’s a depressing list, one that grows longer with every season. Every time another such slaughter occurs, we read the reports with shock and dismay, despite there being nothing particularly unique about them. Yes, we’re still a ways, it turns out, from the vision of our 15th century ancestors and their hopeful visions of a humanity turning the corner toward perfectibility.

That said, with full understanding that murderous impulses still roil within us all (though they seem decidedly more tilted toward flaring up in males, which is another blog post altogether), I would hasten to add this: Most people are far more good than bad. The evidence is everywhere around us, in the daily lives led by people from remarkably different cultures, in dramatically different circumstances the world over.

Yes, we’re neurotic messes and worse a good deal of the time, desperately in need of the tools of cultural restraint and self-inspection that humanity has worked so hard to develop over the eons, and in which our Renaissance forebears had such faith. But on the whole, when you tally it all up in a ledger, it strikes me as undeniable: Most of us are more O.K. than not. More kind than mean most of the time, more compassionate than cruel, more giving than taking.

Sure, sometimes it seems the good barely ekes out the bad—as in a 50.1-49.9 percent election cliffhanger—but at base, propped by enough supports of culture, education, family, breeding and our seemingly innate need to give and receive love—human beings can be counted on more often than not to be decent and even friendly in pulling their weight for the common good. This remains both my subjective observation and my faith, upon which I long ago decided to build my life and relationships and trust in the world. Works like Lord of the Flies simply remind me—and us—to be ever alert and cognizant of the contrary impulses that still keep residence within us.

***
I never quite understand how people in the 16th century managed to look quite this fabulous, what with the lack of modern dentistry and decent razors, but there’s no denying the charm of this dance sequence from The Tudors. And with all those candles illuminating young faces in soft light, who has any need for Thomas Edison?

Small photo of Renaissance Man statue in Friars Minor of the Order of San Francesco Basilica in Venice, Italy, by Gerald O’Sullivan of Dublin, Ireland, some rights reserved under Creative Commons licensing. See more of his work at: http://www.flickr.com/photos/stendec/

2 comments to Jagged Trajectory: From Renaissance Glory to Lord of the Flies