Song of My Stuff 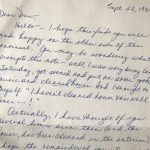 We come into the world naked and possessionless, then are scooped up within moments to be swaddled in warm comforting materials, diaper in place, our toes wrapped in plastic name tags, a little beanie on our vulnerable heads—all of these our first possessions, serving as the forerunners of hundreds of thousands more if we are fortunate enough to eventually join the ranks of the aged.

In my youth, I owned an MG Midget, a sporty wisp hardly bigger than the plastic cars parents push their toddlers in as they circle the block in that charming, devoted way they do.

I jammed most everything I owned into that Midget in the several moves I made while it was in my possession during my four-year early career as a special education teacher.

Two weeks ago, some 40 years later, I employed one of those giant pods (biggest size available at 8’ X 8’ X 16’) to move my life from the west to the east coast, and I’m pretty certain I could have fit my Midget into it right along with all the items that are even now making their way across the country toward me:

bookcases and books to put in them,
an easy chair in which to read the books,
business and personal files,
boxes of correspondence from those halcyon days before email,
kitchenware, art, photographs, more books,
many shirts and outerware torn from their hangers
in the last frantic hours before the new owners
claimed my house as theirs,
a gaggle of T-shirts from runs and other events dating back to the ‘70s,
more socks than I thought I had,
an ancient road bike gifted to me by my late brother,
a comfy quilt or two,
various hard copy academic papers,
a few favorite shot glasses, beer glasses,
aw hell, wine glasses and champagne flutes too,
coffee cups and bottle openers,
some more books,
“big event” newspaper front sections
(Nixon’s resignation, Obama’s victory, the Giants in 2010, ’12, ’14…),
darling drawings and notes from my daughter when she was a tyke…

And here I will stop in deference to that famous listmaker Walt Whitman, who could and did go on for pages chronicling such matters in that song he sang of himself.

About these and the many other unlisted items, however, I hasten to add that they were placed in the pod after I spent several weeks, no, months, divesting myself of hundreds more items large and small, either to various and multiple charities, some select sales, and giveaways to the daughter, friends and neighbors.

(The wine and bourbon giveaways really hurt, but good, true giving should hurt a little—heightens the feeling of true generosity…) 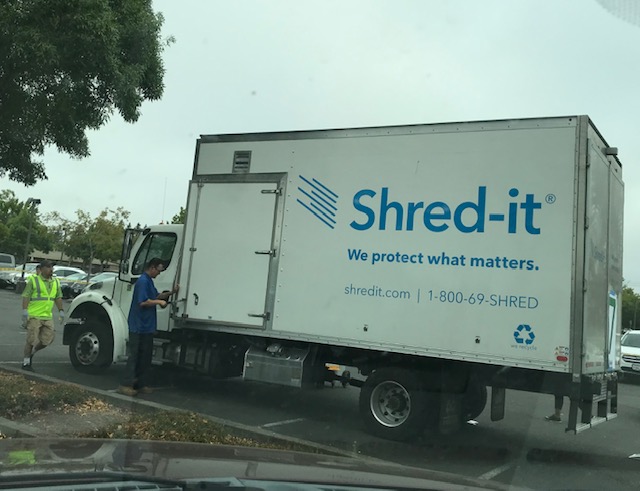 Not to forget, either, the shredding or recycling of hundreds of pounds of paper, so much paper wrought from so many trees I feel like my parents should have bought a small-but-fast-growing forest at my birth to offset the deforestation that my seeming addiction to paper has entailed.

I am making light of this here, but the truth is that moving was one of if not the hardest and most emotion-laden experience of my life, and the combination of physical and emotional expenditure it required over a sustained period has left me spent in a way I have never quite felt before.

No, I have not been kidnapped and left in a dark room for 700 days, have not lost my beloveds to a terrorist bomb or mass shooting, nor lost every possession in a sudden inferno. So all evaluations of hardship must be tempered by the understanding that many things in this life can be much, much worse than we have previously endured, and certainly more than I endured here.

Life need not be catastrophic to be hard.

I am also happy to add: In such trials, such great meaning. Of this there is virtually no doubt. 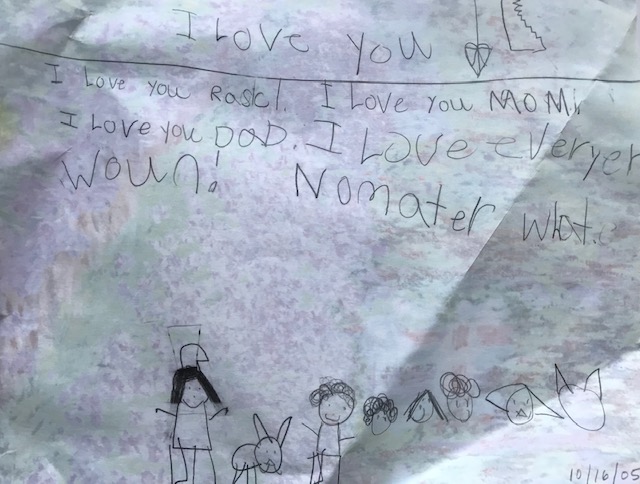 So I want to talk a little bit here about what a high regard I have for stuff.

I know, I know—it’s bad to have too much stuff, or to care about it. Very unspiritual.

Dust to dust, and all that.

Minimalism is next to godliness, and anyone transgressing against the Holy Church of KonMari risks a giant H being affixed to their reputation.

Lie, cheat, betray and defraud and you, too, can become president. But modern society cannot abide a Hoarder.

Central to the KonMari Method (“The Life-Changing Magic of Tidying Up”) are these lines:

“Keep only those things that speak to your heart. Then take the plunge and discard all the rest. ….The best way to choose what to keep and what to throw away is to take each item in one’s hand and ask: ‘Does this spark joy?’ If it does, keep it. If not, dispose of it. This is not only the simplest but also the most accurate yardstick by which to judge.”

Things that speak to my heart?

Does she mean several shoeboxes full of letters and cards from lifelong friends tossed into said boxes while on the run from one residence to another through my transient 20s and 30s?

As I was hauling the larger boxes in which these boxes had resided through the moves of many decades into the dining room, all of them something of a jumble, I was astonished and gratified to find entire caches of letters from certain periods of these friends’ lives.

One a trove of letters from a friend playing professional basketball in France after college.

Another a set of aerograms from a pal devoting his time to the Peace Corps in Africa.

A goodly number of them complete and happy surprises, their contents bringing these precious friends to life in a vibrant, essential way, good souls all.

And then, a small cache of letters I didn’t even know existed from a woman I met and then corresponded with for a little over a year starting in 1981 before we lost contact with each other. The same one who inspired my move east last week to join her, as it turns out, these nearly four decades later.

Does that comprise a full enough circle to “spark joy?”

Still more: a trove of letters from my parents, including far more than I remembered from my father, written in his native Hungarian with an elegant longhand. I had grown up speaking the language, but had never learned to read or write it until I visited Hungary in 1983 and I came back determined to pick up enough to sustain some basic written volleys with my father. The resultant correspondence was a great joy to him the rest of his life, as it was to me again in these recent weeks of rediscovery. 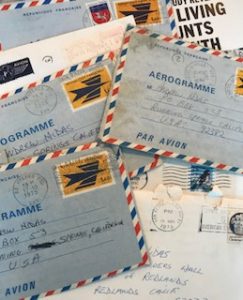 Found myself snagged by all these missives as I sat at my table surrounded by boxes and the grit shedding from them. I wound up reading for many minutes at a time before my inner timekeeper caught wind of what was happening and skooched me along. But I did manage to snap pics of various friends’ letters and to send text excerpts to the writers themselves with a “Look what I found!” note appended, receiving gratified and curious notes in return.

Sometimes I added photos I also found in my box excavations. I resolved to find more time in the near future (once my pod completes its cross country trek) to bundle these letters and photos and return them to the senders, given the snapshots they were at a particular, highly formative period of their lives. Perfect for any memoir or life recap they might want to put together for posterity—or just to hand over to a child who may appreciate them.

What they offered me was a zipline to my own past, a chance to flit in and out of these relationships and the love that they entailed, to revisit situations equally riotous and sober, ecstatic and embarrassing, most always with a warm funny glow.

I’m not so sure I decided specifically to save these letters as much as I decided simply not to throw them away. That may sound too subtle by half, a distinction without a difference, but from either perspective, these objects of pen set to paper are imbued through and through with the souls of those who took the time to write and convey them.

In each person’s radically distinctive handwriting, their equally distinctive thoughts and descriptions of both their external and internal lives flow forth like the most pleasing of waters, a material link to the soulfulness their lives have added to the collective goodwill of the world. I am fortunate to be in touch with most of these people today, that good fortune enhanced by my possession of these literal vestiges from their past.

In the case of those who have passed—among them my mother, father, and brother—it still brings me up short to see their handwriting, to open a letter and literally hear their voices speaking via the marvelous apparatus of my brain, where the timbre, pitch and modulation of their diction and laughter miraculously occupy and are summoned forth from a few million cells of gray matter where such memories reside.

It’s not just the letters, precious as they are.

Every ancient t-shirt or glass focuses me for a moment on the event it memorialized, and the people surrounding it at the time. Every hat brought back from a favorite destination or gifted to me by a friend who went there summons forth that place, that person.

One can spend time and money and occupy drawers and closets in far less meaningful ways than this. 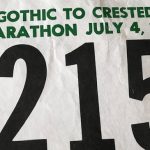 My intention here is not to imply that one should never make use of a thrift store, recycling bin or landfill to depart with items that might otherwise overwhelm one’s premises or life. But only to suggest that saying good-bye in the service of an absolutely uncluttered life may not always serve another, equally or more compelling need to maintain material links to our past, particularly when those links are to people whose voices and visages are summoned forth in joy and lasting regard from an item associated with them.

Nearly seven years ago, in a post titled “The Sacramentality of ‘Things,’” I wrote:

“But here, things matter. Things imbue our imaginations, trigger memories, inspire admiration and conversation and communion. Your delicate wind chime, my old mitt, this liquid in a glass on the counter that will soon be poured into this other thing called my stomach—all of it represents the only world we know, offering up its visceral pleasures, its sensory delights, its scratch to our sacramental itch.”

I recognize that this is a profoundly incarnationist view, holding that the creation is good, a thick bodiliness rather than thin minimalism being next to godliness. No world denial while awaiting a better fate up above or beyond.

Call me a closet Christian, if you will, taking the incarnation with the seriousness and sanctity it seems to suggest.

This world, here today, its things holy, its passing from one moment to the next, one thing to the next, including the very “thinginess” of our bodies themselves, redolent of the entire creation in its inexhaustible and tragic majesty that gives it whatever meaning we choose to give it.

The national treasure that is John Prine…

15 comments to Song of My Stuff