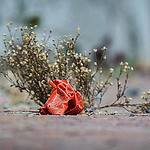 Not a derisive laughter, but a compassionate and accepting one, as an observation and admission of the depth of human folly, including my own.

In that moment, all the human elements—the homes, streets, cars, the beach parking lot with its logs and berms, the books I so treasured back on my shelves—struck me as frail and absurd, like those cartoons of a tiny man swinging his arms helplessly against a bemused giant whose hand remains staunchly on top of the helpless one’s head. I and all my fellow humans living in those homes, those supposedly secure bulwarks against the ravages of elements and invaders, were the tiny helpless ones, while Erosion and its cousin Entropy were the Giant, just awaiting its time.

Never before that moment had it occurred to me how doomed every coastal community is, how every home and hill all over the world will be reclaimed by the sea, how all of our building codes, construction safeguards and deep foundations drilled into bedrock are ultimately like the furiously inept flapping of bird wings trying to counter a tornado.

And the doomsday scenario wasn’t an issue of global warming back then, either, but something far more basic and elemental: the fact that life everywhere and at all times is impermanent. Maybe not today or tomorrow, but someday, all of us and everything will be washed back into the sea. 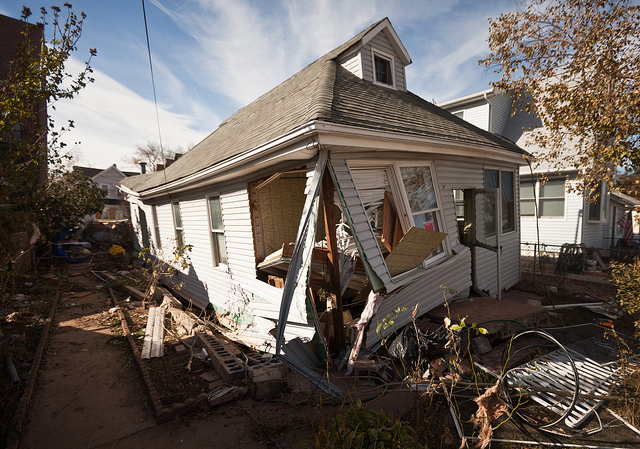 Acclaimed novelist Richard Ford delves into this basic state of impermanence and much else in his new novel, Let Me Be Frank With You, the fourth in his series of tales chronicling the inner life and cultural circumstances of Frank Bascombe, a highly literate retiree who narrates all four books in the series. Let Me Be Frank With You is unique in that it is actually four novellas, some 60 pages each, tied loosely together by Frank’s engagement with characters in his hometown of Haddam, New Jersey, in the aftermath of Hurricane Sandy in 2012.

A hurricane on the scale of Sandy is, of course, a bestowal of impermanence writ large on the landscape and the psyches of those inhabiting the Jersey shore. But in these tales, it’s a tragedy with plenty of company.

What little difference a house makes once it’s gone,’ Frank observes. We can replace ‘house’ with ‘people’ in that equation and bow knowingly to the inevitable flux and fading away that defines creation.

Frank is 68 years old now, a prostate cancer survivor. He lost a son many years ago, was divorced partly as a consequence of that calamity, is now happily enough remarried, and looks back with his customary droll, sardonic and merciless self-reflection upon a career that has included a failed attempt at writing fiction, a “settling” for being a sportswriter, and a final stint as a realtor. He wasn’t in Sandy’s line of fire, but his former beachside house that he sold to Arnie Arquhart eight years earlier was, and the first novella, “I’m Here,” has Arnie calling Frank in the aftermath of the house washing away in the storm.

It’s not as if the long-retired Frank can do anything for Arnie or should feel even a shred of responsibility for selling him a house that turned out to be situated perfectly in Sandy’s path. But Arnie has no idea where to turn or what he should do, and calls Frank as much out of a need for solace and sympathy as anything else.

Frank dutifully pays a visit, though he is himself not quite sure why he is being asked nor why he is responding. Perhaps it’s the same reason he puts in regular volunteer stints greeting returning soldiers from Iraq and Afghanistan and reading to the blind at the local community college. It’s just something a solid citizen does, even though Frank’s acerbic wit and dead-on dissection of people’s venality often leave him feeling more jaundiced than compassionate toward the human project.

(In one of the book’s many dark comic moments, he’s reading the notoriously bleak novelist V.S. Naipaul to his blind listeners and observes, admiringly: “Naipaul, despite apparently having a drastic and unlikable personality, is as adept as they get at throwing the gauntlet down and calling bullshit on the world.”)

The first novella’s title derives from the words of Native Americans hanged en masse in the 1860s, who apparently decided to make it into a declaration of solidarity and defiance before the trapdoor opened beneath them. It also represents the here/not here of those who survived and didn’t survive Sandy, and their houses along with them (or not).

“What little difference a house makes once it’s gone,” Frank observes. We can replace “house” with “people” in that equation and bow knowingly to the inevitable flux and fading away that defines creation.

“Gone but never forgotten” read the memorial notices in my daily newspaper, as survivors keep the memory of a beloved alive and flickering for those who remember the one or 10 or 30 years ago that he or she walked the earth, smiled and cooked noodles and played cards and made love and did killer Walter Cronkite imitations. For some people, the memorials appear annually for many years, serving as touching tributes from loving family members, until they too join their beloved in the land of “I’m not here.” 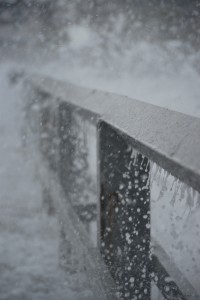 Over time, every person once alive becomes personally unknown to every other person still alive, all of us at best just an entry in the ledger of names in a family history—provided the family keeps a history. If it does, the details of every life become distilled and digested, a paragraph or two noted with a small sigh or “hmmm,” then passed by as the reader goes on to other names in the ledger.

Dust to dust, sea to sea.

In a profound sense, “I’m here” reflects our longing to exist and matter for eternity, not just the few days bequeathed to us as conscious creatures. The gods we create in response to that longing have the appointed task of recognizing us and affirming our existence for all the days beyond.

The irony running through all of Frank Bascombe’s musings in these four novellas and the three novels that preceded it is that for all his almost rote sense of civic and filial duty, Frank can be maddeningly disengaged and “not here” in the world and the lives of characters that he paints with such acuity. Fools fare rather badly under Frank’s magnifying glass, and we are all fools, including, to no small degree, Frank himself.

In perhaps the most powerful of the four stories, “Everything Could Be Worse,” Frank answers a knock on his door from a neatly dressed and coiffed black woman with a cast on her arm (hurricane injury), who relates that she once lived in the house, and might she prevail upon Frank to give her the briefest peek? In some richly comic exchanges, Frank stumbles all over himself to accommodate her, trying ever so hard to “bridge the racial divide” with almost absurdly self-conscious, enthusiastic responses. “Ms. Pines” is, in contrast, a study in self-possessed dignity.

But within his bumbling Frank does manage to allow Ms. Pines unfettered access to the home and the memories it holds for her. After page upon taut page of oblique conversation in which not much happens but everything is portent to an eventually shocking revelation, she shares the dark tale of her own harrowing history in the house. Somehow, she righted herself from that hurricane and made a life, now feeling the need for a few moments to pick through the wreckage it created in order to continue her reclamation project.

Meanwhile, Frank battles himself constantly, consenting to people’s demands upon his time and attention while a not-insignificant part of himself asks, in one form or other, “What the hell am I doing here? I don’t even like this person!”

In one scene, he is musing on the seemingly universal (near as I can tell), tendency to pretend not to recognize certain people from your past when you pass by them on the sidewalk or in the supermarket. About which Frank drily observes:  “We’re, most of us, the last person anyone in his right mind wants to talk to on any given day, including Christmas.” 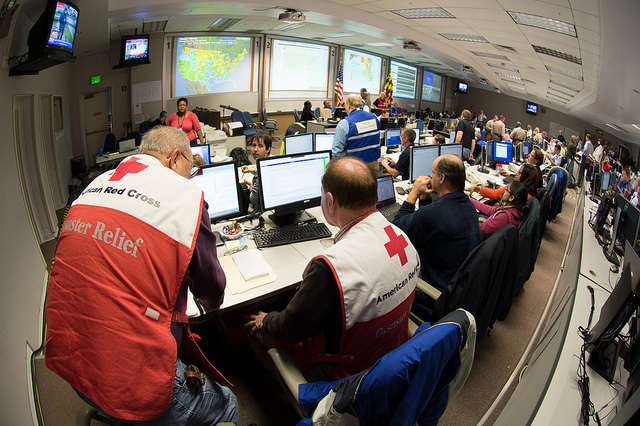 The third of the novellas is “The New Normal,” in which Frank consents to resume an up-close, platonic and rather strained relationship with his ex-wife, who, in the way of such things as people age, has developed Parkinson’s disease and has moved into an assisted living facility in, of all places, the same Haddam to which Frank returned earlier, and where they raised their two surviving and now adult children.

Frank’s observations on the “rebranding” of retirement homes where the elderly and increasingly frail seek a supportive pasture are predictably dark and sometimes achingly funny. On his way, good guy that he is, to deliver his ex a “special, yoga-approved, form-fitted, densely foamed and molded orthopedic pillow” so she can perhaps sleep better at night, Frank walks into the facility and observes:

“On display in the foyer is their ‘Platinum Certification’ from the Federation of Co-Axial Senior Life-Is-a-Luxury-Few-Want-to-Leave Society, based in Dallas—the national death-savvy research center. The goal at Carnage Hill is to re-brand aging as a to-be-looked-forward-to phenomenon…’Aging is a multi-disciplinary experience,’ the corporate brochure, Muses, wants applicants to know. Carnage Hill, following the theme, is thus a ‘living laboratory for Gray Americans’…I’m frankly surprised Ann’s practical-minded, Michigan-Dutch, country-club upbringing and genetic blueprint would let her stand one minute for all this baloney.”

Their conversation is a rich, gripping scene of colliding emotional needs as Eddie reveals a deep secret and Frank beats a retreat to the safe haven of somewhere, anywhere-else-but-here where a nearly dead man is unburdening himself with something Frank has no desire to hear.

“I lack the skill set,” he says of his inability to truly engage during deathbed visits. “Who’d want it?”

That’s certainly an arguable point, as countless people who attend deathbeds to profound spiritual affirmation can attest. But as a snapshot of a certain conflicted, alternately distanced-and-generous sensibility struggling still to understand the inscrutable mysteries and calls to action or inaction that life presents to us at every turn, this latest Frank Bascombe meditation is an inexhaustibly rich addition to an ever sturdier and more revealing body of work.
***

All right, so I was a little hard on Bob Dylan in my recent Joan Baez post. I’m going to make it up to him here by featuring his powerful and plaintive lamentation on the reality of advancing time.

For periodic and brief posts of inspiring words from the world’s great thinkers and artists, accompanied by the usual lovely photography as exemplified here, see my public Facebook page at: http://www.facebook.com/TraversingBlog

2 comments to State of Impermanence: A Review of Richard Ford’s “Let Me Be Frank With You”