Thanks, But No Thanks: Lisel Mueller’s “Monet Refuses the Operation”

We’re not much given to ecstasies, visions or fantastical disruptions of form, light and sound in the workaday world. Observe the social conventions, show up in the conference room at the appointed hour, monitor your in-box, and don’t say anything stupid or offensive on social media from the confines of your cubicle.

Keep that up for 40 or so years, let the IRA compound, then hunt for the perfect landing place—single-story, welcoming and with a woodsy name—to ensure your own version of domestic, senescent tranquility.

And then there are artists, whose creations, in the words of 20th century French philosopher George Bataille, inhabit “a minor free zone outside action, paying for its freedom by giving up the real world.”

I’m not sure artists “give up” the real world so much as they challenge the very foundations of what most people claim the real world is. Art has been conducting raids on rational, consensus reality for a very long time now—indeed, it seems to be fundamental to its very purpose and identity.

Those raids are intended to reveal what artists see as the shimmering supra-reality—bigger, wider, deeper, more inquisitive and layered and profound— behind the stout defenses held in place by the rational, the somnolent, the reductive.

An example of the kind of art that does that is below. 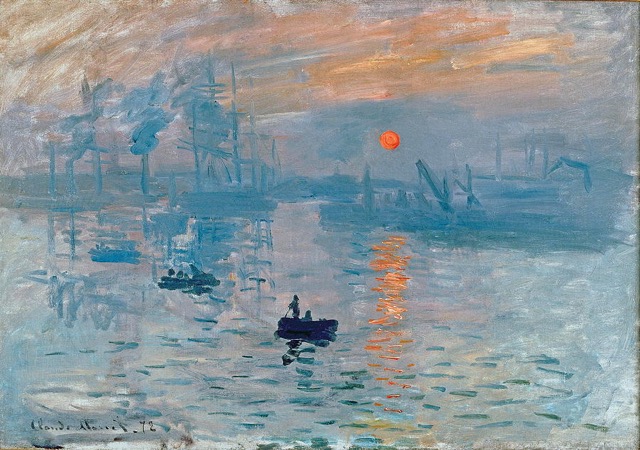 We see the artistic side of this long-running battle played out in the life and work of French painter Claude Monet (1840-1924). Long regarded as the “father of Impressionism,” Monet became and remains famous for his diffuse dreamscapes of vivid color and the thousand subtleties of light that he came to see as in a constant state of becoming.

Ever changing, light reflects the very essence of impermanence as the earth makes its journey around the sun, every tiny fraction of a degree notable for its transformation of light to the observant eye.

The 30 versions of “Rouen Cathedral” that Monet painted in 1892-93, each from a slightly different angle in different seasons and different times of day, are a testament to his near obsession with the mysteries of light, which he spent his artistic life exploring but never quite solved. Ditto for his dozen versions of “Bridge Over a Pond of Water Lilies.”

Little wonder he had written to a friend as far back as 1864:

“I want to struggle, scrape, start over again because one can do what one sees and understands, and it seems to me, when I see nature, that I am going to do it all, write it all out, but then go try to do it…All this proves that one must only think about this. It is by force of observation and reflection that one finds. So let us grind away and grind away constantly.”

Five versions of “Rouen Cathedral” bear witness to that “grinding” in this screenshot from Wikipedia. 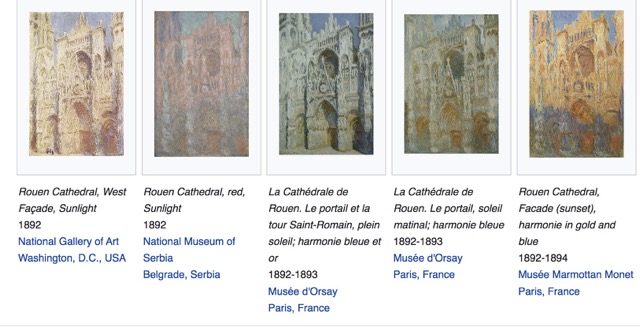 A fascinating interlude in Monet’s artistic development occurred when he began experiencing the effects of cataracts in his mid-60s, around 1905. Initially unconcerned with the slight distortions of vision that he parlayed into ever more diffuse imagery, he opted not to see a doctor until 1913, after the problem had begun to severely affect his perception of color itself and he resorted to labeling his paint bottles to distinguish one from the other.

A famously fussy and skeptical patient, he was prescribed new glasses and cataract surgery for his severely deficient right eye. He accepted the former but not the latter, fearing its outcome and preferring, he said, “to make the most of my poor sight, and even give up painting if necessary, but at least be able to see a little of these things that I love.”

It took him another nine years before he finally consented to surgery, after which enough of his former sight was reclaimed to compel him to destroy multiple works and touch up others from his “cataract period,” which he considered poorly colored.

It is that interim nine-year period that fascinated Mueller and initially inspired this post: a lovely poem by the German-American poet Lisel Mueller, whose work was previously noted here in her rhapsodic poem, “Joy.”

Mueller, who died just short of two years ago at age 96, took some artistic license with “Monet Refuses the Operation,” which she wrote in 1976 and included in her second volume, “The Private Life.” In it, she strongly suggests Monet refused cataract surgery simply to preserve the distortion it afforded him in furthering his artistic goals and rich internal life.

Not quite, it turns out.

But this is poetry, not biography, and in fashioning her own work of imagination in a different art form than Monet’s, she explores themes that are, in any case, fundamental to all artists, and to the veritable earthquake that Impressionism brought to the art world.

In Mueller’s telling, she elaborates Monet’s own rational and inspired argument for refusing the surgery, transmuting the malady of cataracts into a vigorous defense of a more profound artistic vision than Monet could ever have achieved with clinically perfect, 20/20 visual acuity.

In doing so, Mueller creates something beautiful and inspiring unto itself, a true work of art that stands for all time in solidarity with Monet, her partner here in revisioning the very idea of artistic vision.

Let’s read it below and then return for some closing commentary. 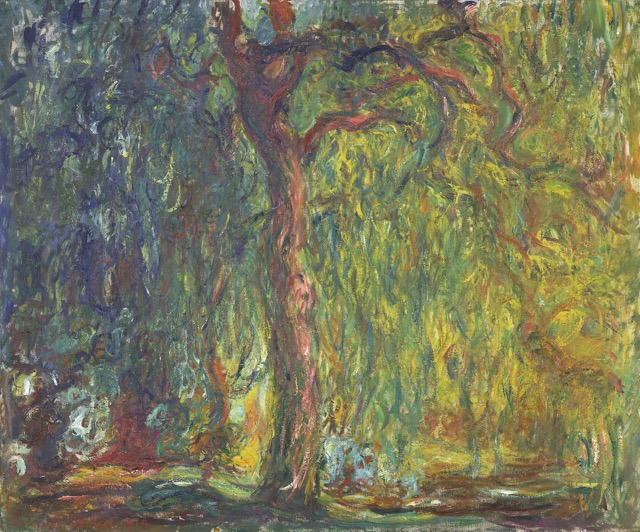 Doctor, you say there are no haloes
around the streetlights in Paris
and what I see is an aberration
caused by old age, an affliction.
I tell you it has taken me all my life
to arrive at the vision of gas lamps as angels,
to soften and blur and finally banish
the edges you regret I don’t see,
to learn that the line I called the horizon
does not exist and sky and water,
so long apart, are the same state of being.
Fifty-four years before I could see
Rouen cathedral is built
of parallel shafts of sun,
and now you want to restore
my youthful errors: fixed
notions of top and bottom,
the illusion of three-dimensional space,
wisteria separate
from the bridge it covers.
What can I say to convince you
the Houses of Parliament dissolve
night after night to become
the fluid dream of the Thames?
I will not return to a universe
of objects that don’t know each other,
as if islands were not the lost children
of one great continent. The world
is flux, and light becomes what it touches,
becomes water, lilies on water,
above and below water,
becomes lilac and mauve and yellow
and white and cerulean lamps,
small fists passing sunlight
so quickly to one another
that it would take long, streaming hair
inside my brush to catch it.
To paint the speed of light!
Our weighted shapes, these verticals,
burn to mix with air
and change our bones, skin, clothes
to gases. Doctor,
if only you could see
how heaven pulls earth into its arms
and how infinitely the heart expands
to claim this world, blue vapor without end.

We can imagine the scene:

“Street light haloes, I don’t think so,” says the impatient doctor, tapping his foot and already jotting the surgeon’s contact info on his referral pad.

And then in quick succession, the truly fanciful: gas lamps as angels (“Should probably refer him to psychiatry as well”).

Rouen Cathedral built from shafts of sunlight rather than brick (All right, that’s enough‚ out of my office!)

We might pity the poor doctor, other patients in the waiting room, his own eyes squinting into the eyes of countless others over many years, addressing the deficiencies of those eyes, which he has spent his life committed to healing.

But this patient in front of him, far from complaining, is waxing eloquent and rhapsodic about “how heaven pulls earth into its arms.”

And so it does—for those with eyes to see.

Monet paintings from the public domain

4 comments to Thanks, But No Thanks: Lisel Mueller’s “Monet Refuses the Operation”