At Seventy: Notes From the Zipline 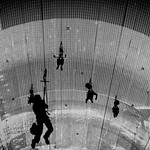 If I believed in an afterlife, I would state without hesitation that I’m gonna miss this planet when I’m gone and heading off somewhere else. This feeling grows all the more acute with age, given that with the passage of time and the abundance of good fortune I have enjoyed through a now long-in-the-tooth 70 years, life truly does get more precious and appreciated every day.

This could all change on a dime, of course, if my luck were to turn and I was struck by severe illness or debilitation. When life becomes merely bearable for the duration or unbearably wracked with suffering, then a final closing of the lids and fadeout loom as a most welcome attraction.

But after a birthday weekend of multiple events that included hosting a large gathering of folks for whom it represented the first substantial social occasion following the pandemic, it looks like this day will not be a fadeout day, and there’s every chance tomorrow and the day after that will not be either.

Projecting beyond then, however, risks getting ahead of myself, so as that book with which I have long maintained such a tenuous relationship says, “This is the day the Lord has made; let us be glad and rejoice in it.” 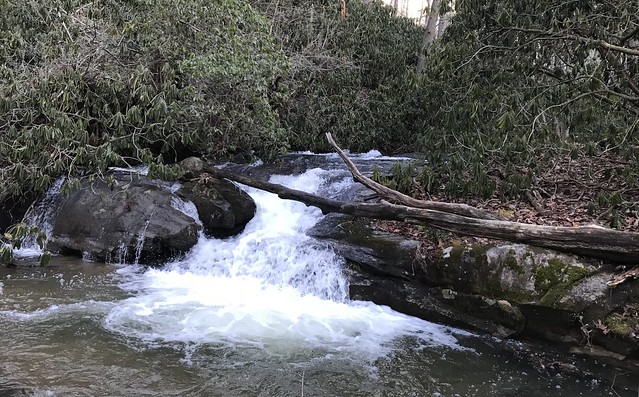 “How does it feel?” is the proverbial question one is repeatedly asked when hitting a milestone birthday. “Inevitable” would be one airtight, correct answer.

As one who has always tried to face life-as-it-is rather than life-as-I-need-it-to-be, I don’t expend much energy lamenting the crazy-fast passage of time. But the pace and true nature of that passage bears some reflection, it seems to me.

This is why the old cliche that age begets wisdom is fundamentally flawed. Not automatically, it doesn’t…
If we are fools in our essence, no amount of aging will make us wise.

Probably the most common sentiment I’ve heard my fellow old people express when asked the “How does it feel?” question is to express amazement that they are indeed as old as they are.

This strikes me as such a universal sentiment that humanity has to be either supremely self-delusional or there’s something of substance to the claim. I suspect the latter is correct—which might, I acknowledge, simply prove I’m as delusional as everyone else.

But if it is correct, I think it has to do with the experience and apprehension of time—a subject we took a crack at via German philosopher Martin Heidegger and English rock band Pink Floyd just more than a year ago, but which we’ll address in slightly different fashion here.

Time is commonly understood to proceed in linear fashion—“First I turned 20, then the 20s ended when I turned 30,” and so on. But as the decades and memories that comprise one’s past pile up, it seems to me it is perceived much more as a zipline with multiple stations, upon which one goes forward only as far as the present moment, but backwards at will, as far as one’s memory will stretch.

For my own part, careening on the zipline back to 60, 40, 25 and beyond feels ever present and available to me, both as memory that I revel in (and sometimes cringe over) and identity that I know myself as. Memory gets me back there in a hurry, bringing the past into the present lickety split. 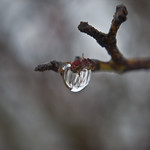 And what I discover there is what in many ways is a surprisingly fixed identity, a constancy, that belies much of what we like to think of as a steady change through maturity.

No, I’m not saying we don’t grow with the responsibilities and natural maturation of age. But at root, our character and interests, our proclivities and personal ways of being in the world, stay much more fixed than not.

We don’t so much become someone different than we were—it’s that we become more of who we are—for better and for worse.

If the ways that we were helped us flourish in our youth, all the better for our old age, but if they kept us stuck, we are likely grappling mightily still with their legacy. Most of us, being the flawed but well-intentioned and multi-faceted creatures we are, have both of these dynamics in play no matter what the calendar says.

This is why the old cliche that age begets wisdom is fundamentally flawed. Not automatically, it doesn’t.

We can do foolish things in youth without being fools (matter of fact, if we avoided all foolery in our youth, we were probably too timid by half). But if we are fools in our essence, no amount of aging will make us wise.

With age, our virtues blossom and further brighten us, but absent insight and self-forgiveness, our defects can gnaw at and wither our roots. 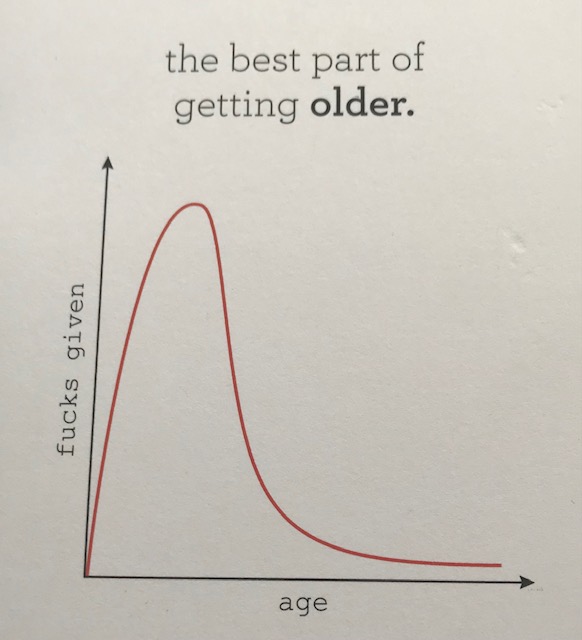 I got a lovely pile of cards from friends and neighbors the other day, many of them funny, others heart-felt, some of them both. The card above probably had me laughing loudest, which most always indicates something is not only funny but true. Which makes it a worthy way to bring this post to a close.

Oh, the deliciousness, at a slightly variable age depending on our sensibilities and circumstances, of being finally able and willing to say, “I don’t have to deal with THAT anymore!”

“THAT” meaning some oppressive employer or crazy commute or obsessive client, a won’t-ever-shut-up colleague, a toxic property or situation, finally unloaded.

There’s great liberation in loosening oneself from any forced unpleasantness, and it is virtually impossible to find anyone who doesn’t cite it as a chief perk of aging. The caveat, of course, is to examine whether loudly proclaiming, “Enough of that shit!” isn’t just an excuse for shutting down one’s curiosity and tolerance, and thus becoming an embittered rather than liberated old person.

There are times when the demands (and regular failures) of modern technology cause me days on end of running about town or countless hours on “support” lines with pleasant, no doubt underpaid young people from foreign lands reading from manuals.

Increasingly, they seem unable to help me while remaining cheerful to the end. Which is when I feel like screaming, “Support, fuh-shmort! I can’t wait to die so I never have to click on my Settings again!”

One can apply that sentiment to all manner of other things in a world seeming to have gone perpetually wrong, as 70-year-olds have been kvetching about since, oh, forever.

Somehow, the world seems to have refrained from slipping completely over the edge, all our carefully reasoned rants for its decline notwithstanding.

Although I think I’m less optimistic about the future of humanity than I used to be (climate, political oppression, artificial intelIigence…), I also realize it will be less and less my issue to deal with as I age out of this life. It really is much more up to the young people now, and it’s worth noting that whatever my worries about humanity at large, I have no shortage of optimism about the hundreds of actual young (or at least younger) humans I am privileged to know.

That, as much as any other single factor, keeps me, for now anyway, merrily cavorting along the zipline of life, cheered to be where I am at any given moment, appreciative of all the dumb blind luck that has allowed me there, and still awakening to each day with relish and reverence for what lies ahead—and behind.

Can’t help but notice that Mr. Gorka performed this song a bit more than five years ago, when I was a mere babe of 65…

13 comments to At Seventy: Notes From the Zipline