The Allure of Autocracy: Philip Roth’s “The Plot Against America” 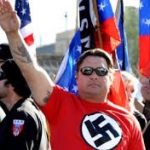 “France has been defeated, and despite the propaganda and confusion of recent months, it is now obvious that England is losing the war. (Audience cheers loudly.) I have been forced to the conclusion that we cannot win this war for England regardless of how much assistance we send. That is why the America First Committee has been formed.”

That’s from a speech in Manhattan by American aviation hero Charles Lindbergh in 1940, arguing passionately against American intervention in World War II. Lindbergh’s staunch isolationism was hardly an aberration in American life at the time. Much of the country was torn about how to respond to Hitler’s German war machine that was devouring much of Europe, the massive oceans on either side of our continent making gauzy dreams of remaining above the fray more inviting than almost any other country could afford to be.

In his 2004 novel “The Plot Against America,” the late novelist Philip Roth ran with the elements of Lindbergh’s long campaign against entering the war and the ferocious opposition he met in President Franklin Delano Roosevelt to create a terrifying alternate history.

Roth’s “What if?…” sketches a scenario in which Lindbergh challenges Roosevelt in the 1940 election with a campaign based on demagoguery and anti-semitic dog whistles. The upstart hero wins, and in the prescient way that great fiction sometimes exhibits, Roth presents eerie portents of the history that would begin unfolding just three presidential elections after the book’s publication.

That’s when Donald Trump was elected using similar divisive tactics, preaching a new isolationism, and, remarkably, establishing “America First” as a major theme of his administration. 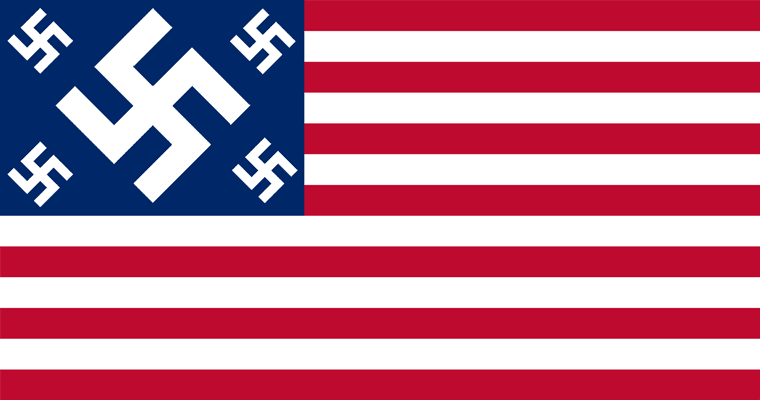 America’s frontier heritage seems to have combined with an almost genetic predisposition for self-identification as a fiercely independent and upwardly mobile people, impervious to “socialist” communal group-think and willing to die for the cherished individual freedoms the Founders enshrined in our Constitution.

With his mature novelist’s grasp of human psychology and its self-delusions, Roth shreds that and all myths associated with it. His compulsively readable tale shows how shrewd, would-be autocrats prey on people’s natural survival fears and wariness of the “other,” and can thus be maneuvered like so many chess pieces into a corner where the only way out is through the strength and control of the leader.

Roth does so through the voice of his narrator, a young boy named Phil, loosely based on his own childhood and family in his native Newark. The family occupies a rented flat in a secure, settled Jewish working class neighborhood of merchants and salesmen, with stout housewives tending the home fires. Assimilation occupies the inside lane next to Judaism here, in an environment where “nobody…had a beard or dressed in the antiquated Old World style or wore a skullcap either outdoors or in the houses.”

Furthermore, “Israel didn’t yet exist, six million Jews hadn’t yet ceased to exist, and the local relevance of distant Palestine…was a mystery to me,” Phil tells us.

But with the war fully engaged in not-all-that-distant Europe and reports beginning to come across the Atlantic of Jews there suffering oppression and outright terror, assimilation would not be quite the bulwark American Jews figured it should be in the Land of the Free. Especially not when a crafty demagogue comes into power who well knows the atavistic fears that can bore deeply into the hearts of all creatures, humans very much included. 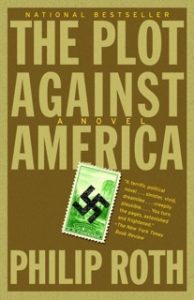 Those fears are ready for quick ignition when threats, real or not, resound through the air. The idea that humankind is impervious to such fear, and cannot have it stoked to inspire heretofore unimaginable brutality, is a story we tried to tell ourselves beginning with the Enlightenment, but which has since been demolished by history’s unrelenting atrocities, many of the most notable occurring in the 20th century.

When Phil’s peace-loving father, in wholesale contradiction to “the pervasive, unwritten prohibition” among Jews “against settling disputes by force,” gives in to a furniture-shattering near fight-to-the-death with the nephew he helped raise but who has since turned into a bejeweled dandy flush with mob money, Phil’s world shatters as well.

With even their home no longer safe from the rage, fear and malevolence of streets heavily patrolled both by Lindbergh’s law enforcement minions and a Jewish vigilante force still trying to protect what is left of Jews’ diminishing freedoms, there seems to be no safe haven left, no path back to the world he had known.

“Before that night, I’d had no idea my father was so well suited for wreaking havoc or equipped to make that lightning-quick transformation from sanity to lunacy that is indispensable in enacting the unbridled rage to destroy.”

That capacity for “lightning-quick transformation” reveals the thin line that has always separated, however tenuously, our baseline instinct for survival from the subsequent cultivation of civility and the higher virtues of compassion, generosity and love. But with an encroaching autocracy that is rooted in fear, blames outside forces for bringing it on, and promises the masses security by eliminating or neutralizing those forces, it is oppression rather than compassion that rules the day, greed rather than generosity, fearful hate rather than love.

More than 20,000 American Nazis rented Madison Square Garden in the heart of cosmopolitan, multi-cultural New York City in 1939, there to offer each other Nazi salutes and to praise the distant but close-to-their-hearts führer from across the sea.

In the summer of 2017, a lesser number joined in a “Unite the Right” rally in Charlottesville, Virginia, home to the storied university founded by Thomas Jefferson. They gathered to assert their First Amendment right to proclaim white supremacy and oppose the removal of statues celebrating the exploits of slaveowners in the American Confederacy barely 150 years ago.

They were also included, perhaps haplessly from a too-freely associating American president, among “good people on both sides” who were simply holding a different point of view than their counterparts across the way.

Such movements have always occupied a place in stunted human imaginations. The problem is that such imaginations have rarely shied away from seeking to grasp and assert their power.

Indeed, they often do so with far less trepidation and self-restraint than do those whose imaginations encompass a more rounded view of human foibles and the capacity for cruelty that always lies coiled like a snake at the base of human fear.

And always, it is fear that fuels the allure of autocracy and invites a self-styled, “only I can fix it” savior to offer himself up to the role.

Given the right economic-political-cultural moment, such a figure can rise up, accruing power by preying on people’s worst imaginings, their lesser angels, their longings to be delivered from the pains and pressures that cloud their every thought.

“I was still too much of a fledgling with people to understand that, in the long run, nobody is a picnic and I was no picnic myself,” Phil muses toward the end of his story as the innocent world he had known is now almost completely blown apart, travesty abides and an uncertain future awaits.

As a dark meditation on the underside of human progress and our vulnerability to the mendacious but perversely soothing invitations of a would-be oppressor, “The Plot Against America” stands as a chilling, exquisitely wrought warning shot against any complacency we would dare cling to.

Nazi photo, flag and book art from the public domain.

8 comments to The Allure of Autocracy: Philip Roth’s “The Plot Against America”